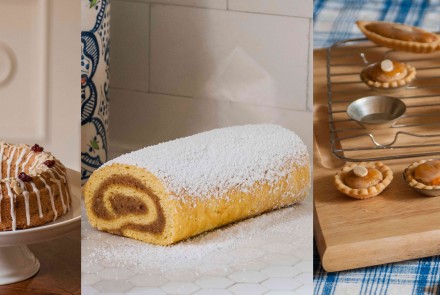 Home baking has recently been given a big boost by the popularity of the award-winning BBC television program The Great British Bake-Off.

The show got off to a wobbly start in 2010 but within four years rose in the ratings like a successful soufflé. The final segment of season five, which appeared in October 2014, attracted more than 13 million viewers, making it one of the most-watched shows in the United Kingdom behind only the World Cup soccer match between England and Uruguay.

The program started appearing on American television screens in January, with a broadcast of the fifth season. Very curious, I watched and thought: “Hey, we needn’t feel left out. Just about anything they can bake can be made gluten free.”

A far cry from American reality food shows, The Great British Bake-Off is a televised competition that pits 12 amateur bakers against each other for top honors but no monetary prize. In their daily lives the contestants are construction engineers, housewives, furniture restorers, even a retired Merchant Navy radio operator.

Each week the entrant who gains the most points is acclaimed “Star Baker” and the unfortunate soul at the bottom of the heap gets banished. The judges are cookery writer Mary Berry and the somewhat testy professional baker Paul Hollywood.

In the first segment that I watched, the dozen nervous contestants were given three challenges:

The producers of the show must be onto something. Licensed spin-offs are now being created and aired in Australia, Belgium, Denmark, Finland, France, Germany, Ireland, Italy, Netherlands, Norway, Poland, Sweden, Turkey and Ukraine.

But so far nobody has thought of presenting the show in a gluten-free format. Just for the record, you read it here first.

To meet the self-imposed challenge, I set to work and baked gluten-free versions of a Cherry Ring Cake, a Hazelnut & Honey Swiss Roll and a batch of miniature Bakewell Tarts.

They are all perfect for a British-style afternoon tea, but of course you can serve these elegant desserts anytime you like. And a butler is strictly optional.