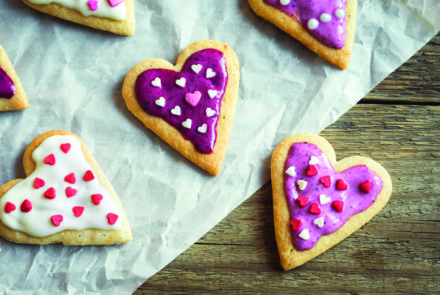 Subscribe today to Gluten–Free Living magazine and receive recipes, advice and much more brought right to you!

Valentine’s Day is synonymous with chocolate—but it isn’t all about chocolate, right? Sugar cookies shaped like hearts dusted with colored sugar, dipped in chocolate or covered with frosting are a big draw at my house. Making them with my daughter has become a treasured family tradition. We have learned from our failures and adjusted to perfect our roll-out and cut cookie game over the years. If we can do it, so can you. To help get you in the roll-and-bake spirit, here are my top five tips for rolling out gluten-free sugar cookies.

Follow these steps and get ready for beautiful sugar cookies that are crunchy on the edges and and soft in the middle. Make a double batch, because they will quickly become a family favorite and disappear in a flash. 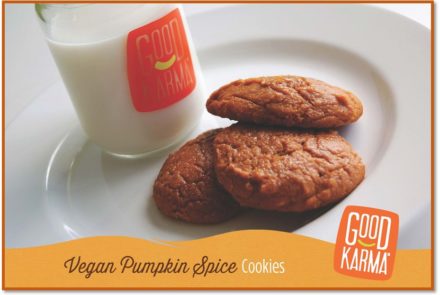 This recipe for vegan gluten-free pumpkin spice cookies produces the perfect seasonal treat. Made with pumpkin spice nog that is free of dairy, nuts, soy and gluten, bake up a batch for any get-together this fall. 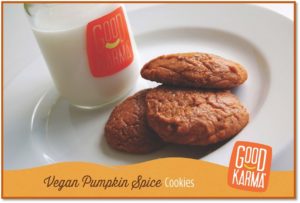 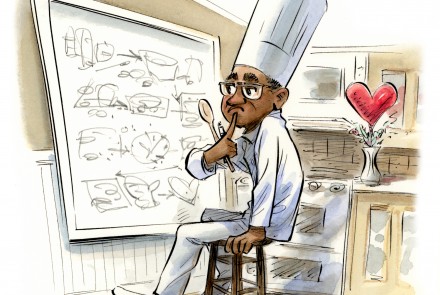 Whether baking for your child’s Valentine’s Day party or your sweetheart, use these seven tips to produce the perfect batch. 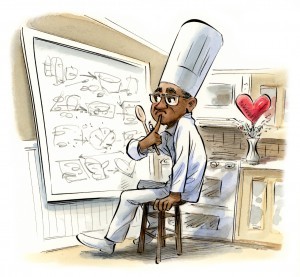 A perfectly baked cookie can delight people of all ages. Yes, even gluten-free cookies. While recipes vary depending on the type of dough, flour and other ingredients, using the best-quality ingredients is the first step in creating a little piece of heaven. Here are seven tips for getting the most out of your cookies. 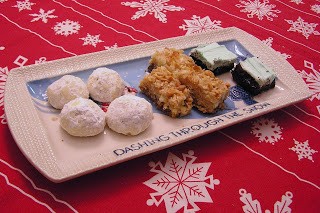 In my last blog I wrote about trying some new cookie recipes from General Mills “live gluten freely” website.

I’m happy to report that not only did they look very appealing, they tasted great too.

The Russian tea cakes had the traditional short-bread texture, softened a bit by the powdery confectioner’s sugar. No one suspected they were made without wheat flour. And surely no one would have guessed the key ingredient was gluten-free Bisquick.

The grasshopper bars are made with a base of Betty Crocker gluten-free devil’s food cake mix, topped with creamy icing tinted green and flavored with mint. They were easy to cut and  the bottom held together unlike some gluten-free bar cookies that crumble. They tasted moist and had that terrific combination of chocolate and mint.

Since these two recipes turned out so well, I was encouraged to try at third from the website, holiday layer bars. I had originally put the recipe aside because it uses the Betty Crocker chocolate chip cookie mix. I don’t like the mix because it results in cookies that have that tale-tell gritty gluten-free taste and so many other chocolate chip recipes make much better cookies for less money. And the recipe called for candied cherries, which look and taste like plastic to me.

But I decided to just skip the cherries and see if this recipe, too, was a keeper.
The cookie mix forms the base of the bar, which is then topped by a mix of white baking chips, coconut, cashews and sweetened condensed milk. You end up with a rich, chewy bar. I think the rich topping helps cut the grittiness of the cookie bottom.

So I will file all three in my recipe box. You can find the recipes here.

There was a ripple of news on social networking sites yesterday about the future of Anheuser -Busch’s gluten-free Redbridge beer. On Twitter there were tweets that said the company was planning to discontinue the beer next month.

But a company spokesman late yesterday told Gluten-Free Living the beer giant has no plans to discontinue Redbridge in the near or distant future. He was perplexed about the rumor and said he had no idea where it might have come from.

Just recently, Gluten-Free Living was told that the beer was selling extremely well, so we were not sure what to make of rumors of Redbridge’s demise. Until we officially hear otherwise, we are going to count on the continued availability of a product that is appreciated by a significant segment of the adult gluten-free community.

In other news about gluten-free offerings from a well known national chain, Starbucks is now selling”lucy’s” gluten-free cookies at select locations. The Virginian-Pilot reported that Starbucks this week began stocking the Norfolk company’s cookies in 6,000 of Starbucks’ 11,000 locations nationwide. The newspaper said Starbucks is waiting to see how successful they are before saying anything about further availability.

The pre-packaged cookies are part of Starbucks lineup of “on-the-go” snacks. Chocolate chip, sugar and cinnamon flavors are available at $1.50 for four or $5.95 for 16. In addition to being gluten-free, the cookies do not contain milk, butter, eggs, casein, peanuts or tree nuts. They are also cholesterol and trans fat free. Several stores, including Whole Foods, also sell them.

In addition to “lucy’s” cookies, Starbucks this week added a variety of gluten-free snacks, including Food Should Taste Good chips, Two Moms in the Raw granola, several fruit snacks, and nuts.

The company discontinued it’s pastry-case gluten-free Orange Valencia cake almost as fast as Conan is being squeezed off the Tonight show at NBC.

We’ll have to wait to see if the gluten-free cookies get a longer run, more like Jay Leno.