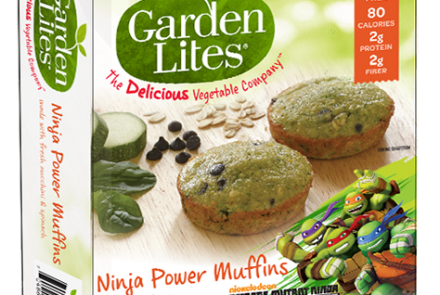 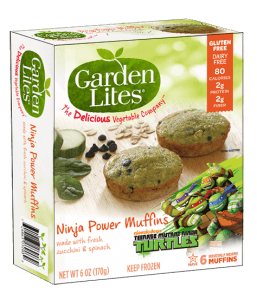 Packing kids’ lunch is great. After all, it gives your food the chance to get out of the house for a few hours. Oh sure, the crackers are gone—but the fruits and vegetables have returned untouched and, quite frankly, looking pretty sad.

In their quest to produce delicious veggie-rich foods that even kids will eat (voluntarily), Garden Lites has created a line of gluten-free muffins. Like all of their products, the first ingredient in each variety is vegetables. Have a Ninja Turtle fan at home? The gluten-, dairy- and nut-free Ninja Power Muffins are 80 calories—and the first ingredient is zucchini.

Parents can pack the individually wrapped, frozen muffins in their children’s lunchbox in the morning and by lunchtime, they will be room temperature and ready to eat.

The muffins are available in seven gluten-free, veggie-first varieties. To find a store near you, use the Garden Lites store locator. 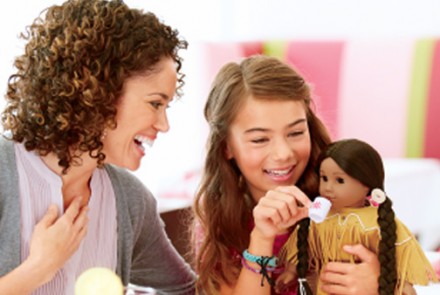 American Girl stores are synonymous with dolls and accessories created in perfect miniature, hair salon treatments and excited children trailed by exhausted parents or grandparents. But dining is also part of the experience, and the American Girl Bistro includes a variety of gluten-free options. Pizza, pasta, chicken fingers, spaghetti, macaroni and cheese, fries, cake and more are available in gluten-free versions. Restaurant teams work individually with each guest to craft a meal that meets dietary needs. The bistros serve brunch, lunch, dinner and dessert.

American Girl gets its gluten- and allergen-free products from companies including Gluten Free Nation, Udi’s Gluten Free and Rich’s.“The landscape of gluten-free products is constantly evolving, and we work with our distributors and manufacturers directly to be current on the trends,” says Engel.

When a gluten-free order is requested, a manager comes to the table to go over the guest’s needs before communicating the order directly to the kitchen. The chef, who puts on clean gloves, has been trained to use dedicated utensils, plates and cookware when preparing the meal. Items including French fries and chicken  fingers are baked to minimize the risk for cross contact.

Dessert, one of the best items on the menu, is always available for gluten-free
diners, and the bistros don’t just offer ice cream. For example gluten-free lemon
pound cake is available daily at the Alpharetta, Georgia, location.

After the shopping trip in the American Girl store, the bistro serves as an oasis,
offering children and their guests a spot to relax and refuel or celebrate a birthday or other special occasion. Visitors’ dolls get a prominent seat at the table, complete with a mini place setting. The menu, which rotates three to four times a year, offers tea service, starters, main course and desserts served in precious dishes, such as flower pots complete with plastic flowers each doll can hold.

Reservations are highly recommended, and reservation agents will inquire about
food allergies/intolerance while booking. The menu’s disclaimer reminds guests to inform their server if anyone in their party has a food allergy.

I read recently about the mother of a celiac child who had discovered that her teenager had been routinely eating food that contains gluten for the last year.

Her story brought me up short because it laid bare the fear that every parent of a celiac teenager secretly lives with.

And it emphasized the unique world we mothers and fathers live in, separate even from those adults who have celiac disease and can make their own decisions. All of our specially made gluten-free pizza pies and chocolate cakes, all our knowledge about gluten in ingredients, all our pantries full of gluten-free pretzels, crackers and pasta don’t make a difference if our children choose to cheat on the diet.

Simply, we are not in control, at least not once our children start eating out of our eyesight and beyond our lovingly packed brown bag lunches. Though we may keep it to ourselves, our worries rev up when they drive off with friends for what should be an innocent lunch or dinner out.

Still, we rely on the hope and a prayer that we have taught them well about the necessity of eating gluten free. When our sons and daughters were little, we did not want to scare them or cripple them with dire predictions of what would happen if they ever succumbed to the lures of food that’s perfectly safe for everyone else, but poison to them. But now we wonder if a little fear isn’t a good thing.

All we really have is trust. And maybe a little delusion even when presented with the possibility that our children might have had the occasional slice of pizza or breaded chicken finger. But what happens when we have the facts, when they admit to us that they’ve been eating gluten frequently?

I put the question directly to my own 18-year-old daughter, a college freshman living away from home for the first time. What would she say to this worried and frightened mother whose son has been eating breaded sesame chicken two or three times every week ?

My daughter responded right away — it seemed she wanted to be helpful. “If he eats it two to three times a week he must really like the Chinese food, ” she wrote in one of her rare emails to me. “I would probably suggest finding a gluten-free version that he can eat instead.”

Beyond that, she admitted knowing what it’s like for the boy. “I can understand the pressure, especially around that age. Not that kids would try to get him to eat wheat. But once you get to the age when you can drive with your friends, if they all go out to eat, I can see how it would be easier to just eat what they have,” she explained.

And since Chinese food has always been a favorite in our family, she knows that you can order plain steamed dishes that are gluten free and suggested he try that. But she had further insight. “For boys it probably isn’t as easy to order foods that aren’t like everybody elses without feeling different. He probably is sick of dealing with the diet and finds it easier to just eat the gluten version.”

I was impressed that she was trying so hard to come up with good advice while remaining empathetic. She earnestly asked at the end of her email if she had given me the kind of answer I wanted. And she did.

But I realized there was another part that perhaps I needed. I needed for her to write that she had never purposely eaten a food she knew contained gluten (aside from the one time she tried an Oreo cookie as little girl), forget about doing so occasionally or regularly. I needed her to remind me that she knows lack of symptoms after eating gluten doesn’t mean damage isn’t being done. But she didn’t write about herself at all.

I don’t have my reassurance. I just have my trust.