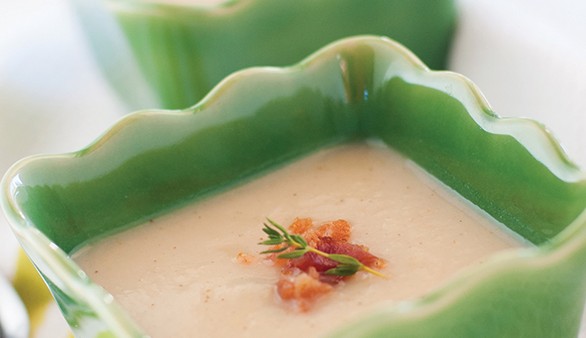 Cook bacon slices until crispy in a large soup pot. Remove bacon to a paper towel (chop when cool, for garnish). Discard most of the bacon fat, leaving about 1 tablespoon in the bottom of pan.

Toss the leeks, shallots and celery into the pot with a generous amount of sea salt and freshly ground pepper. Sauté in the bacon fat over medium heat for 4 to 5 minutes or until the veggies soften.

Add the garlic cloves, potatoes, water, cayenne and thyme. Bring to a low simmer and cook for 25 minutes, or until potatoes are fork tender.

Using an immersion blender (or in small batches in a blender) purée the soup until smooth. Adjust seasonings by adding additional black pepper and approximately 1 teaspoon of salt. Garnish with crumbled bacon.

Cook’s Tips: Corn-free bacon can be difficult to find because caramel color and natural flavors can be made from corn. Applegate Sunday Bacon is gluten free and corn free.

Recipe by Terris Cleary, a graduate of the California Culinary Academy, who has celiac disease and whose son has multiple food allergies. She blogs about gluten-free, allergen-free recipes at freeeatsfood.com.