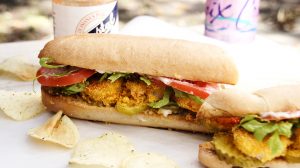 Where do I begin in explaining the excitement that, yes, YOU can still partake in a New Orleans classic—the po’ boy—even though you are gluten free?! This is my gluten-free New Orleans-Style “Fried” Shrimp Po’ Boy. It gets better—this po’ boy recipe is actually better for you. Say what?! That’s right, instead of frying the shrimp, as they are traditionally prepared, I’ve baked them to keep this dish a bit lighter. The saying here is that you can judge a good po’ boy by how many napkins you need to use while eating your way through it: “That oyster po’ boy from Guys is a 12 napkin-er.” I’m happy to say this baby is a solid eight-napkin po’ boy, so be prepared for this delicious, heavenly mess.

Slice the baguettes in half lengthwise and bake as directed, till slightly crispy on the outside but still soft on the inside, about 10 minutes. Set aside when cooked, but keep the oven on.

Spray a large baking tray with cooking spray and set aside.

While the baguettes are cooking, prepare the shrimp: mix the mayonnaise and hot sauce together in a medium bowl till well combined. Add the shrimp to this mixture and stir so all of the shrimp are well coated.

In another medium bowl, combine the corn grits and Cajun seasoning and stir to mix well.

Transfer the shrimp from the mayonnaise mixture into the seasoned grits mixture and make sure each shrimp is well coated on all sides before transferring to the prepared baking tray. Work in batches until all of the shrimp are coated and on the baking tray.

Spray the top of each shrimp lightly with a bit of the cooking spray and bake at 400° F for 12 to 14 minutes, or until the tops are slightly golden brown.

Cut each baguette in half, which will ease the assembly process.

Spread a generous bit of mayonnaise on each baguette. Next, layer on slices of pickles and a generous handful of the baked shrimp, followed by a handful of shredded lettuce. Layer the tomato slices on the remaining baguette halves and carefully flip to top the other baguette halves, pressing down slightly. Thankfully, you already sliced the po’ boys in half so you don’t have to worry about making too much of a mess when cutting. Eat straightaway. Serve with hot sauce, chips if desired and plenty of napkins.

Jilly Lagasse began cooking as a child when her father, Chef Emeril Lagasse, gave her a set of chef’s whites and let her help in the pastry and dessert department in one of his restaurants. She was diagnosed with celiac in 2004 and has written two gluten-free cookbooks with her sister, Jessie Lagasse Swanson, as the duo The Lagasse Girls, lagassegirls.com.