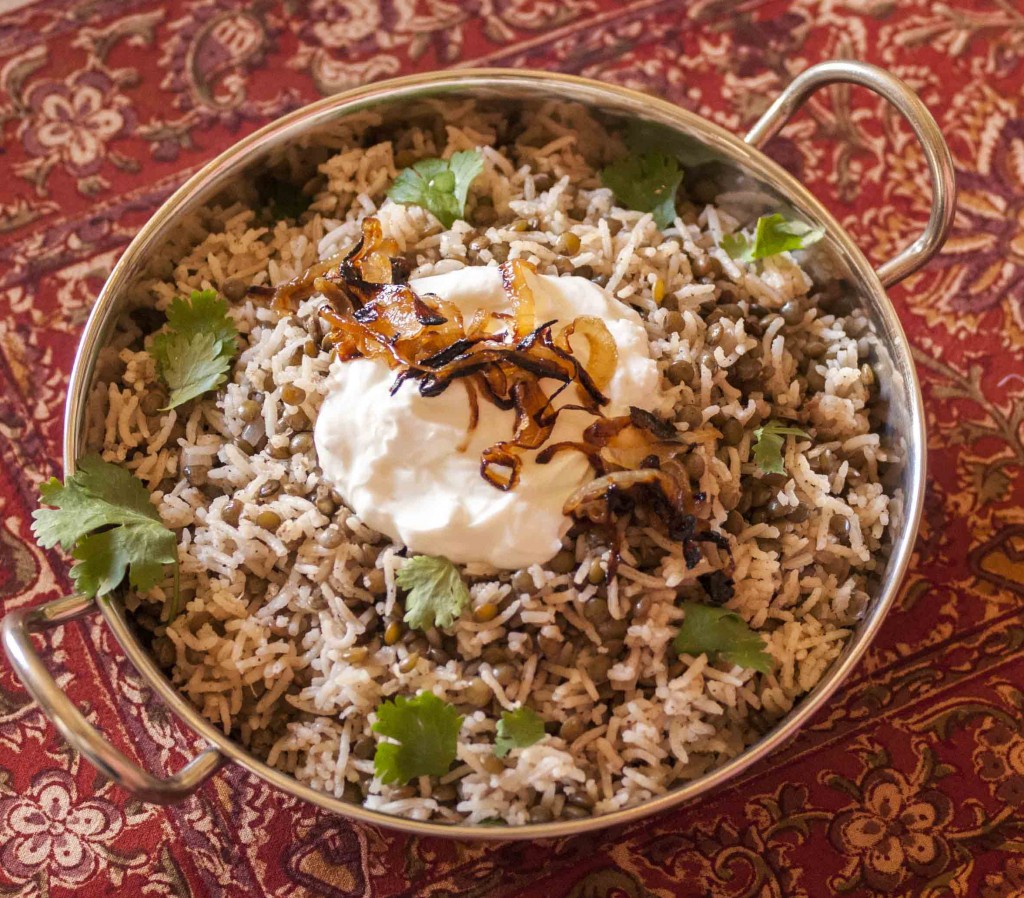 In the Middle East the first recorded recipe for a lentil and rice dish called Mujaddara appears in a 10th century cookbook, Kitab al-Tabikh, or A Book of Dishes, compiled by Ibn Sayyar al-Warraq. It was a banquet item for the wealthy made from spiced lentils, rice and meat. The less affluent also consumed it—without the costly meat—with enthusiasm. This time-honored combination of lentils and rice, with its garnish of caramelized onion, is still delicious today, with or without roasted lamb.

Variations on this recipe are popular throughout the Middle East. Cooking the lentils and rice separately ensures the right texture for both. The delicious caramelized onion garnish needs slow, gentle cooking, so it’s best to start that component first.

Heat 1 tablespoon of the oil in a 10-inch skillet, preferably cast iron. Add the sliced onions. Cook gently over medium-low heat until deep brown, turning the onions over occasionally but resisting the urge to stir, about 25 minutes. Season with salt and pepper.

Combine the lentils with the broth in a saucepan. Bring to a boil, reduce heat, cover, and simmer until tender, about 25 minutes.

Drain any remaining broth, and season lightly with salt and pepper.

Meanwhile, heat the remaining 2 tablespoons of oil in a separate saucepan. Add the chopped onion and cook until translucent, 5 minutes. Stir in the garlic, coriander and cumin and cook until fragrant, 30 seconds. Add the rice and mix well. Pour in the boiling water and ½ teaspoon salt. Cover and simmer over low heat until the rice is fluffy, 17 minutes.

Stir the lentils and rice together and taste for seasoning. Top each serving with yogurt and caramelized onions. Garnish with the cilantro.

Gluten-Free Living Food Editor Jackie Mallorca has over a dozen cookbooks to her credit. Her latest titles include The Wheat-Free Cook and Gluten-Free Italian.