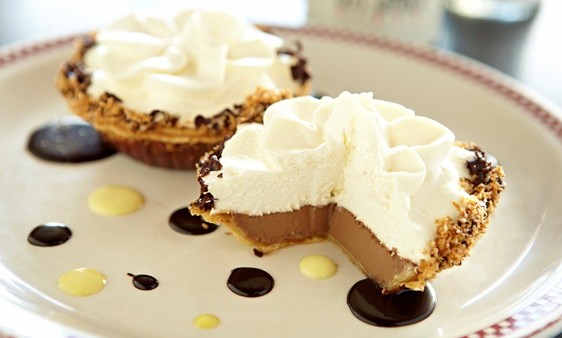 Pie Dough
Preheat the oven to 325° F. Combine all pie dough ingredients by hand until mixture comes together. Press the dough into six 5-inch pie tins. Bake for approximately 10 minutes or until golden brown. Remove from the oven and let cool.

Filling
Preheat oven to 250° F with rack in the middle position.

Scrape seeds from vanilla bean into a 2-3-quart heavy saucepan with tip of a paring knife. Add the vanilla pod, milk, cream and sugar to the pan and bring just to a boil, stirring until sugar is dissolved.

Add the chocolate and cook over moderately high heat, stirring gently with a whisk, until chocolate is melted and mixture just boils. Remove from heat.

Pour the mixture into a metal bowl and set the bowl in a larger bowl of ice and cold water. Cool to room temperature, stirring occasionally, about 5 minutes.

Whisk in the yolks and pour the mixture through a fine-mesh sieve into a 1-quart measure, discarding the pod and any other solids.

Divide mixture among pre-baked shells. Bake until the pudding is just set around the edge, 40-50 minutes. Centers will wobble slightly when shaken.

Remove from the oven and let cool. Top with freshly whipped cream.