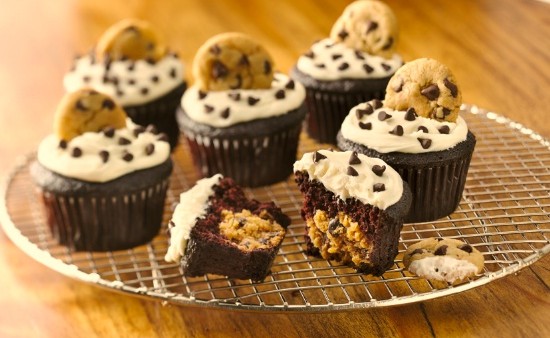 2. Make twelve 3/4-inch balls of cookie dough; place on ungreased cookie sheet. Bake 5 to 6 minutes or until golden brown. Cool completely. Set aside to decorate the top of cupcakes.

5. Spoon slightly less than 2 tablespoons batter into each lined muffin cup, about half full. Place 1 cookie dough ball in center of cupcake batter in each muffin cup. Cover balls with another spoon of batter, about three-fourths full.

6. Bake 28 to 30 minutes or until toothpick inserted in center of cupcake comes out clean. Cool about 30 minutes.

7. Frost cupcakes with cream cheese frosting. Top each with mini cookie from step 2, and sprinkle with mini chocolate chips.