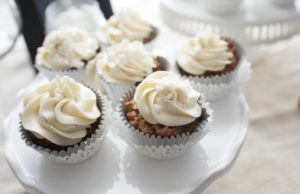 Be sure to grab one of these scrumptious Almond Coconut Cupcakes quickly because they will disappear almost as soon as you set them out.

In the bowl of an electric stand mixer, beat egg whites until soft peaks form and carefully slide into a separate bowl.

In mixer bowl, cream together butter and coconut sugar until light and fluffy.

Carefully (by hand with a spatula) fold in beaten egg whites in three batches.

Bake for 18 to 20 minutes, or until tops spring back when lightly touched.

Move to a cooling rack and allow to cool for at least 1 hour before frosting.

For frosting, in the bowl of an electric stand mixer using the whisk attachment, whip together butter and honey until light and fluffy.

Spoon into a piping bag and pipe onto cooled cupcakes. Sprinkle with additional flaked coconut.

Recipe and photo by Angela Sackett, a photographer at Legacy Seven Studios and writer at saletlux.com and dancingwithmyfather.net, where she shares recipes and hospitality tips.