For someone who has just received a gluten-sensitivity or celiac disease diagnosis, the news can be both welcome and overwhelming. With so much to learn about the gluten-free diet, it can be easy to focus on what one has to give up versus what one gains. But as we observe Celiac Disease Awareness Month, take a moment to focus on the wonderful things that happen following a diagnosis.

As Michael De Cicco-Butz knows well, the most important gain a diagnosis leads to is health. Twenty years ago, after years of not feeling well, a celiac diagnosis changed his life. 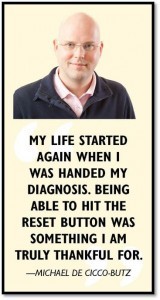 “It was hands-down one of the best things to ever happen to me,” says De Cicco-Butz, who works as a consumer insights executive and runs the gluten-free luxury blog glutenfreemike.com.

“Prior to my diagnosis I was actually not well and had no idea what was going on,” says De Cicco-Butz. “I would sometimes get ill when I would eat or drink something. There seemed to be no rhyme or reason as to when it would happen.”

When De Cicco-Butz was diagnosed with celiac, his world completely changed. “At face value it seems obvious, but in actuality my celiac diagnosis was the most empowering experience of my life,” he explains. “It may sound strange, but it allowed me to live the life that I wanted to on my terms—not having to worry about the effects that gluten was having on my health.” Today, he travels the world and shares his gluten-free experiences—particularly with hotels, restaurants and airlines—with Gluten Free Mike’s readers.

Like De Cicco-Butz, Jules Shepard, the owner of gfJules.com and an advocate for the gluten-free community, also feels positively about her diagnosis in 1999. “I’m happy that I have a celiac diagnosis,” says Shepard, who, like many others, was not diagnosed right away. Physicians could not determine the cause of her symptoms or even agree on a diagnosis. Today, she feels very fortunate to have “people respect the celiac diagnosis” because, as she explains, not everyone gets that respect from those around them. 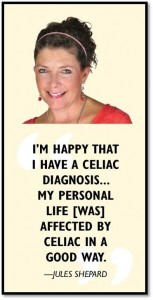 Shepard’s diagnosis presented a chance to focus not just on eliminating gluten, but on looking at her whole diet. Before her diagnosis, she explains that she “knew where food came from, but didn’t dwell [on it].” Following the gluten-free diet, which entailed spending a lot of time reviewing ingredients and labels, got her thinking about what she was putting in her pantry and, more importantly, her body.

“My personal life [was] affected by celiac in a good way,” Shepard notes. Once on the gluten-free diet, her food awareness “skyrocketed,” leading her to become a “much healthier person” because of changes she made to her lifestyle, including eating out less and regularly cooking at home with fresh, locally sourced ingredients whenever possible.

She is “thrilled to have had [her] eyes opened” to new ways of thinking about food through her celiac diagnosis, and continues to make eating healthfully a priority.

Beyond health, a diagnosis offers the chance to meet many new people and develop meaningful friendships. Often, these friendships begin with a desire to find others who understand the gluten-free diet.

Erin Smith received a celiac diagnosis as a toddler in the early 1980s, when much less was known about celiac disease and far fewer gluten-free options were available. The challenges Smith faced have helped shape her life.

“Growing up with celiac and being a kid with celiac is hard but, in the pre-internet era where there was no communications other than your parents or your doctor, I found it really difficult,” Smith explains. Not until her teen years did she find a support group and have the opportunity to meet others with celiac. These early experiences played an important role after she graduated from college. “My whole kind of motive as an adult was to build a community that I didn’t have as a kid,” she explains.

To that end, Smith has focused on community building. First she got involved with the New York City Celiac Disease Meetup Group. “I wanted to socialize in Manhattan, and I wanted to drink and go out with people my age that knew what I was talking about,” she says. “And so I started going to these meetup events on a regular basis, and it was never a pity party. It was always like, ‘We are socializing and we also happen to eat gluten free.’ So that was really important for me.”

When she took over running the group, she found she received as much as she gave. “With the meetup group, you know, as much as I put into it, I got a lot out of it. I met a lot of really awesome people…that have become really good friends.” This experience solidified her desire to be an advocate within the community, and she sought out additional opportunities to inspire others through her own gluten-free experiences.

In 2007, she launched her website, GlutenFreeFun.blogspot.com, where she wrote about her gluten-free experiences and gained a large following. “I called it Gluten-Free Fun because, you know, I always just knew living life as someone with celiac who is gluten free, and I didn’t know any other way of life.” Smith never let celiac stop her, and she did not want anyone to feel left out because “there are still many things you can eat and places you can go” on the gluten-free diet. Always a proponent of gluten-free travel, she found a dearth of information on the topic.

In 2011, she launched a second site, GlutenFreeGlobetrotter.com, devoted to all things gluten-free travel. The site “shares tips of how to travel around the whole world and be gluten free.” It focuses on “cities that are more gluten-free friendly, ways to put together an itinerary so you’re not scrambling at the last minute to find places to eat” and other important details. As with everything Smith does, she is connecting with a whole new group of people through the site and expanding both her own personal community and the much larger gluten-free one.

Like Smith, Craig Pinto’s celiac diagnosis led him to pursue opportunities that have allowed him to focus on meeting new people. “I think it caused an extremely positive shift,” says Pinto of his diagnosis in 2000. He feels strongly that “just meeting the people [in the gluten-free community] along the way was a great outcome” of his diagnosis.

Pinto’s celiac diagnosis also allowed him to return to football, where for several years he was the field goal kicker for the New Jersey Revolution indoor/arena football team. “I was able to play sports again, and in playing sports I was able to meet new people,” he explains.

When traveling with the team, he often received questions about why he ate differently. “Ultimately,” he explains of his team travels, “they all ended up being good chances to educate” his teammates and anyone he met about celiac disease and the gluten-free diet.

Between making inroads in the community and through football, Pinto found that he enjoyed reaching out to other people and focusing on education. This ended up significantly affecting his life, when he started wondering “how can I make this into something that I can work at every day?”

Pinto became interested in making a difference through the nonprofit world, where he currently spends a great deal of his time both professionally and personally. He served as president of the National Celiac Disease Society, a nonprofit formerly known as the Kicking 4 Celiac Foundation that focuses on raising celiac awareness. Through the organization, he worked on community programming and also helped provide high school seniors with scholarships to help them defer the costs of the gluten-free diet.

When it comes to looking at the additions to one’s life following a diagnosis, De Cicco-Butz says, “I like to say that my life started again when I was handed my diagnosis. Being able to hit the reset button was something that I am truly thankful for, because I finally was able to experience a new normal, and being normal has, quite literally, never felt so good.”

Want to learn more about celiac and following a gluten-free diet? Read “What is Celiac Disease?” and “The Basic Gluten-Free Diet.”