Claire Jansson-Knodell, MD, entered gastroenterology partly because it was a male-dominated profession. She wanted to change that. Then, during her medical residency, she researched another kind of gender discrimination—by a disease.

Celiac, like other autoimmune diseases, affects women more than men. As high as 70 percent of American patients are female. The rate of undiagnosed celiac is also higher among women.

Jansson-Knodell was the lead author of several studies from Mayo Clinic in Rochester, Minnesota, investigating how celiac affects the sexes. Using medical records and patient blood samples, she studied the gender gap in both undiagnosed and diagnosed celiac in Olmstead County, Minnesota. Local findings prompted a systematic review and meta-analysis of all medical research that detected rates of celiac in undiagnosed populations.

Among the patients referred to the celiac center, 71 percent of cases were women. In the studies of diagnosed and undiagnosed celiac in Olmstead County, the figures were 65 and 62 percent female, respectively.

“What struck me doing these research studies is that the trend persists across the different populations,” said Jansson-Knodell of the high rate of cases in women.

In the meta-analysis, 59 percent of people with undiagnosed celiac were women. The disparity appeared in data from every continent and consistently between individual studies. The overall risk for undiagnosed celiac is small: slightly under half a percent for men and slightly over half a percent for women. In comparison, however, a woman is 42 percent more likely to have undetected celiac disease.

“Overall, I think this is an important study which shows the incredibly high rate of undiagnosed celiac disease. The numbers the authors suggest is astonishing,” said Maureen Leonard, MD, clinical director of the Center for Celiac Research and Treatment, Massachusetts General Hospital for Children in Boston.

The study estimates there are 965,960 American women with undiagnosed and untreated celiac. Worldwide, the number is approximately 21.7 million. For men, the figures are 659,850 in the United States and 15.5 million worldwide.

Medical research often draws data from university hospitals. The patients who attend these centers are relatively self-motivated and can afford specialist care, possibly skewing the data. Experts call this referral bias. The Olmstead County studies took another perspective by drawing data from the community around Rochester. It found the rate of undiagnosed celiac in waste or extra blood from routine lab samples patients consented to provide for study.

Still, the findings reflect a particular community. One noted weakness is that nearly all participants were non-Hispanic whites. Other studies have consistently found the highest prevalence of celiac among white Americans.

Meta-analysis is another way to compensate for weak data such as small study size by pooling results. In the systematic review, Jansson-Knodell and colleagues narrowed 4,070 articles down to 87 that met their criteria for relevance and accuracy.

The findings have important implications for public health. The county studies found significantly higher rates of related health problems that affect women disproportionately. Among adult women with undiagnosed celiac, the prevalence of depression was 29 percent compared to a national rate of 6.7 percent. Among women over 50 with diagnosed celiac, the prevalence of osteoporosis was 35 percent compared to 16 percent nationally.

Notably, celiac also increased the rates of depression and osteoporosis among men. Most surprisingly, women and men with undiagnosed celiac had the same risk for other autoimmune diseases, 31.6 percent, though these are normally more common in women.

The reason why celiac affects more women remains unknown. A 2018 study from another team at Mayo Clinic identified differences in intestinal permeability and microbial diversity between healthy men and women. However, no research yet has connected these factors to the gender imbalance in celiac.

Potential explanations might involve environmental factors, hormones and genetics, said Jansson-Knodell: “When we wrote our first version of the systematic review and meta-analysis, we had a long discussion section about all these potential explanations for why is there this gender difference. At the end of the day, we cut out a lot of that because we simply don’t know. It was all theories. The research isn’t there yet to back up why we might see these differences.”

Leonard said, “I agree with the authors that more research into gender differences is appropriate, especially given the possibility that alternative therapies for patients with celiac disease are in the pipeline. When these therapies are successfully developed, it will be extremely important to understand these differences.”

With undiagnosed celiac so common, it is incumbent upon patients and doctors to look out for it.

Jansson-Knodell said, “I think the bottom line is to get tested, to seek medical care. If you’re having symptoms, if you’re iron deficient, if you have a family member with celiac disease, are a Type 1 diabetic or have some other risk factor, it’s important to seek medical care and to look into having your primary care doctor or your gastroenterologist consider doing some serology testing and then possibly a biopsy to confirm diagnosis.”

To emphasize the importance of pursuing a diagnosis while on a normal, gluten-containing diet, she tells of a good friend from medical school whose mother has celiac.

“My friend sees her primary care doctor once a year. Before going in for that visit, she makes sure she’s getting adequate gluten in her diet so that her testing will be accurate. She’s eating a piece of bread a day at least for the month prior to her visit. When she told me this, I was like, ‘Good for you! Staying on top of things and giving it a good shot for accurate testing.’”

After diagnosis with celiac, women should look after the key areas of bone health and mental health, said Jansson-Knodell.

Leonard said, “While more research is needed, the presentation for men and women with celiac disease and the treatment is exactly the same: a strict gluten-free diet. Women with celiac who are of child-bearing age should ensure that they are obtaining enough folic acid from their diet or a supplement to prevent neural tube defects in pregnancy. Gluten-free grains are not fortified with folic acid like their gluten-containing counterparts, so this is very important. Along the same lines, patients with unexplained infertility should talk with their doctor about getting tested for celiac disease.”

The gender divide in gastroenterology 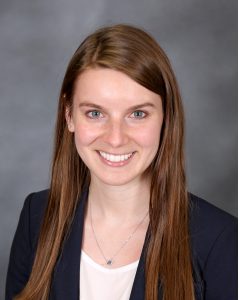 We asked Claire Jansson-Knodell, MD, about her career goal to improve patient care for women in gastroenterology.

GFL: When and why did you decide to pursue a career in medicine?

CJK: In high school. I had a wonderful pediatrician growing up. I idolized him, and he provided excellent care for my sister, my brother and me.

I had rotavirus when I was a toddler before there was a vaccine. My pediatrician asked his nurse to drive my mom along with me to children’s hospital so I could be given IV fluids and supportive care right away.

Children in the developing world still have a high mortality rate related to rotavirus because the diarrhea can be so dehydrating. [My pediatrician] once told me that his gift in medicine as a pediatrician was to tell the difference between a sick kid and a not-sick kid. Because he knew I was a sick kid in his office, I was able to recover and have a healthy childhood. That practically made him a part of the family.

He helped me celebrate my high school graduation and my medical school graduation, where he joked that perhaps we could have a role reversal; I would love nothing more than to be able to care for him someday.

GFL: What drew you to study gender-based differences in celiac disease?

CJK: The interest in gender-based differences comes from a couple different angles. One is that I joined a male-dominated profession: 16.4 percent of practicing gastroenterologists in the United States are women. I was drawn to GI for that reason.

Within celiac disease, there’s this gender discrepancy within a population of people that we’re caring for. One of my goals was to provide excellent care for patients in general and in particular women with digestive issues.

Theoretically, half of the population is women. Many women prefer a female doctor. Given the male-to-female ratio of gastroenterologists right now, this isn’t always possible for our patients.

Sometimes in GI, we talk about sensitive issues such as bowel movements, patterns and habits. I want patients to feel as comfortable as possible because for most people this is not a typical topic of conversation. I can understand why some patients may prefer a doctor of the same sex, and one of many reasons why I chose GI was to help fill that gap in patient needs.

On a personal level, I would like to drive forward research in women’s health. Much of [the] research in the past, including in animal models, was done on males. This over-reliance on male cells and animals does not give us a clear understanding of sex differences in health and outcomes. Women used to be excluded from clinical trials, but the National Institutes of Health has changed that.

We need more female researchers, scientists and physicians to continue to make important contributions to their fields.

GFL: In writing for Gluten-Free Living, it seems women are equally represented among the top experts on celiac I’ve interviewed. Do you think celiac research attracts women because the disease seems biased toward them?

CJK: I am not sure. I am glad there are wonderful top experts in celiac disease who are women.  Personally, I had two male mentors in the field of celiac disease: Alberto Rubio-Tapia, MD, and Joseph Murray, MD.

You will also note that for the American College of Gastroenterology guidelines on the diagnosis and management of celiac disease, four of the five authors are men. This is one of the key references gastroenterologists use when diagnosing and caring for individuals with celiac disease.

There are a growing number of female gastroenterologists. What is exciting right now is that all four major GI societies in the United States have female presidents.

Van Waffle is a freelance journalist based in Waterloo, Canada, and research editor for Gluten-Free Living. He blogs at vanwaffle.com.

What’s Gluten-Free at Trader Joe’s? Here’s 19 of Our Favorites
Share This