What exactly is thyroid disease? 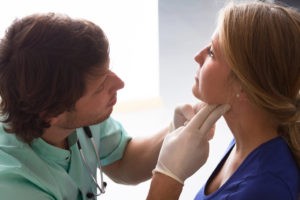 The butterfly-shaped thyroid gland is located in the lower portion of the neck. In addition to maintaining metabolism, the thyroid regulates other hormones and keeps organs functioning properly. This tiny gland is responsible for a large portion of the body. In someone with celiac disease, white blood cells will attack the small intestine lining; however, with an autoimmune thyroid disorder, the white blood cells mistake the thyroid gland as a foreign invader and attack the gland. An autoimmune thyroid disorder is typically the culprit for an underactive thyroid, known as Hashimoto’s disease, or an overactive thyroid, caused by Grave’s disease. Thyroid disease can appear at any age. Some women develop postpartum thyroiditis, which affects approximately 10 percent of women after giving birth. The main cause for thyroid disease is still unknown; however, some researchers believe it can be hereditary, come from an alternative autoimmune disorder or even be triggered by a traumatic event.

According to Amy Myers, M.D., founder of the Austin UltraHealth medical clinic in Austin, Texas, thyroid conditions start in the gut. She believes thyroid disease can develop from a leaky gut, which occurs when your small intestine becomes too penetrable and allows liquids and particles to flow through your bloodstream from your digestive tract.  In fact, Myers finds that gluten tends to be one of the primary causes of leaky gut in her patients with gluten sensitivity or celiac disease.

When someone who has gluten sensitivity or celiac disease eats gluten, the proteins from the gluten will go through the stomach, into the small intestine and force the body to produce a chemical called zonulin, which opens up the intestinal walls, allowing particles and liquids to flow. When this happens, over time the body becomes chronically inflamed, leaving one susceptible to developing an autoimmune disorder, such as thyroid disease and other serious conditions.

Positive impacts of a gluten-free diet

Although several thyroid symptoms could be misinterpreted for another condition or triggered solely by celiac disease, it’s best to know potential signs of trouble:

If you notice several of these symptoms, it’s worth visiting your physician for a blood test. If you are convinced that your symptoms are not being caused by celiac disease, you must be your own advocate when it comes to asking for blood tests and having your thyroid tested. Some helpful blood tests include TSH, free T3, reverse T3, free T4, thyroid antibodies, vitamin levels, cortisol level and iron level.