A potential celiac disease vaccine is being developed and is currently in phase two of its trial, so Gluten-Free Living spoke with Kelly Carter, one of the trial participants, about her experience in the trial over the past several months.

The vaccine, Nexvax2, is being developed by ImmusanT and is the only disease-modifying approach for celiac in clinical development right now. The vaccine is designed to reprogram the T cells that are trigged by a person’s immune response to gluten. Nexvax2 aims to restore immune tolerance to gluten, reduce inflammation in the small intestine and ultimately, allow those with celiac disease to resume eating a diet with gluten in it.

“Inadvertent gluten exposures can cause significant and long-term negative impacts on patient health,” said Leslie Williams, chief executive officer of ImmusanT. “At ImmusanT, we are deeply committed to advancing Nexvax2 to protect celiac patients from the effects of inevitable gluten exposure.”

Phase one of the trial was considered successful, as the vaccine was shown to be safe and well-tolerated, even when given at its highest doses. Phase two’s goal is to confirm the effectiveness of the vaccine and broaden ImmusanT’s understanding of the impact of immunotherapies.

The vaccine is not a preventative vaccine (designed to prevent disease), but a therapeutic vaccine, which treats disease already present. According to Beyond Celiac, “They target an immune response that is already occurring in the body. In celiac disease, the vaccines being developed target the immune response triggered by gluten. Therapeutic vaccines aim to reprogram the immune system to learn not to react.”

Phase two of this trial enrolled 150 patients in the U.S., New Zealand and Australia, including Kelly Carter of the Fat Celiac blog.

The vaccination, which is given subcutaneously, is given in small doses at first, then gradually increased so the body builds a resistance to the gluten protein over several months.

Carter had a 50 percent chance of getting the medicine in the trial, but there was also a chance of receiving a placebo. To participate in the trial, Carter was required to do an initial gluten challenge to see her body’s natural reaction to gluten, which she said was “very scary.”

After the gluten challenge, Carter started with small doses of the vaccine for six weeks so her body could acclimate to the medicine, then she gave herself subcutaneous injections in the abdomen twice a week for 10 weeks.

Then, there are three food challenges. Carter had to drink shakes, one with gluten, one without, and one that could go either way.

“This is the final exam of the finalest exam of your life,” Carter said. She felt fine after one food challenge and was sick for two days after the other.

If the vaccine is approved, Carter will receive it free of charge since she participated in the trial. 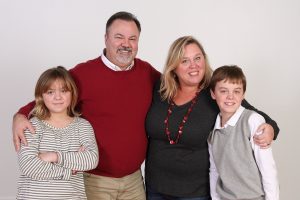 Carter lives in Atlanta, Georgia and blogs at Fat Celiac. She was diagnosed with celiac disease in 2013. She started the blog to talk about the trial and chronicle her experiences. “A lot of people heard about the vaccine trial and wanted nothing to do with it,” Carter said. “I said, why not? There’s no reason in the world not to do it.”

For those with celiac disease, Carter believes, “the gluten-free diet is not sufficient. It’s virtually impossible.” Therefore, she started the blog to inform readers of other options and her truthful, factual experience with the trial. She has hope in the vaccination because “there are lots of people who want to heal their bodies but don’t want to be reclusive and live the way you would have to live to be 100 percent gluten free all the time.”

About the trial experience

Carter travelled from Atlanta, Georgia to Nashville, Tennessee for the trial. The reason she believed it was worth it: “I’m hopeful that this is a cure,” she said.

The trial has had its ups and downs, particularly after the second food challenge, which caused her to throw up and feel sick. Carter said she has no idea whether she is receiving the medicine or the placebo and she won’t know until the trial’s results are published.

But either way, as she comes to the end of the trial, she’s glad she participated. “It’s been interesting and exciting to be a part of it,” she said. “Why would somebody not want to be a part of trying something new? Yes, there are definitely some risks. But at the same time, my life was bad. I was sick before I did this trial. I was sick all the time…things weren’t good. So if I’ve got a way to make my body work better, I’m going to take that chance.”

Even though she sticks to a gluten-free diet, Carter said she still feels sick much of the time.

She’s hopeful that the vaccine will be widely available soon, and she’s already daydreaming about what she will eat when it is— she can’t decide between Chinese food, fried chicken or “a good hamburger with a nice, soft, squishy bun.” Though she says she would say gluten free for the most part, Carter said the vaccine would “open up a different world” of freedom.

The months Carter has spent in the trial have overall left her feeling better than she has in years.

“I’ve been much kinder on my body than I normally am,” she said. “I’ve been more careful than I usually am on the gluten-free diet. My skin looks better and I feel better.”

Carter recently had an allergic reaction (to what, she isn’t sure) and her doctors decided to pull her from the trial when she was four doses away from finishing the study. She wrote on her blog:

I’m sorry I washed out. It is as disappointing to you as it is to me. I’ve taken a day to get through the mourning, anger, and second guessing. I’ve been on pins and needles for 10 days waiting for this decision – waiting, knowing the decision is beyond my control. I’ve begged and pleaded to stay in, but I cannot. Decisions have been made that cannot be unmade. It is.

The vaccine has received fast-track designated from the FDA, which is designed to speed up the development. Carter is hopeful her personal medical questions will be answered and that the vaccine will become widely available to those with celiac disease.

Dining Out? Some Gluten-Free Restaurant Food Isn’t
Share This