For those eating gluten free, the Mediterranean diet provides variety and great-tasting foods

The Mediterranean diet is considered perhaps the healthiest way to eat in the whole world. Inspired by research on the dietary patterns of those who lived in Greece and the southern part of Italy in the 1940s and 1950s, the Mediterranean diet is based on fruits, vegetables, whole grains, fish, beans and even small servings of red wine. This style of eating offers health benefits for almost every part of the body, including the heart and brain.

In this edition of Not Just Gluten Free, let’s take a culinary trip to learn about the nutritional benefits and flavors of these often naturally gluten-free foods, as well as practical suggestions for making your diet just a little more Mediterranean.

The path to the Pyramid

While the Mediterranean style of eating extends back much longer, the Mediterranean Pyramid (see below) is celebrating a milestone in 2018. Introduced in 1993 by Oldways, a nonprofit organization dedicated to promoting the Mediterranean diet as well as other traditional diets, the Pyramid was a result of a 1993 International Conference on the Diets of the Mediterranean. “Oldways brought together world-class nutrition scientists, public policy experts, food writers and chefs to counter the ‘fat phobia’ and provide an alternative to the USDA’s Food Guide Pyramid, first introduced in 1992,” notes Kelly Toups, registered dietitian and nutrition director at Oldways. “In the years since, the Pyramid has been updated to include new illustrations and reflect the wealth of nutrition science that supports it.”

Oldways developed the Pyramid to help consumers understand the total diet at a glance, notes Toups. “The Mediterranean Diet Pyramid shows examples of what to eat over time, not just at one meal, and the relative proportion of each food group.” Toups stresses that the Mediterranean diet is about lifestyle change, not a short-term fix. “People can get a sense of the combination of all our meals over days or weeks, demonstrating a clear, long-term path to better health.” 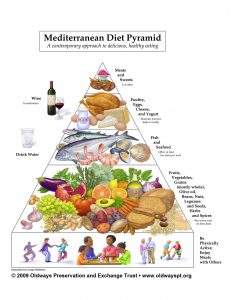 The Pyramid design allows for easy interpretation of the diet’s structure. “When deciding what to eat, consumers should make sure that foods at the base of the Pyramid, such as vegetables, fruits, beans and whole grains, are featured in every meal,” advises Toups. “Foods further up the pyramid, including traditional cheeses, seafood and poultry, are used in smaller portions. Foods at the very top of the Pyramid, such as red meat and sweets, are occasional foods and should not be part of the regular weekly diet.”

Click below to learn about the numerous health benefits of the Mediterranean diet.

What’s Gluten-Free at Trader Joe’s? Here’s 19 of Our Favorites
Share This