Heart disease is the No. 1 killer of both men and women in the U.S., responsible for one in every four deaths. In addition, about 735,000 people will suffer a heart attack every year, and nearly 800,000 people will have a stroke. Contributing factors to heart disease and stroke include high blood pressure and diabetes, which occur in one in three and one in 10 adults, respectively. What can you do to reduce your risk?

A 2014 study from the American College of Cardiology of nearly 24,000 people with celiac found a roughly twofold increase in heart disease compared to those without celiac. Researchers noted that systemic inflammation related to untreated celiac was the most likely culprit. Another 2017 review of studies found that those with celiac who were not on the gluten-free diet had increased risks of heart disease, stroke and death from a heart attack.

“Several studies have indicated that people with celiac disease have a higher risk for coronary artery disease and stroke when compared with the general population,” notes Trisha Lyons, RDN, LD, a dietitian who specializes in celiac treatment at the MetroHealth Medical Center in Cleveland, Ohio. “The vast majority of people with active celiac disease in the U.S. are believed to be underdiagnosed or misdiagnosed. These people may be experiencing a myriad of signs and symptoms, and are at risk for heart disease. Receiving a proper diagnosis is the first step in reducing that risk.”

However, research also notes that the gluten-free diet goes a long way in helping to reduce the chance of developing one of these conditions. “It is critically important for those people with celiac disease to follow the gluten-free diet carefully to maintain the gut integrity and prevent chronic inflammation,” says Lyons. “This gives them the best chance.”

Steps to a healthier heart

Even just a few years ago, dietary fat was public enemy No. 1 when it came to heart disease. Now we know that many nutritional factors likely play a role in developing the disease, including sugar, salt, fiber and type of fat. “While cholesterol-lowering medications might be necessary for some people, taking heart-healthy measures can assist in lowering blood lipid levels and may even result in lower doses of medication,” says Lyons. “Consume a heart-healthy diet the majority of the time, get regular exercise, consume alcohol in moderation and lose weight if you need to. Keep in mind that even small or modest weight loss can make a difference.” (See chart below for the heart health benefits derived from 5 to 10 percent weight loss.)

Lyons finds that many of her patients struggle to eat enough whole grains, which are likely protective against heart disease. A 2018 study found that men who ate whole grains had decreased levels of stiffness in the aorta, the main artery in the body. High levels of aortic stiffness are often predictive of heart disease and stroke. Other studies have linked whole grains to less inflammation in the body, weight loss, a reduction in diabetes and cancer, and increased longevity.

Perhaps the most significant benefit of whole grains is dietary fiber, which is often lacking in the gluten-free diet. “Fiber is beneficial to the body in many ways, including heart health, weight control, blood sugar control and reducing cholesterol levels,” notes Lyons. “But fiber is low in most processed gluten-free foods.” Lyons encourages her patients to seek out whole grain choices such as quinoa, certified gluten-free oats and brown rice. As always, any gluten-free grain that you purchase should be labeled gluten free.

Despite grains’ health benefits, some with celiac still shy away from them. Fortunately, fiber is found in other healthy foods, says Lyons. “Besides gluten-free whole grains, fiber can be found in nuts, seeds, flaxmeal, beans, peas, fruits, vegetables and foods made from them, such as hummus, lentil soup and trail mix. Also, I might suggest a multivitamin with minerals to make up for the nutrition not being acquired from grains.”

Choosing healthy sources of fat is also essential to heart health. Thankfully, harmful trans fats were banned in the U.S. in 2018, so partially hydrogenated oils that raise “bad” cholesterol (LDL) and lower “good” cholesterol (HDL) are no longer available. Choose healthy oils when cooking or baking, such as olive or canola oil. Limit butter and other animal-based saturated fats. Lyons also encourages her patients to look for foods rich in omega-3 fatty acids, such as walnuts, flaxmeal and salmon.

Reducing the amount of added sugar in the diet is also crucial to both cardiovascular health and weight control. Lyons notes that the significant increase in the variety of gluten-free products has not necessarily helped the heart health of her patients with celiac. “Gluten-free specialty goods frequently contain more fat and sugar than their wheat-based counterparts and should be consumed in moderation,” she advises. “Contrary to popular belief, gluten free does not always indicate the healthiest choice.” Keep added sugars, such as the ones found in gluten-free cakes, cookies and sugar-sweetened beverages, to a minimum.

Too much sodium in the diet can contribute to high blood pressure, which can put extra strain on the heart’s arteries. Start by reducing the amount of salt you add to foods, both when cooking and at the table. Consider removing the salt shaker from the table so you aren’t tempted to use it. However, added salt isn’t the end of the story—about 80 percent of the sodium in our diets comes from processed foods. Microwavable meals, canned soups, lunch meat, cheese, bacon, sausage, chips and other snack foods are all examples of foods that may be high in sodium. Try to keep your sodium intake to about 2,000 to 3,000 milligrams (mg) per day.

The gluten-free diet can often feel overwhelming, and choices may already feel limited. Lyons notes that availability of heart-healthy gluten-free foods can be an issue. “High-fiber, whole-grain, gluten-free specialty foods are not as readily available as highly processed, fiber-poor specialty foods,” she says. “And while gluten-free food options have increased exponentially during the last two decades, some stores still have a limited selection.” If you live in an area where grocery stores offer few choices, it may be a good idea to find whole-grain products online. Lyons also notes that higher prices for gluten-free foods can create a barrier. Consider shopping in bulk for whole grains (but do not buy from bulk bins because of cross-contamination concerns).

Healthy gluten-free foods may not be as convenient to prepare as some of their gluten-containing equivalents. “It is occasionally necessary to prepare gluten-free foods from scratch, where you might not have needed to do that before,” says Lyons. “People with limited cooking skills, time or access to a kitchen have additional challenges.” There are now commercially frozen gluten-free grains such as brown rice and quinoa that only require a microwave for preparation. Choose whole-grain, gluten-free crackers or popcorn for an easy snack and whole-grain bread and tortillas for sandwiches. These need no or minimal preparation.

Lyons also realizes that motivation can be an issue, especially when the diet already feels limited. “Some patients note that they feel significant loss when foods they’ve consumed their entire lives are suddenly off limits,” she says. “Some have little interest in nutrition, so figuring out what foods are safe and heart healthy can be a challenge, especially when eating outside of the home or traveling.”

Lyons provides additional words of encouragement when patients have other conditions that require a restricted diet, such as diabetes. “Having one major dietary restriction can be challenging at times,” she says, “but having to factor in additional restrictions can feel downright overwhelming, especially in the beginning.” She encourages her patients to take it one step at a time. “Numerous gluten-free foods and ingredients are suitable for most diets, including lean meats and fish, dairy, eggs, beans, nuts, gluten-free whole grains, fruits and vegetables,” she notes. “Get a good start by learning about each diet, be willing to plan meals, shop and spend some time in the kitchen.” Taking these suggestions to heart can set you up for a healthy 2019 and beyond!

A little bit can make a big difference

While getting down to your ideal body weight might seem like the ultimate accomplishment, as far as your health is concerned, losing even just 5 to 10 percent of your weight can lead to big gains in your health. 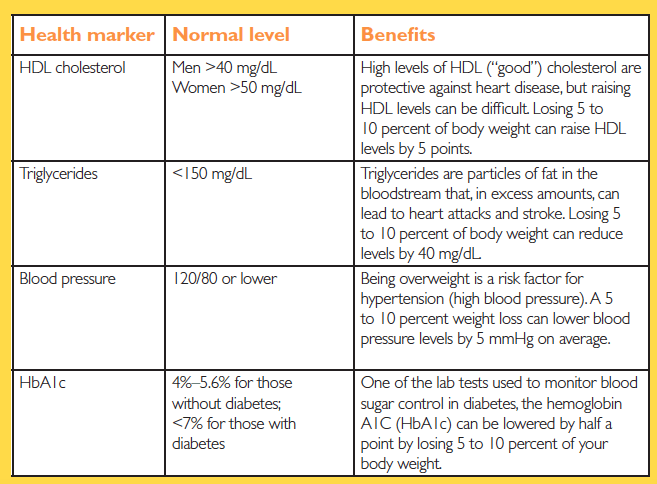 Other benefits of 5 to 10 percent weight loss