One nutrient of concern for vegetarians or vegans is vitamin B12, which helps produce red blood cells and only occurs naturally in animal products. B12 deficiency is of particular worry for those with celiac. The condition affects the villi of the small intestine, which impacts the absorption of this important vitamin. “Accidental or intentional dietary non-compliance can increase your risk of B12 deficiency,” notes Euler. “While it is a vitamin that is stored in your body, eventually those stores will get depleted.” Specific populations may be more at risk for deficiency, including older adults, who see a decrease in absorption due to age. Medications such as the diabetes drug Metformin may also affect B12 levels, particularly if it is taken for many years.

Vegetarians and vegans should seek out sources of vitamin B12, advises Euler. “Those who consume a vegan diet should regularly choose fortified foods such as soy milk and take a B12 supplement,” she advises. “While some vegans use nutritional yeast for its B12 content, it is not likely sufficient to meet all needs.” Euler advises her clients to have B12 levels checked regularly, about every one to two years.

In addition to B12 and protein, vegetarians and vegans
should ensure they are getting enough calcium and 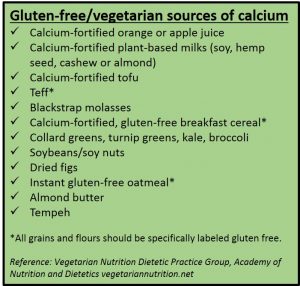 vitamin D, which build bone strength. This is
particularly important for those with celiac, who are already at risk for low bone density and osteoporosis, which can lead to fractures. “Vitamin D is a big concern since it only comes from animal products or fortified foods,” says Euler. “While we produce some vitamin D from sunshine, it’s not likely enough.” Euler notes that many Americans don’t get enough vitamin D in their diets and recommends regular testing and supplementation as needed.

Vegetarians and vegans will be able to find calcium in plant foods (see box at right), but it requires a well-planned diet, and additional help may be needed, says Euler. “Supplementation may be necessary, especially for those who may already be at risk
due to celiac disease,” she advises. Daily calcium recommendations for vegetarians and
vegans are the same as for those who eat meat: 1,000 milligrams (mg) per day for adults under 50,
and 1,200 mg/day for adults over 50.

Other nutrients that may be lacking in a vegetarian,
gluten-free diet include iron and omega-3 fatty acids. 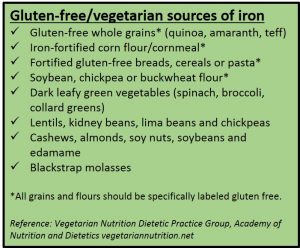 Iron deficiencies are common in those with newly
diagnosed celiac. Unlike their gluten-containing
counterparts, not all gluten-free bread and cereals
are enriched with iron (see sidebar at right for vegetarian and gluten-free sources of dietary iron). If dietary iron intake is low or if there is a documented deficiency, supplementation may be necessary. Eating foods high in vitamin C, such as citrus fruits, broccoli, tomatoes and strawberries, may help enhance iron absorption at meals.

Sources of heart-healthy omega-3 fatty acids include alpha-linolenic acid (ALA), eicosapentaenoic acid (EPA) and docosahexaenoic acid (DHA). ALA is found in plant foods such as ground flaxseed, chia seed, soybean oil, canola oil and walnuts. EPA and DHA can only be found in animal foods, including salmon, sardines
and mackerel. Because the body can convert some ALA
in the diet to EPA and DHA, Euler says, “I use hemp or
chia in smoothies, and then alternate
canola or olive oil when cooking.”

Defeat Deficiency: What Nutrients are Lacking in the Gluten-Free Diet?
Share This