On a snowy winter morning, I arrived at Pierre Elliott Trudeau Airport in Montreal ready to explore Quebec province, namely the city of Laval and the Eastern Townships. At first, I felt hesitant, because when I thought of French cuisine, I imagined sauce-heavy dishes that were often filled with flour and gluten. Additionally, on recent trips to the city of Montreal, I struggled to find appropriate things to eat and found myself opting for cheese on top of more cheese, just to be safe.

I vowed not to have that experience this time around—I was on the hunt for gluten-free and health-conscious food that would nourish my body and fuel my soul.

Within just 24 hours of exploring the region, I was pleasantly surprised by how progressive the area had become, catering wholeheartedly to the gluten-free, vegetarian and vegan communities while promoting organic and local cuisine simultaneously. 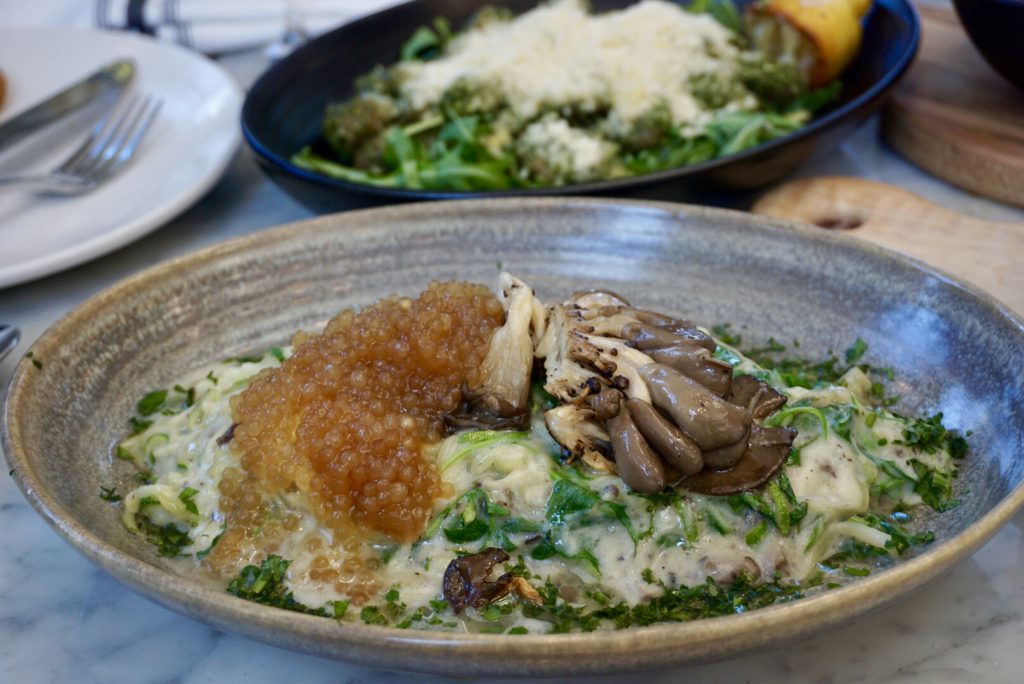 Laval Has It All

Laval, which arguably is the “New Jersey” of Quebec (with neighboring Montreal just across city limits) is coming up in the world, with impressive culinary options and tourist attractions. We decide to stay for a few nights in the city center at the Hilton Montreal/Laval that catered to those with gluten-free dietary requirements for breakfast, lunch and dinner. The hotel is centrally located next to the great shopping destination known as CF Carrefour Laval as well as a host of established up-and-coming restaurants.

Our very first stop to eat after arriving from the airport was at L’Antre-Nous, a creperie and bistro located within an outlet shopping mall. We weren’t fooled by the surroundings because once inside the restaurant, its quaint and cozy warmness coupled with the intoxicating aromas coming from the open kitchen signaled to me quite quickly that I was indeed in the right place.

The family-owned and operated restaurant moved from a smaller space to its current one so that it could expand seating capacity and be able to serve a larger crowd. The menu centers around its French crepe offerings—many that are gluten-free and made with buckwheat flour.

The waitress walked me through the gluten-free options and even suggested her favorites. I settled on the buckwheat crepe filled with smoked salmon and goat cheese and topped with grilled asparagus and fresh greens.

Another great dining destination that’s only a short distance from Hilton Laval is the incredible vegan/vegetarian dining experience at LOV. This eco-committed restaurant practices what it preaches and is committed to the environment and its customers’ health and wellbeing, which is evident in everything from the décor to the menu to the wine list. The must-try dishes here include avocado toast with poached egg; house gnocchi made of sweet potato; kimchi fries; and the chili lupeh (made with soy-free tempeh).

Chateau Taillefer-Lafon’s winery and event destination complements the food scene quite nicely—with some of its iced cider and ice wine found on local menus.

For an exceptional, fine-dining, all-out culinary splurge meal, reserve a table at Le Mitoyen, which offers an elegant, superbly executed multi-course tasting menu that can cater to a variety of food intolerances. On my recent visit, the entire menu was created gluten free. We dined on dishes like scallops, smoked ham, tender venison, tuna with citrus segments and many more. Guests may also appreciate the ambiance as much as they do the food, particularly if you’re seated right next to the wood burning fire.

When we determined we had indeed had enough to eat, we wanted to do something adventurous during our time in Laval. So we checked out the sporting complex in the area that was home to SkyVenture Montreal. For a few hours, we experienced an ultimate adrenaline rush as we went up several times in a recirculating indoor free fall simulator. Pro tips: Listen to the instructor, stay calm and enjoy the flight. 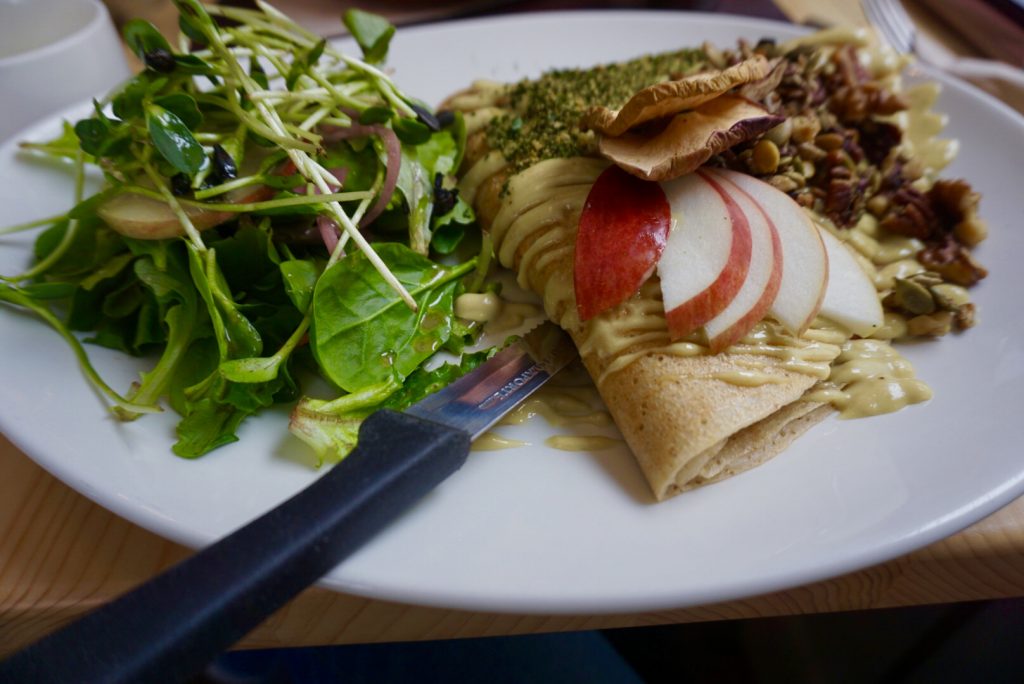 While more remote, the Eastern Townships are a must-see if you visit Quebec. The moniker Eastern Townships is given to the region within the Quebec province situated between the former seigneuries south of the Saint Lawrence River and the border of the United States.

The area overflows with restaurants, wineries and micro-breweries and is complemented by a host of outdoor activities for both the summer and the winter. One such notable restaurant is Gaia—a quaint local eatery inside of an old, rustic house. This vegan-, vegetarian- and gluten-free friendly restaurant has something for everyone. It has a fantastic juice, coffee and tea bar located at the entrance, coupled with a delicious array of food options for those who want to enjoy a leisurely meal inside during the colder months of the year.

The menu showcases a slew of hearty gluten-free crepes and specialty items like the vegan mac and chili, which was surprisingly decadent and satisfying. I paired my meal with a velvety green tea that took several minutes to steep, which made the meal all the more enjoyable when I took my first sip–it was well worth the wait.

For the traveling oenophiles, the area has an incredible wine region where guests can do a “circuit tour” that allows them to see several vineyards in the region. One that is a must-visit on the list is Leon Courville winery, which is set back on a hill with a breathtaking visit of the land and the vineyards. Due to its unique micro-climate, the winery produces some exceptional red and white varietals that it believes are the true reflection of the quality of its soil found in the region. Leon, the owner, is extremely meticulous about how he cultivates his vineyard and doesn’t mind at all taking the time to get things right. His ultimate mantra is patience, and he continues to have it while producing his sustainable wine. 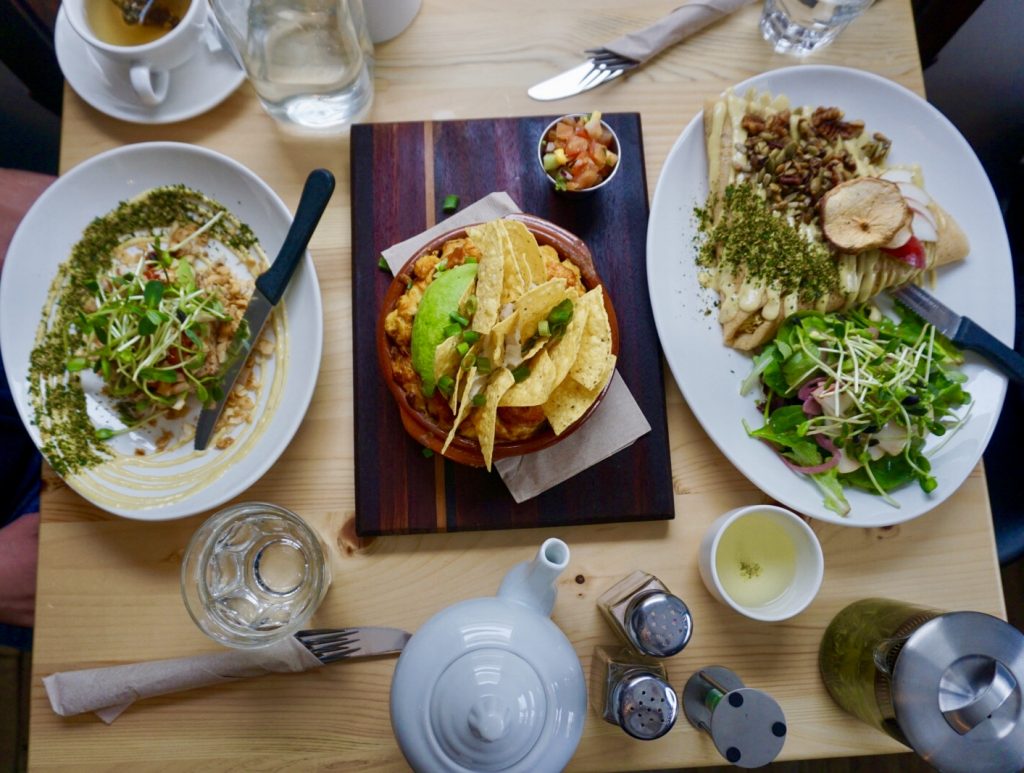 For the health-conscious traveler who wants an immersive vacation filled with exercise classes, spa treatments, healthy dinners and curated wine lists, look no further than Spa Eastman. The spa has a rich 40-year history.

Once a vegan culinary experience, the restaurant has since adapted to offer local, sustainable meats, fish and poultry but continues to abide by an anti-inflammatory style of cooking.

The food created here is completely gluten-free, including an incredible homemade baguette served at dinnertime, as well as dairy-free (unless otherwise specified) and mostly organic. The key to its cuisine is the low cooking temperature of 185° F, also known as Tonique Cuisine, a term it has coined.

“I wanted to create meals that make people feel great. We sous vide our cuisine so that it doesn’t release any toxins,” said owner Jocelyn Dubuc. “Our food is without GMO, pesticides, and it is near to nature.”

Unlike her other competitors in the health and wellness space, she does also offer organic and biological wine. Dubuc believes that wine is part of the art of living.

Chef nutritherapeute Jean-Marc Enderlin is at the helm of the kitchen creating unique dishes.  Guests at Spa Eastman can indulge in meals like cobia fillet with red curry, coriander seed, fennel seed, coconut cream, zucchini, jade rice and spirulina tian. The chef rotates the roster of dishes he cooks three to four times per year and curates his menus around seasonality. For both lunch and dinner, the spa offers a soup and salad bar packed with vegetables, nuts, seeds and raw oils.

The chef believes in the cuisine the kitchen produces. Having cooked all over the world, from France to Switzerland to Greece and South Africa, he’s realized that it comes down to how people feel. This is in direct correlation to what they put in their bodies. “We have a different style of cooking here. We are able to blend the colors and the flavors,” he explained.

You don’t have to stay overnight at the spa to enjoy a meal or two at Spa Eastman. There are a variety of day packages where you can mix and match spa treatments and meals throughout your day. For either lunch or dinner, I suggest taking full advantage of the restaurant’s delectable salad bar and its soup of the day offering. In between meals, the spa offers a variety of workout classes—everything from yoga to meditation, along with access to a full gym and hiking trails that showcase the ethereal beauty of the Eastern Townships. Not to be missed is the spa’s own “Eastman-les-Bains,” which has a variety of thermal spas, pools and saunas at your disposal throughout your stay.

All throughout my stay at Spa Eastman, I often wondered, could this experience get any better? It wasn’t just the exquisite cuisine or the ultimate pampering in the spa but the overall sense of calmness that washed over me from the moment I stepped foot into the building itself.

The richness of Canada’s gluten-free culinary options were present not only in Spa Eastman but in and around the Eastern Townships and throughout the intriguing city of Laval—everything from gluten-free crepes to elevated vegan fare to fine-dining tasting menus at Le Mitoyen. Whatever you’re searching for while traveling, a gluten-free version is awaiting you in Quebec. You just need to know where exactly to look for it.

Should Your Beauty Products Be Gluten Free?
Share This