In old Las Vegas — and up until about a generation ago — casino gambling was the bedrock of the economy and the essence of the city’s identity. Other sectors within the casino-resort sphere, including dining and entertainment, merely existed to serve the gaming market — and they weren’t even expected to turn a profit. In fact, they were money-losers, which was OK as long as the house kept winning in the casino. In recent years, however, that calculus has changed. As gaming profits slowly declined, income from dining, entertainment, spa services, nightclubs and shopping began filling out the revenue pie. And as Las Vegas became a culinary mecca, with the world’s top chefs setting up shop, foodies flocked to feast on extravagant cuisine unequaled in any other resort destination, fulfilling the “if you build it, they will come” mantra. Luckily for us, special diet accommodation has become de rigueur, making the experience that much more delicious. Thus, here are my current picks for the 10 best gluten-free bites in Las Vegas (in no particular order). 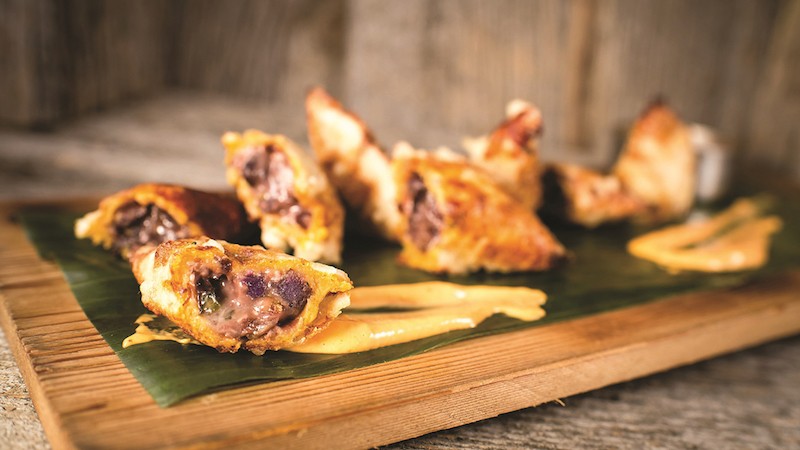 When discussing the rental car industry, road warriors often say that “there’s everybody else, then there’s Hertz.” A similar analogy could be applied to the realm of Mexican cuisine in Vegas, where one name stands above all the rest: Border Grill. The outlet’s “Too Hot Tamales,” TV celebrity chefs and culinary superstars Susan Feniger and Mary Sue Milliken, have spent years honing their modern Mexican cuisine to near perfection, and it shows. Most menu items are naturally gluten free at Border Grill, and while I’ve eaten my way through many of the menu’s best dishes, the chefs’ Plantain Empanadas are my favorite. Featuring organic black beans, poblano chiles and Mexican cheeses all wrapped inside a sweet, roasted plantain pastry, then finished with crema and chipotle salsa, these luscious empanadas will spoil you. 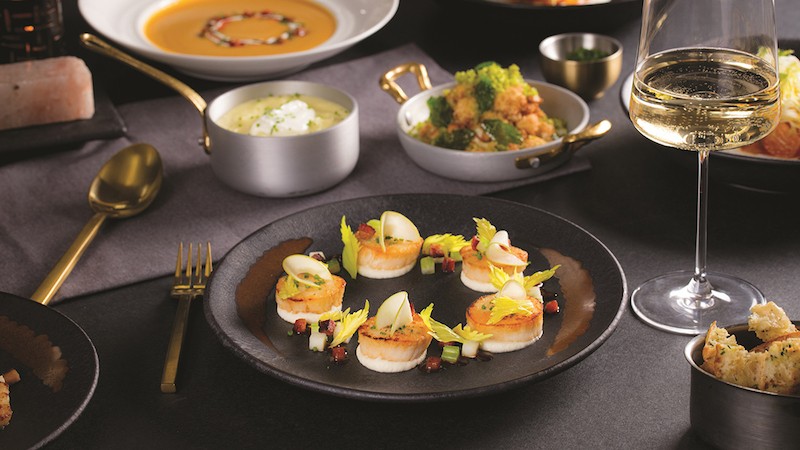 When the “shouty chef” opened his fifth Las Vegas restaurant (yes, five), even his outsized ego couldn’t have imagined the runaway success that Gordon Ramsay HELL’S KITCHEN at Caesars Palace would become. Since opening about a year ago, the eatery has arguably been the hottest table (pun intended) in town, with reservations difficult to book even during off-times. Guests walk into a room resembling the set of the eponymous TV show, with a somewhat eerie, holographic version of Ramsay just inside the door. Once seated, they’re treated to some of the chef’s greatest hits, including his signature Beef Wellington and Sticky Toffee Pudding. But a lesser-known specialty, created expressly for this restaurant, is a winner, too. The Pan-Seared Scallops with Celery Root, Braised Bacon Lardons & Apples is not only the perfect starter but also a relatively complex, gluten-free dish that impresses even jaded foodies.

When Hong Kong’s Lai Sun Group picked Las Vegas for its Western Hemisphere debut in 2018, local foodies salivated in anticipation of the renowned cooking that has earned coveted Michelin stars. Thankfully, the dining experience lives up to those lofty expectations, while the elegant dining room matches the impressive culinary presentations. Among many specialties, including an excellent dim sum selection, the Two-Course Beijing Roasted Duck dinner is the standout (not pictured). First, a Hong Kong-trained chef presents the duck tableside, carefully carving off the authentically crispy skin, which gluten-free diners enjoy with plum sauce, scallions and cucumber. The bird is then brought back to the kitchen, where the moist duck meat is removed and turned into a second delicious dish before being returned to the table. Although several options are available for this second course, I prefer the sautéed, diced duck meat with yam and corn, served in lettuce cups. This epicurean experience will also confer bragging rights, as you’ll be talking about this two-course gourmet delicacy long after you return from Sin City. 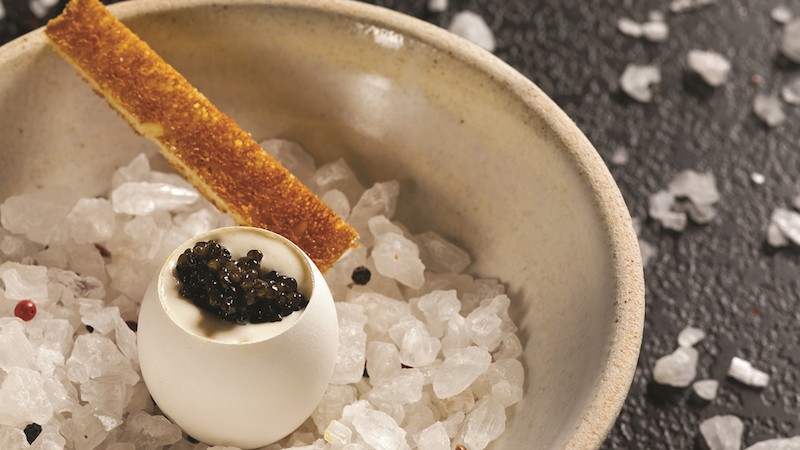 Modern-day gastropubs are known as much for their food as their drink, but talented executive chef Jamaal Taherzadeh has elevated the cuisine of his Libertine Social at Mandalay Bay far above other competitors in this category. In fact, the innovative dishes served here rival those of nearby fine dining establishments, and the chef’s Caviar Fried Egg starter, a perfect example of form, function and flavor, wowed me. To begin the complex preparation, the egg yolks are cooked sous vide then whipped with sea salt, while the whites are fried then pureed with cream and turned into a foam. After the corn is cooked to a pudding-like consistency, it’s deftly layered into an eggshell, along with the yolk, then covered with the egg white foam. Topped off with a generous helping of caviar, the dish makes a gorgeous presentation. Just ask the server to leave off the brioche toast garnish, then dig deep with a spoon to capture all the complex flavors in every delicious bite. 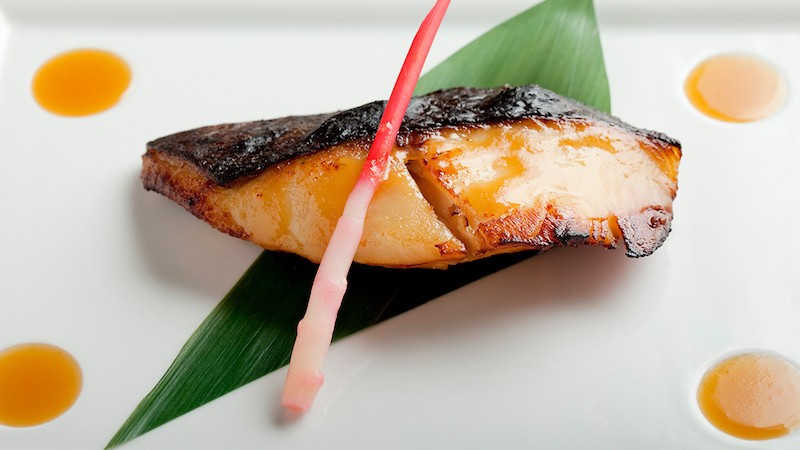 Very few celebrities have the distinction of being known by one name (think Cher,
Beyoncé, Celine), but Nobu Matsuhisa, the Japanese master chef behind this restaurant empire, is simply referred to as Nobu. And although the chef’s modern Japanese cuisine, sashimi and sushi are innovative and upscale, the most popular dish in the public’s mindset is likely his iconic Black Cod Miso. The signature dish is often imitated but never duplicated, since its silky, smooth texture and taste are world-class. In fact, the expression “melts in your mouth” applies perfectly here, as the delicate fish, marinated in Den Miso sauce, is a gourmet indulgence. As an added treat — and if your wallet can support it — be sure to try another Nobu delicacy: a few slices of Japanese A5 Wagyu beef that will bring your taste buds to another level. 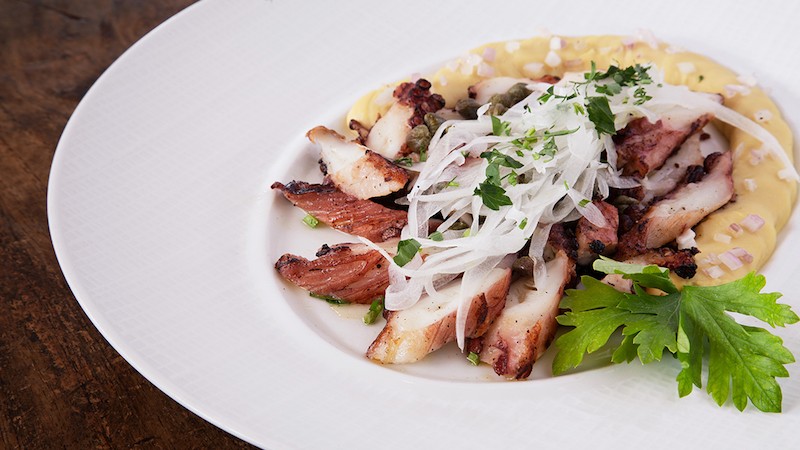 As the only fine-dining Greek restaurant on the Las Vegas Strip, Estiatorio Milos has long been the standard-bearer for Hellenic cuisine in Sin City. And while the options on the menu are all very good, the Grilled Octopus appetizer ultimately steals the thunder. Exemplifying what may be the trendiest dish of 2018, grilled octopus is now found up and down the Strip at top dining venues, but its preparation and presentation at Milos beats all. Here, the sashimi-quality Mediterranean octopus is char-grilled, then broiled and served over Santorini fava puree. Order it with a glass of Greek white wine, then close your eyes and be transported to Mykonos.

7. Radicchio and Pear Risotto, Mercato della Pescheria at The Venetian

It’s only natural that the Italian-themed Venetian Las Vegas would host a wealth of quality Italian restaurants. But it’s relative newcomer Mercato della Pescheria that impressed me most with an innovative and mouthwatering gluten-free dish. The Radicchio and Pear Risotto, a flavorful combination that blends sweet pears and braised radicchio with the aged Acquerello rice that gives the dish its consistency, achieves pure harmony. Enjoy it while dining “al fresco” in the atmospheric St. Mark’s Square of the Grand Canal Shoppes, where it’s always 72 degrees at perpetual sunset. Adding a bit of “street-mosphere” to the experience are musical acts, living statues and copious mounds of gelato. 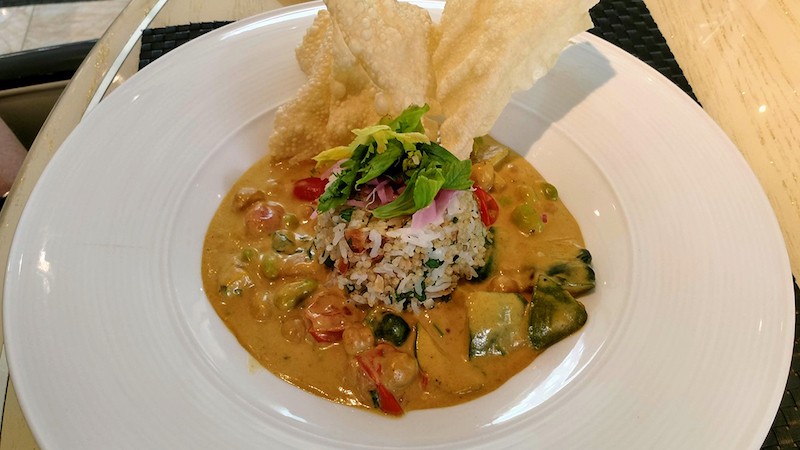 Best described as a warm, flavorful bowl of goodness, the vegan Chickpea Bowl at Jardin, inside Encore at Wynn Las Vegas, is also comfort food for the soul. Every restaurant inside the luxe Wynn and Encore properties features at least one vegan dish on their menu, and this relatively new offering is tops in my book. The bowl is actually a warm, thick stew consisting of lentils, edamame, toasted almonds, quinoa, pickled beets and citrus yogurt, bathed in a coconut curry sauce and topped with papadum (lentil and chickpea flour) chips. Enjoying this dish in the serene and gorgeous garden-like setting of Jardin, with a knowledgeable and doting service staff, is a rich experience unique to this resort.

9. Lemon Spaghetti, Giada at The Cromwell

When celebrity chef Giada De Laurentiis opened her namesake fine-dining restaurant in The Cromwell in 2016, she promised a California-Italian menu that emphasized fresh and light cuisine. Her motto — “Eat a little bit of everything, but not a lot of anything” — perfectly sums up the restaurant’s ethos with a mixture of small plates meant for sharing. But it’s one of her main dishes that stands out inside what is arguably the Strip’s most beautiful dining room. Giada’s Lemon Spaghetti, modified easily by substituting a gluten-free version of the namesake pasta, is a tour de force of luscious flavor and breathtaking presentation. Twirled tightly in a light lemon and mascarpone cheese sauce, the pasta is served over a pair of large, flavorful prawns, making this a don’t-miss dish to savor while gazing out at the Strip’s action through floor-to-ceiling windows. 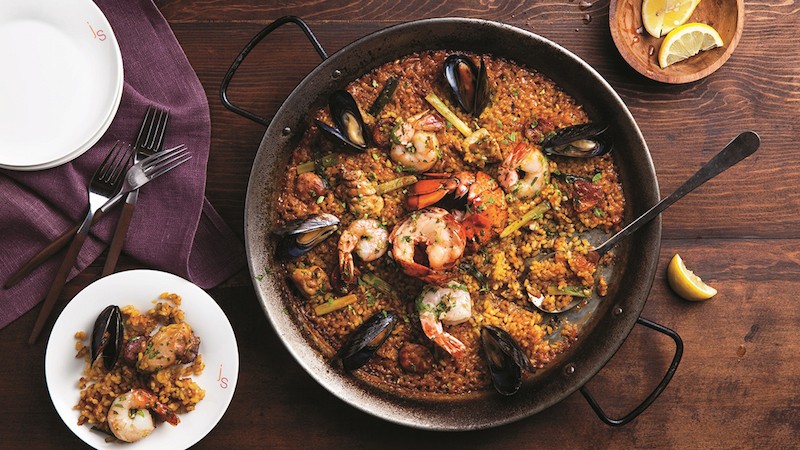 Considered by gourmands the quintessential Spanish dish, paella has become a virtual litmus test for Iberian restaurants’ authenticity. Its preparation is tricky, demanding the use of a short-grain rice that absorbs liquid, and thus doesn’t dry out in the shallow pan, so quality can vary widely and rarely achieves the level of perfection at Julian Serrano at Aria. The kitchen at the chef’s restaurant not only achieves flawless consistency and flavor, the mixture of lobster, mussels, shrimp, chicken and chorizo in the Paella Mixta also makes for a rich Spanish experience unequaled at competing venues.

Travel journalist David Yeskel, aka The Cruise Guru and The Vegas Guru®, has written extensively about the cruise industry and Las Vegas.