As a city person, I love nothing more than landing in a new destination and exploring on foot, discovering lively neighborhoods and trying local specialties. In Los Angeles, the sheer size of the city and its many neighboring communities makes covering significant ground almost impossible. Though I’d visited LA and suburbs like Anaheim a number of times, the city had never clicked for me.

During a recent trip, however, I finally found my LA groove. Rather than trying to do it all, I set my sights on four neighborhoods known for their excellent gluten-free food, top-notch attractions and relative walkability. Whether you’re visiting for the Hollywood glitz and glamour and world-class shopping or you’re just passing through en route to the theme parks, take a detour to my favorite spots for dining and exploring in LA.

The area’s restaurant offerings make this neighborhood a true destination, especially with options like Broken Spanish. Chef Ray Garcia, a Los Angeles native, has long been known for his ability to appeal to gluten-free diners, and I found plenty to appreciate at this modern Mexican hotspot.

The Beet Pibil starter, a creative take on a traditional pork dish, is a spicy way to start a meal, and the seasonal tamales put a contemporary touch on a classic dish. Most menu items here are naturally gluten free, and the staff members can easily make safe recommendations.

Want something a little simpler? Broken Spanish’s sister restaurant, B.S. Taqueria, is just a few blocks away and boasts plenty of meaty and vegetarian bites. Here you’ll find new takes on classic tacos, with combinations like lardo and clams or mushrooms and garlic.

SEE THE STARS IN HOLLYWOOD

From luxury stores to classic theaters to landmarks like the Hollywood sign, the Hollywood Walk of Fame and the Hollywood Bowl, this neighborhood is about much more than celebrity sightings. For me, the star here is the food.

I recommend starting with the Salsa Trio, a colorful plate with pico de gallo and mango and pineapple salsas, or the Guacamole con Tortillas, because fresh guacamole is always a good idea. Next, dig into veggie tacos with cauliflower and almond pesto or grilled zucchini and salsa verde, or go for the tamal stuffed with sautéed squash and poblano peppers. Don’t forget to ask for the tamal mojado style, and it will arrive topped with Gracias Madre’s signature, rich mole sauce.

Walk off that great lunch at Gracias Madre by heading south of Hollywood to Beverly Grove. Just past the department stores of the Beverly Center shopping area, West Third Street is lined with small shops and boutiques. If you need something sweet to get through the afternoon, stop at fōnuts, a hidden gem nestled among sidewalk cafés and coffee shops.

This small bakery specializing in baked donuts offers several gluten-free varieties every day. While not all donuts here are gluten free, the bakery takes great care to keep these donuts separate, including housing them in their own display case.

If your eyes are bigger than your stomach, like mine usually are, be forewarned that these donuts are much heavier and richer than your average gluten-free breakfast pastry. I found that the chocolate donuts looked better than they tasted, but I loved the raspberry vanilla donut’s dense, cakey texture and slightly tart glaze.

SOAK UP SOME CULTURE ON THE MIRACLE MILE

The Getty might be the most popular museum in LA, but there’s plenty of culture right in the heart of the city. The Los Angeles County Museum of Art (LACMA), located on the northwestern edge of the Miracle Mile, is my favorite museum in the city. If you love photo opportunities like Chris Burden’s “Urban Light,” a mesmerizing outdoor sculpture with 200 illuminated streetlights, or exhibitions of groundbreaking contemporary art, you’ll love LACMA, too.

If you are more interested in prehistoric history, automotive marvels or folk art, you’ll find that on the Miracle Mile, too. Stop by the Petersen Automotive Museum for hot rods and concept cars, visit the La Brea Tar Pits and Museum to see a fascinating fossil excavation site, or tour the Craft & Folk Art Museum to see colorful handmade art from around the globe.

Just a few blocks south of the Miracle Mile, you’ll find another must-visit spot: Powerplant Superfood Café. The moment you walk in the door to what must be the friendliest café in LA, owner Cynthia Moore and Chef Tracy VanBree will greet you, eager to explain the menu, offer recommendations, ply you with samples and spread the “good juju.”

If you’re not in the mood for a burger, though, try the Tempeh Reuben or the Barbecue Cauliflower Salad and finish it off with some of Powerplant’s homemade ice cream. If you’re feeling like breakfast for dinner, it’s never too late for Powerplant’s legendary Vegan French Toast, since the café generously serves breakfast all day. You’ll have no problem finding something you love on Powerplant’s 100 percent gluten-free, completely organic and mostly plant-based menu.

KICK BACK AT THE BEACH

When I need a break from the endless traffic and hustle and bustle of LA, I head for the beach. While it isn’t easy to find a secluded stretch of sand here, there’s plenty of sunshine, people watching and amusements all the way from Marina Del Rey to Santa Monica. And did I mention how great the food is? 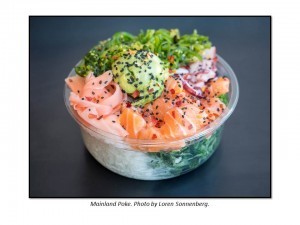 For one of the freshest meals in LA, I love Mainland Poke in Marina Del Ray. This LA mini-chain is a standout in the poke market, thanks to its commitment to sourcing freshly caught fish every day. Most local spots that specialize in this Hawaiian dish use frozen, marinated fish, but you’ll find nothing less than fresh tuna, salmon and octopus on Mainland Poke’s menu.

A sort of poke pioneer in the LA area, owner Ari Kahan ate his way through five Hawaiian Islands before launching the Mainland Poke concept in Southern California. High-quality ingredients are the focus here, and you’ll see everything from sushi-grade fish to seaweed salad to mango to pickled ginger on display right when you walk in the door.

Ari designed the menu so that you can’t go wrong no matter what you add to your poke bowl. He also made it easy to eat gluten free here, since the only gluten containing menu items are optional soy sauce-based sauces that are easy to avoid. My go-to bowl includes salmon, octopus, avocado, pickled ginger, seaweed salad and sesame seeds for an ideal mix of fresh ocean flavors. 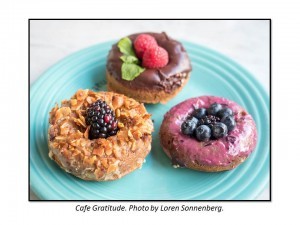 Feeling more like a hearty brunch? Just north of Marina Del Rey and a few blocks from the beach, Café Gratitude is my top pick in Venice. Everything on the menu here is plant based, and many options are gluten free, too. The gluten-free pancakes, made with buckwheat, flax and optional cashew whipped cream, are some of the most popular brunch items. If you’re in a savory mood, I recommend the Bonita, a breakfast taco plate with quinoa, black beans, cashew nacho cheese, pico de gallo and corn tortillas. Whatever you choose, though, don’t forget the donuts. Café Gratitude makes a few daily flavors, so you could luck out with coconut maple bacon, chocolate frosted or seasonal berry donuts.

Once you’ve had your fill, head out and soak up some sun on the beach. Go for a dip in the Pacific, stroll or bike along the Venice boardwalk, or get your thrills on Santa Monica Pier. With more than four miles of beach to explore, you’re bound to find a spot that appeals to you.

From the beach to downtown LA, there’s so much to do, see and eat in this sprawling city. Though I know I’ll never cover everything, I’m thrilled at having found some highlights that help me focus my energy. With thoughtfully prepared gluten-free dishes to keep me fueled, I can truly enjoy the laid-back Southern California vibe as well as the glitz and glamour that shine throughout the City of Angels.

Travel Editor Anna Sonnenberg is a food and travel writer who has journeyed around the world gluten free since being diagnosed with celiac disease in 2012. She launched her website, glutenfreejetset.com, in 2013.