The gluten-free pate a choux has a very dry exterior while the interior is quite soft and moist. 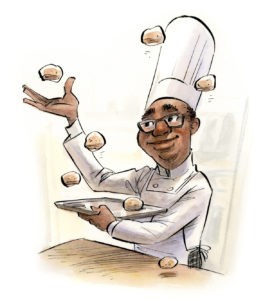 Pate a choux, or choux paste, is what bakers produce first to make eclairs and pastry puffs with luscious cream fillings. It’s a unique substance. I refer to it as a “paste” because it cannot be shaped or directly handled with one’s hands. Nor can it be rolled out or cut into portions. Classically, it is piped using a pastry bag.

The task begins with making a mixture very similar to a roux, a combination of melted fats and flour cooked or baked to varying degrees, then used to thicken soups, stews and, of course, sauces. Pate a choux takes this concept further, by using additional liquid and incorporating eggs.

Pate a choux is first cooked on the stovetop, cooled slightly, then finished by adding eggs. After scooping it out or piping it into various shapes, it is then baked. Baking heats up the water-based liquids and the eggs to boiling, creating steam, which leavens the shell before the structure forms. The shell’s exterior is very dry with multiple breaks in the surface, while the interior is quite moist, soft and notably blown-apart.

A pate a choux mixture should be fully cooked before adding eggs to it, so that it achieves correct leavening action. Undercooked choux mixtures can result in greasy dense shells.

The typical ratio for pate a choux is 2-1-1-2—that is liquid-fat-flour-eggs, by weight.

The two parts liquid is either water or milk. The liquid is a primary binding substance and major contributor to the creation of the steam that forms the leavening. Water will produce a more dry-crispy shell with not much shine, while milk can soften the exterior a little while providing more shine.

The one part fat is the major tenderizing ingredient, keeping the flour soft and helping to lubricate the choux paste. The fat of choice is usually unsalted butter, but almost any fat or even vegetable oil will work.

The one part bread flour provides the choux’s overall texture and structure. You will need to cook it within the choux.

As for the gluten-free perspective, here’s the tricky part. The primary concern is, of course, the flour. With whichever gluten-free flour you use, the concern is twofold. First, how well does the flour cooperate during the expansion of the choux? Secondly, will the flour provide the strength to not collapse during baking?

Conventional all-purpose gluten-free flour might need some assistance in regard to strength. Replace one-third of the whole eggs with an equal amount of liquid egg whites. The liquid whites will provide more direct steaming and protein strength. The cooked choux paste will probably feel wetter and softer than a traditional bread flour type. That’s normal, so avoid using additional gluten-free flour, which might over-dry the choux during baking. Don’t worry—adding a small amount of guar or xanthan gum to the choux (after cooking, just before adding the eggs) can help. Start with ¼ teaspoon at a time, but do not exceed 1 teaspoon to start. You can also experiment with adding a scant amount of gluten-free double-acting baking powder in the same manner as the gum.

The two parts eggs are added after the liquid and fat have boiled, followed by all of the bread flour. The mixture is then stirred and cooked over medium heat for two to three minutes. Generally, the eggs should be close to room temperature and incorporated into the mixture one at a time (slightly beaten). The eggs are the key to the steaming action-leavening. Some bakers might replace a portion of the whole eggs with whites or even yolks but start with whole eggs. Mix in by hand or use a stand mixer with a paddle attachment.

Lastly, it may be necessary to pipe the gluten-free choux pastry into a mold, which can help maintain the pastry’s shape and height. Lightly grease the mold first, and then dust with gluten-free flour.

The choux paste is piped while it is still warm so that the baking and steam formation will be most effective. The preheated oven needs to be hot to make the overall liquids and fat boil quickly, forming steam. Allow for the explosion to occur without opening the oven door, which can cause collapsing from the introduction of cold dry air. Carefully take a peek after about 15 minutes. You should see the choux develop beads of “sweat” from the interior steam that formed on the exterior. Once the beads of sweat have vanished, lower the oven temperature to 350° F. Bake until a sample is hot to the touch but lighter in weight, with an internal temperature of at least 210° F, which reduces the possibility of collapse.

After cooling, the choux pastry items can be bagged and left at room temperature for one to two days—or bagged and stored in the freezer. When ready to use, remove from the bag and refresh by heating up in a warm oven for a few minutes.

Inspired to do a little gluten-free baking? Look through our constantly growing collection of delicious dessert recipes.

Mastering Five Amazing Gluten-Free Recipes To Be Safe
Share This