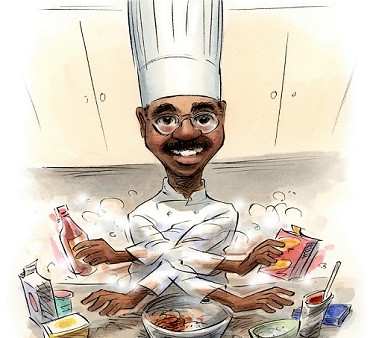 Generally speaking, substituting ingredients in recipes is ill-advised, especially if it’s a recipe you’ve never prepared before. But what if you have multiple dietary restrictions? Or what if you’re already halfway through a recipe and you realize you’re out of milk, wine or lemons? Worry not! Chef Richard Coppedge Jr. is here to answer common questions about recipe substitutions: when they work, when they won’t and what to expect of your final outcome.

A simple syrup with a drop of lemon juice can work in many cases. Simple syrups really are “simple.” Just bring one
cup of white granulated sugar, one cup of water and one teaspoon of lemon juice to a boil in a saucepan. Once boiling, remove the syrup from the heat, let cool and then store in the refrigerator until needed.

Generally, most nut flours are interchangeable. Keep these two things in mind when substituting, however. First, I recommend using a “blanched” nut flour, which has had the outer skin removed during blanching. Secondly, different nuts have unique flavors and some differences in oil/fat content, so a recipe made with almond flour and a recipe made with hazelnut flours may turn out quite differently.

Can I swap out nondairy milk for regular milk in baking recipes?

Yes, of course. Without the dairy, there will be differences in flavor and protein content. Fat content in nondairy milks tend to be much lower than “regular” milk (except for coconut milk). Soy milk tends to curdle if heated too quickly, and some soy milk is sweetened with (gluten-containing) barley, so be careful what you buy. You can use the same amount of nondairy milk by volume as dairy milk. If you are trying to substitute nondairy milk for buttermilk, just add ½ teaspoon of lemon juice or white vinegar to 2 cups of nondairy milk and shake or mix thoroughly.

Is coconut oil a one-for-one swap with butter in recipes?

When a sauce or gravy calls for regular flour, what’s the best substitution?

Use a mixture of three parts cornstarch and one part potato starch or tapioca starch.

Can I use garlic powder instead of fresh garlic in a pinch?

Yes, but not too much. Avoid using garlic salt due to the sodium content, especially if the garlic is used early in the cooking/baking process because the sodium in the garlic salt will become more intense as the product loses moisture. If you need to use garlic salt, season with it at the end, just minutes before serving.

Is bottled lemon juice a good substitute for fresh?

Can I swap out honey for maple syrup in baking recipes (and vice versa)?

When a recipe calls for beer, what can I use instead (besides gluten-free beer)?

Most likely, the beer is being used for its flavor and possibly for its carbonation and not so much for the alcohol content. Consider using another type of carbonated beverage, ranging from seltzer water to some type of soda that is not a “diet” soda.