During pregnancy, women need to make a number of dietary adjustments. Between eating more from certain food groups, limiting others and avoiding certain foods altogether, a pregnant woman with celiac might wonder where dining out gluten free fits into her pregnancy and whether she should approach it differently.

“Though there are additional dietary precautions that all pregnant women are advised to take,” notes Benjamin Lebwohl, MD, MS, director of clinical research at the Celiac Disease Center at Columbia University, “there are no additional restrictions regarding the gluten-free diet that apply to pregnancy. One should always take sensible precautions to avoid cross-contamination, pregnant or not.”

While dining out is something that anyone with celiac gives a great deal of forethought to, it warrants special attention as it applies to pregnant woman.

During pregnancy, every woman will make choices that she feels comfortable with when dining outside the home. Mother of two Sue Moller made a personal decision to tweak how she dined out with celiac during pregnancy. “When eating out while pregnant, I definitely changed some habits,” Moller explains. “I was less willing to ‘take a risk’ on a [restaurant I was unfamiliar with] and only frequented places I fully trusted with their knowledge of safe gluten-free [preparation]—separate utensils, separate prep areas, change gloves, et cetera—and ate out less often.”

She notes that she was very thorough in how she approached communicating her needs and what she ordered. “I asked more questions than normal and would stick to ordering things that I considered safer, such as things that didn’t need to go on a shared grill or in the same oven.”

Moller notes that she did not speak to either her obstetrician or gastroenterologist about dining out during pregnancy. While pregnant with her eldest, she had been on the gluten-free diet for almost six years and “was pretty confident in my knowledge of eating gluten free and the issues surrounding this.”

Jessica Iselin, a registered dietitian with celiac, approached dining out similarly to Moller while pregnant. “I tended to stick with restaurants I already felt comfortable with from a gluten-free standpoint,” Iselin says. She also took the time to do her research before dining out. “Calling ahead was helpful if I had questions about specific menu items and wanted to be assured before I arrived at the restaurant.”

For a woman with celiac, the most dramatic adjustments when it comes to eating—whether at home or at a restaurant—result from pregnancy dietary guidelines. “I recall in early pregnancy feeling somewhat overwhelmed with additional considerations when eating out,” explains Iselin. “I’ve had celiac disease most of my life, so I’m very used to scouring menus and asking all the appropriate questions about ingredients and cross-contamination.” Eating out during pregnancy “meant additional considerations, like making sure the queso fresco in my Mexican food and the goat cheese in my beet salad were pasteurized” as well as “avoiding raw sprouts and high-mercury fish,” she says.

Iselin credits those around her for helping to ensure she ate safely during pregnancy. “Luckily, my husband and friends were helpful and didn’t mind when I had to think out loud, ‘Is it gluten free and safe for pregnant folks?’”

Listeria. One of the big concerns for pregnant woman is consuming food items that could contain the bacterium Listeria. “Unlike most other bacteria, Listeria can grow in refrigerator temperatures,” explains Amy Keller, MS, RDN, LD, a dietitian and celiac support group leader in Bellefontaine, Ohio. “Pregnant women are more at risk for contracting listeriosis [the infection caused by Listeria] than those who are not expecting.”

What foods can pose a risk? “Listeria can be found in ready-to-eat refrigerated items such as hot dogs, lunch meat and unpasteurized dairy products [raw milk and soft cheese, for example],” says Keller. “For this reason, it is recommended that deli meats/hot dogs and other precooked foods are heated to a minimum temperature of 165° F and avoid unpasteurized dairy and smoked seafood.”

Mercury. Another important consideration for pregnant women is mercury content in fish. “Choose fish that is low in mercury, such as cod, salmon, haddock, shrimp, scallops and canned light tuna,” Keller advises. “These fish can be eaten safely [in 4-ounce servings] two to three times per week. If you choose grouper, halibut, canned albacore tuna or snapper, for example, limit that fish to one serving per week.”

Some fish should not be consumed during pregnancy. “Avoid king mackerel, swordfish, shark, marlin, tilefish [from the Gulf of Mexico], orange roughy and bigeye tuna,” Keller says. Make sure that fish is fully cooked before consuming. Avoid raw and undercooked fish altogether. For those with any questions on eating fish during pregnancy, Keller recommends the U.S. Food and Drug Administration’s Advice About Eating Fish chart. 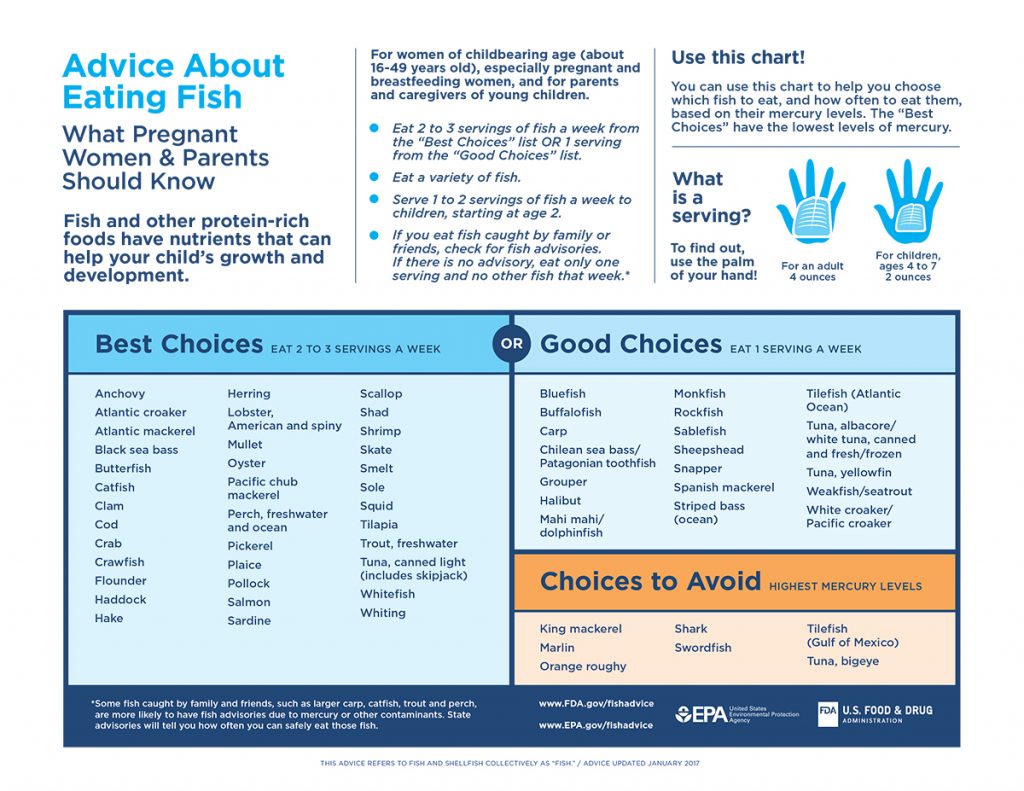 Speaking with your physician

Pregnant women should discuss celiac with their obstetrician. “It’s good to have a very open and transparent relationship with your obstetrician,” says Janet M. Choi, MD, reproductive endocrinologist and medical director of CCRM New York fertility clinic. “Anything that’s health related that can impact the health of the mother and the pregnancy is crucial.”

Given the role that gastroenterologists (GIs) play for individuals with celiac, is it critical for a woman to inform her GI that she is pregnant? “It can be helpful to involve a gastroenterologist during pregnancy, particularly if new symptoms such as heartburn or constipation arise,” notes Lebwohl. “It is also very important that a woman planning a pregnancy take a daily prenatal vitamin, particularly given that the gluten-free diet can be deficient in folic acid, which is essential for a developing fetus.”

During pregnancy, women should speak with their physician to ensure they are meeting both their pregnancy and individual nutritional needs.

Eating out is not the only way to dine with friends. A meal in can be just as—if not more—fun. Iselin spent plenty of time doing so during her pregnancy. “I also often opted for dinner-party or potluck-style gatherings with friends and family to cut back on restaurant eating a bit with the dual purpose of limiting possible gluten exposure or foods that might not be safe during pregnancy and to save money” because, let’s face it, as she notes, “babies are expensive.”

Gluten-Free Products for Kids from California Baby
Share This