What the discussion means for those on the gluten-free diet

By Mary Beth Schweigert
Second in a series

Ray Gaesser started farming 46 years ago, at age 15. Since then he has witnessed a remarkable transformation in techniques that makes his work easier and more efficient.

Gaesser is dedicated to his job and to the quality and safety of the soybeans and corn he and his family grow on 6,000 acres in southwest Iowa.

So he has a hard time understanding the criticism sometimes aimed at farmers who use products that contain genetically modified organisms, or GMOs.

“It really pains me and hurts me that some people want to paint us in agriculture as only out there for the money, and that’s not true,” says Gaesser, president of the American Soybean Association, based in St. Louis. “We’re out there because we feel it’s our purpose in life. We need all the innovations we can … to do an even better job.”

Gaesser and other proponents say GMOs, which are genetically altered to promote pesticide tolerance and other positive traits, lead to increased crop yields and promote more efficient and environmentally friendly farming practices. GMOs cut costs for both growers and consumers, he says, allowing more farmers to stay in business.

“Technology [including GMOs] has been a benefit to us on our farm and almost every farm in the United States,” Gaesser says. “It’s hard for most of us in agriculture to understand the resistance. … In our view, it has so many benefits.”

The GMO issue has ignited interest across the country, including the gluten-free community. Many people on the gluten-free diet also choose to steer clear of foods that contain GMOs, as part of an overall focus on natural ingredients and health. “There’s an increased awareness about GMOs in general happening all across the country,” says Caroline Kinsman, spokeswoman for the Non-GMO Project, a Bellingham, Wash.- based third-party certifier of non-GMO foods. “Gluten-free consumers tend to be very educated on what they’re eating.”

Several ingredients commonly found in gluten-free foods are also likely to be genetically modified or at risk for contamination. The Non-GMO Project reports that 88 percent of corn and 94 percent of soy grown in the United States are genetically modified. Rice and flax made the group’s watch list, which means suspected or known incidents of GMO contamination have occurred or cross-pollination with GMO plants is possible. Plenty of farmers and food companies fall on either side of the GMO debate. Supporters argue that GMOs are perfectly safe and consumers simply don’t understand their value.

“Biotechnology [including GMOs] has been a really good tool for growers to use over the last 10 years,” says Nathan Fields, director of biotechnology and economic analysis for the National Corn Growers Association.

“This is the way we see modern agriculture going. It’s getting more efficient every day.”

Farmers and companies that produce non-GMO foods see it differently. They recognize an opportunity to fill a growing niche by catering to increasingly vocal consumers who are skeptical of GMOs and their potential impact on people, animals and the environment.

Gluten-Free Living interviewed growers and producers to get perspective from both sides of the debate.

THE FUTURE OF AGRICULTURE?

Primarily, genetic modification offers increased protection against weeds and pests, which has a long list of benefits, including larger, more predictable crop yields, he says. GMO corn generally requires fewer chemicals to fight weeds and pests, he says, which is both more economical and safer for consumers and the environment.

“It’s about offering growers and producers the ability to preserve yield and have a greater amount of efficiency,” Fields says. “It [GMO] saves on active ingredients reaching the soil, and it saves on trips across the field [for tillage or cultivation].”

Newer, more high-tech farming techniques are considerably better for soil health and the environment, which are areas of great concern for most farmers, Gaesser says. Growers who use GMO products can increasingly rely on no-till techniques, which leave residue from previous crops in place to protect soil from erosion caused by heavy rain and winds.

“We want to protect our soil,” Gaesser says. “We want to keep it in place. We want to have our farm be as good as or better than it was when we took over. We want it to be … sustainable and there for the next generation.”

Farmers who save money by using fewer pesticides and less labor-intensive techniques pass that financial benefit on to consumers, Gaesser says. The use of GMO products leads to more consistent crops, which is critical to feeding the world’s growing population, he says.

“If our consumers want a consistent, certain food supply, we need to use biotechnology,” he says.

Fields accuses some GMO opponents of playing to consumers’ fears with buzzwords that create uncertainty and provoke an emotional response. Companies spend millions of dollars on research and testing before any new product reaches the market, he says.

“There are a lot of details people just don’t understand about technology,” Fields says. “When there is uncertainty about how something works, people are tentative. … These are well-tested and well-understood products.”

The U.S. Department of Agriculture, Food and Drug Administration and Environmental Protection Agency have evaluated the safety of GMOs, Gaesser says. Growers’ families live on the farms and consume GMO products, he points out, making a strong statement that they, too, believe GMOs are safe.

“I think [consumers] have been led to believe GMOs are not safe,” Gaesser says. “There is no scientific evidence at all that would substantiate they should be fearful.”

Growers of non-GMO crops are equally convinced that their approach is the wave of the future. That includes Lundberg Family Farms, an early adapter of organic rice-growing techniques and now a leading producer of non-GMO rice products.

Chief Executive Officer Grant Lundberg, whose grandparents founded the Richvale, Calif.-based company in 1937, calls himself as an “outspoken advocate” of non-GMO farming. Lundberg served on the Non-GMO Project’s board of directors and lobbied for a mandatory GMO labeling law in California, which ultimately did not pass.

“Interest in non-GMO rice and rice products is definitely growing, he says. “We recognize the consumers’ interest in knowing how their food was produced and what ingredients are present.”

Lundberg Family Farms opposes GMOs for several reasons, he says, including the possibility of negative effects on people and the environment. The company caters to consumers who share those concerns — and has found a growing number of them.

“Just as the use of non-GMO ingredients has not raised the price of our foods, the addition of non-GMO labeling to our packaging has not, and will not, increase the cost of our products,” he says.

When Erickson first started growing white corn in 1976, a non- GMO variety was his only option. Decades later, when genetically modified white corn became available, Erickson Farms chose not to make the switch.

Growing non-GMO corn comes with more risk but also the potential for higher rewards, in the form of premium prices, Erickson says.

“It does cost more to produce [non-GMO corn],” he says. “Sometimes we get that back in premiums, and sometimes we don’t. … We’ve had lean years and crop failures. We’ve had some record crops, too,” including each of the last three years.

Growing non-GMO corn can be labor-intensive, Erickson says, including more frequent applications of herbicides and insecticides. Preventing cross-pollution from a neighbor’s GMO crop is his No. 1 concern.

In recent years, Erickson has seen a surge in consumer and industry interest in non-GMO foods.

“I recognized early on I had to be different from everybody else,” he says of his decision to grow non-GMO white corn and stick with it. “I’m not a tree hugger, but I do believe in quality and safety, and trying to do everything we can to build a product consumers are asking for.”

In fact, Erickson Farms will soon expand its business to produce private-label non-GMO corn snacks for major grocery chains. Erickson sees an opportunity to give today’s more educated consumers exactly what they want, and in turn, continue to make a living as a farmer. “Non-GMO isn’t going away,” he says. 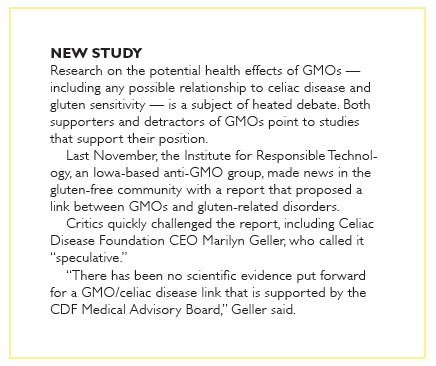 An ongoing state-by-state battle over mandatory GMO labeling laws pits passionate consumer and industry groups against food manufacturers and farmers, with no clear winner so far.

In the wake of the Washington law’s defeat, Pamela G. Bailey, president and chief executive officer of the Grocery Manufacturers Association in Washington, D.C., reaffirmed the group’s determination to fight labeling efforts in individual states.

“The food and beverage industry is committed to providing consumers with a wide array of safe and affordable food and beverage choices,” she said in a news release. “Genetically modified food ingredients (GMOs) are safe, good for the environment, reduce the cost of food and help feed a growing global population of 7 billion.”

Meanwhile, Right to Know GMO — A Coalition of States, which includes political leaders, nonprofit organizations and organic companies, stands firmly on the other side of the issue.

“A growing number of Americans are increasingly concerned with studies that demonstrate potential harm to human health and the environment from genetically engineered foods and want to avoid them, but are unable to without labels,” the group says on its website. “We believe that it is a democratic right to know what we’re eating and feeding our families.”

As of early 2014, several states were considering legislation that would require labeling of GMO products. For the latest information on legislation in your state, visit righttoknow-gmo.org.

High-risk ingredients and the gluten-free diet

People who follow a gluten-free diet will find even fewer choices if they want to eat foods that are also non-GMO. And they will likely pay premium prices.

Corn and soy — two ingredients among the most likely to be genetically modified — are often found in gluten-free foods. Other common ingredients, including rice and flax, are at risk for cross-pollination from neighboring GMO crops.

But other sources aren’t so obvious. For example, she says, gluten-free products that may contain GMO corn also include cereals, crackers and other salty snacks; gravies and sauces that use cornstarch instead of wheat flour; and foods sweetened with corn syrup, which range from yogurt and desserts to salad dressings.

GMO soy is a common ingredient in the overall food supply, including gluten-free products, Begun says. It is found in Asian foods, vegetarian meat substitutes and products where soy lecithin acts as an emulsifier, preventing separation of water- and oil-based ingredients.

Gluten-free foods that are likely to contain rice include breads, cookies, crackers and other baked goods; baking flour mixes; gravies and sauces; breaded meat and fish products; and cold and hot cereals, she says.

Flaxseed, one of the few plant-based sources of omega-3 essential fatty acids, has become an increasingly popular ingredient, Begun says. “Whole flaxseeds and flaxseed meal are common in gluten-free products made with grains, such as hot and cold cereals and baked goods such as breads, muffins and pancakes,” she says.

Mary Beth Schweigert frequently writes for Gluten-Free Living. This is the second of a four-part series she is doing on GMOs and the gluten-free diet. Schweigert is a newspaper reporter who covers food, health and other lifestyle topics in Lancaster, Pa.

Sending Your Gluten-Free Kids Back to School
Share This

2 thoughts on “Breaking Down the GMO Debate”