Mia Wurster has cooked alligator, had her food critiqued by Chef Gordon Ramsey, appeared on national television and hosted her own gluten-free cooking videos. She is the primary cook for her family. Her Facebook fan page has more than 500 likes. 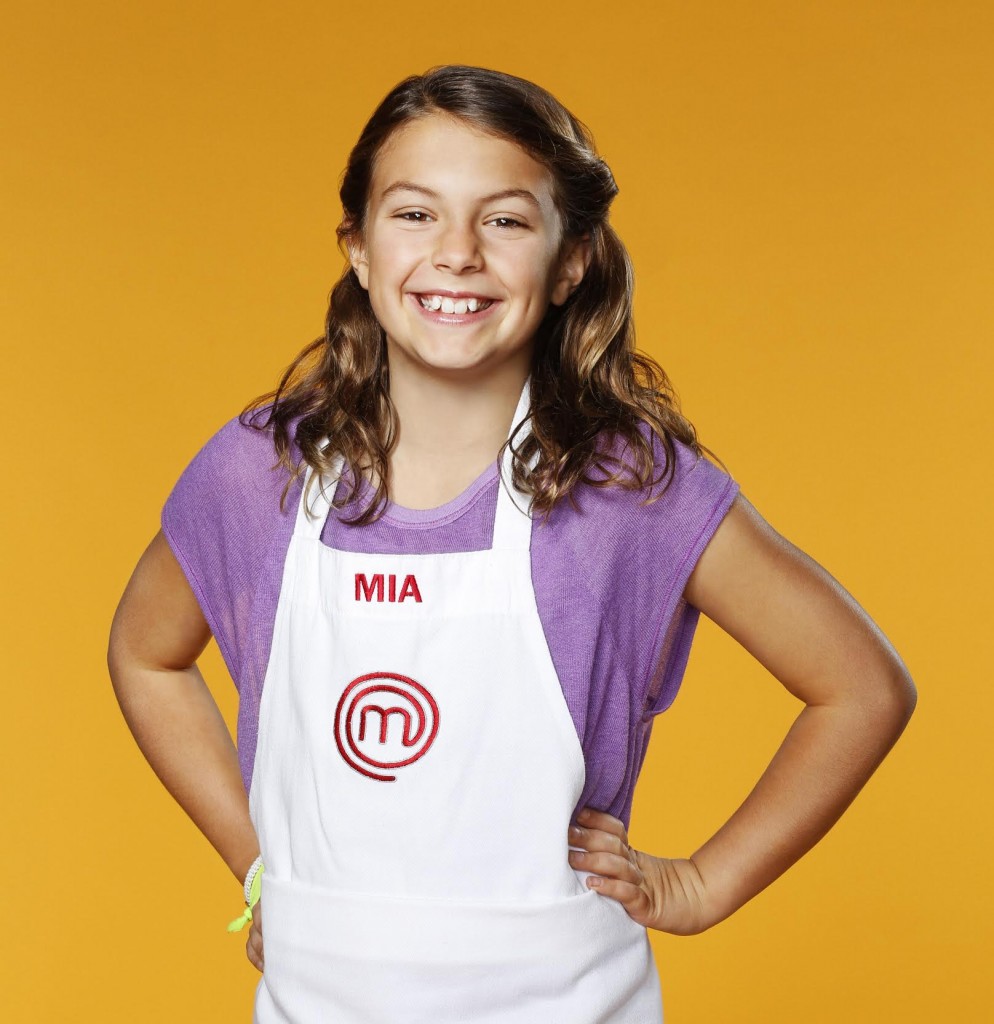 Wurster’s family has been gluten free since a nutritionist recommended the diet for Mia’s sister Faith, who has cerebral palsy. Wurster initially wasn’t too thrilled about the new gluten-free diet. But instead of complaining, she started making gluten-free meals and ultimately became her family’s primary cook.

Her time in the kitchen was well spent. She was accepted as a contestant on season three of MasterChef Junior, which began airing on Fox on January 6th.

Wurster made it to the final 12 on the show before being sent home, but her journey in the gluten-free kitchen continues. In our interview, she talks about her time on the show and cooking gluten free for her family. She also shares the secret to what Ramsey called “the best sausage of the year.”

Can you tell me a little bit about your sister Faith and your family’s decision to go gluten free?

My sister Faith is my best friend and is sweet, kind and a lot of fun. She is also the hardest working kid I have ever seen and has overcome so many challenges. To be her best, she does a lot of therapy and also eats a very special diet that includes no wheat and no dairy.

Being gluten free has really helped my sister and has been great for our family. My parents always say they are not sure if we could have done this if I hadn’t stepped up in the kitchen.

How long have you been cooking?

I can remember making pancakes with my dad when I was 2 years old. I could flip them by myself, but it made my parents a little nervous. Then I started to make guacamole and bake cupcakes. I make the best homemade frosting.

I started to become a real cook when we went gluten free, and I started making our dinners. I was making fish, chicken or a vegetarian gluten-free dish most nights. I was watching cooking shows like Barefoot Contessa or MasterChef Junior and going to restaurants to get ideas. I also read cookbooks. I would experiment a lot and try to get better every night.

What’s your favorite gluten-free dish to make for your family?

All of my dishes are gluten free. I like cooking fish, but my favorite dish to cook is parmesan and almond flour crusted chicken stuffed with goat cheese and roasted red peppers with a cauliflower puree and broccolini. I also really like the gluten-free lasagna that I make with zucchini instead of pasta. If I ever get upset about being gluten free I make my lasagna because it is way better than the real thing and a lot better for you. Check out my Facebook page, Mia Junior Chef, for a demonstration on how to make it.

How would you describe your cooking style?

I like to experiment and try new things. I try to cook healthy because I think food should taste great but also help you be your best. I know from watching my sister and [from] how I feel that eating right really helps your performance.

I saw a video of you in your grandparents’ garden – it looked huge! What are your favorite ways to use fresh vegetables?

What was the hardest part of transitioning into a gluten-free lifestyle?

The hardest part of being gluten free is lunch at school. My friends will often trade tasty treats that I can’t eat. I also want to have sandwiches like my friends, but some gluten-free bread is not very good for you, and the healthier breads have a hard time of staying fresh during the day. So my lunches are not as exciting as the dinners I make.

What advice would you have for a kid who is just starting out on the gluten-free diet?

I would say that you will feel so good once you stop eating gluten. You will have more energy, less stomachaches and just feel better. I would say gluten free doesn’t mean taste free and that you can learn or create great gluten-free recipes. You can use almond or oat flour to create just about any dish that would have had gluten. I make a pizza from almond flour that my family loves. I make the dough and my sister Faith puts on the toppings.

I would also say to pay attention to gluten-free labels. Just because something says it is gluten free doesn’t mean it is the best thing for your body–you have to look at the ingredients. I would tell people to look for recipes using almond flour and oat flour.  My sister Faith and I make really great pumpkin pancakes with almond flour. Also, last week Faith got a recipe for zucchini muffins. We substituted oat flour for regular flour and coconut sugar for regular sugar and the muffins were so good! We gave them to people at school, and no one knew they were gluten free or low sugar.

I would also say that many people have given up gluten and done very well without it. I love to swim and when we went gluten free I read a lot about Dana Vollmer and how she gave it up and went on to swim her best – her story was a real inspiration for me.

I saw your worried reaction to the homemade pappardelle challenge on MasterChef Junior. Some of the other contestants said they had previous experience with fresh pasta. Were you especially concerned about making gluten-containing pasta because your family has been gluten free for so long?

Yes, I was worried! All my friends on the show told me how they make fresh pasta weekly for their families! Luckily, I had seen Season 1 of Masterchef Junior so many times and watched the kids make the pasta on the first show. When I was practicing for MasterChef Junior, we bought a pasta maker just in case the challenge came up again, and I wanted to be prepared.  When I was practicing at home, I made buckwheat pasta but that is much harder to make than regular pasta. So, when it came time for the pasta challenge, it went much better than I expected.   Once I got going I felt very comfortable as it was much easier than making buckwheat pasta! By the way, they did not show it on TV, but my dish got great reviews from the judges and they loved the fried egg on top!

Did you do anything special to prepare for your time in the MasterChef kitchen?

Yes, I practiced a ton! I also went to restaurants for inspiration and came home and recreated those dishes. I was already a great cook, but in the two months before [the show] I think I spent about 15 to 20 hours in the kitchen each week – which was a lot because of school and swim practice! I also took two cooking lessons before the show to work on some types of meat. While I cook lots of fish and chicken, my dad is a vegetarian, and we don’t eat meat that often. I wanted to make sure I knew how to braise, grind, sear and use all other techniques on all kinds of meat. Unfortunately, we never practiced making alligator (I was kicked off on alligator)!

You did especially well in Episode 2 with the team sausage-making challenge. You and the other contestant Jenna seemed to have a very smooth partnership. Do you think having a sibling who helps you in the kitchen helped you be a team player in that challenge?

A lot of times when I cook it will either be with my sister Faith or one of my friends so I am very comfortable working together with someone in the kitchen. Also, Jenna and I are really good friends, and we ate together every night and still talk all the time. She is so nice and really easy to get along with and work with so I was thrilled to be on her team.   I went to visit her last summer on the East Coast and will go again this summer!

Chef Gordon Ramsay said your sausage in that challenge was the “Best Sausage of the Year.” I’ve tried to make homemade sausage a few times and it always comes out dry! Got any sausage-making tips to share?

The key is getting the balance right between the meat and the fat. I’d say you want 25 to 30 percent fat.   Ingredient choice is a huge part of the competition on MasterChef Junior. We chose chorizo, which has some fat, and we knew would have a nice spice and keep our sausage juicy.

Mia and Jenna serve the judges their winning sausage dish.

What would you say to encourage kids who want to start cooking gluten free for their families?

I would say it is fun and rewarding and can help you and your family feel great. I would encourage kids to experiment with different recipes and foods and to realize that what you cook is probably not going to be great the first time you try it. Gordon Ramsay wasn’t born a brilliant cook, he had to work hard to get better, so always have fun in the kitchen. But don’t worry if what you make isn’t quite as good as you were hoping. If you had fun in the kitchen and you’ve made something your family can eat, you’ve accomplished something great. And remember, gluten free does not mean taste free!

Sending Your Gluten-Free Kids Back to School
Share This