Most parents lean over to help their small children with everything from being fed to cutting and holding their food. For celiac parents, though, mealtime is not as simple as letting their child stick his or her fork on their plate after they have been indulging in something with gluten. They cannot simply break their child’s big piece of gluten-containing pizza into smaller pieces and then go back to handling their own gluten-free food. How do parents with celiac avoid cross-contamination when their children are eating gluten?

Celiac runs in families. Given the nature of the disease, parents might have questions about their children and eating gluten, especially introducing it. “We used to think there was some critical window that, if you got gluten in, that you could kind of hold off or decrease your risk for developing celiac disease in an at-risk individual. But we’ve since learned that’s not really the case,” explains Jacqueline Jossen, MD, assistant professor, division of pediatric gastroenterology, Mount Sinai School of Medicine. “The general recommendation is to introduce gluten just as you would start introducing other foods to babies between four and six months of age.”

As far as genetic testing for celiac, “some parents really want to know early, and those parents can seek it out,” she says. “But otherwise, the general screening recommendation starts at around 3.” Every family is different and, as Jossen notes, “some parents don’t necessarily want to know, and that’s fine [when it comes to gene testing]. In these cases when the parent [who has a child with a first-degree relative with celiac] doesn’t want to know the result of a gene test, then they should be screened as if they have a positive gene every two to three years.” When it comes to eating gluten, “regardless of whether or not they have the gene [for celiac], unless they have celiac disease there’s really no reason to adjust their diet,” notes Jossen.

Beyond it not being medically necessary for a child without celiac to be on a gluten-free diet, there is a big nutritional reason. “The gluten-free foods are really much higher in fat and sugar and much lower in fiber and enriched grains than the gluten-containing counterparts,” explains Jossen. “You have to read your labels. Even if it’s a product that’s stating it’s gluten free, not every gluten-free product is created equal. Comparing fat and sugar content and then, with grains, just looking at the label and seeing if they contain B vitamins, if they contain folic acid, niacin, these are things that are enriched in gluten-containing grains that are not necessarily in gluten-free products.”

In addition to making sure kids have access to nutrients they need, like the enrichment that occurs in gluten-containing products, kids who do not need to follow a restricted diet should not be put on one because that puts social strain on them. “And then, for kids, remember, there’s this social aspect of it,” Jossen explains, since “gluten is a big part of most kids’ diets, and when you go to school or daycare and snacks are provided, it can become a very socially isolating thing to be kept on a very restricted diet.”

Jossen understands firsthand what it’s like for a parent to be the only one with celiac in a household as she has celiac and her husband and daughter do not. She is very familiar with setting up a kitchen that works for her and her family. “I have this one spot where all the gluten is, but you know it’s not easy with a toddler. She makes a mess,” Jossen says.

“[Kids] want to share. That’s why [my husband and I] double team [during mealtime when it contains gluten],” she explains. While most of the food in their home is gluten free, Jossen has a variety of prepackaged snacks that she can bring along for her family if they are out and craving something with gluten in it.

When an adult is diagnosed with celiac prior to having children, he or she might have preconceived notions about what it would be like to have a child who can eat gluten. Sue Moller, who was diagnosed with celiac in 2005 and had her eldest in 2012, had concerns about how to handle the gluten-free/gluten dynamic between parent and child.

“I was much more concerned before I had my kids,” she says in reference to how she would handle her children eating gluten while being gluten free herself. “And now it’s, really, it’s pretty OK. … I don’t even think I can pinpoint a time that I’ve got glutened [because of handling gluten foods with the kids].”

Moller and her husband have a 5-year-old son and 2-year-old daughter, and the family has found a balance between what works for the kids’ needs and for mom. Her husband said if the children were to have celiac, they would become an entirely gluten-free household. “Right now, I’m the odd man out, so I have everything separate [as the only member of the family with celiac],” she explains. While she is the only one, “anything we cook, we make pasta, it’s gluten-free pastas.” The entire family enjoys gluten-free chicken nuggets, which her kids actually prefer. Recently, they refused gluten-containing chicken nuggets that her husband prepared.

When it comes to eating, she is realistic that getting kids to eat is hard, and she wants as little restriction on their diet as possible. “In the beginning, I didn’t want this stuff in the house,” Moller says, referring to gluten. However, she changed her mind as she realized “there’s the stuff you want them to eat and there’s the stuff they’re actually going to eat. I think you realize you’re going to lose that battle very quickly,” she explains.

For this reason, gluten is a big part of her kids’ diet, and she is always careful around it. Moller even allows her kids to play with Play-Doh, knowing that it contains gluten. “I like them to do it because it’s a kid thing to do. It gets everywhere,” but she handles it just as she handles their eating gluten, with a thorough clean-up and lots of hand washing on her part.

Moller credits the support of her husband, who has “been with me from the beginning” of her celiac, which was diagnosed two weeks before their wedding. As a result, Moller says her husband is “just as well versed in all things related to celiac and cross-contamination.” He often takes the lead on meals containing gluten with the children. “My husband tends to position himself close to them [so if he has to rip something or cut something for the kids, he can do it] so I can avoid crumbs.”

Gluten free is a family effort

Brian P. Bosworth, MD, FACG, chief of medicine at NYU’s Langone Medical Center at Tisch Hospital and professor of medicine at NYU School of Medicine, was diagnosed with celiac in 2002, two years before his eldest was born. At that time, he and his wife made the decision to have a predominantly gluten-free household.

“When I was diagnosed, we made the entire kitchen gluten free with new cutting boards and new pots and pans and really made everything that we were going to be cooking and preparing gluten free,” Bosworth says. The only gluten in the house were gluten-containing cereal and gluten bagels for his wife, toasted in a different toaster. When his children were born, they continued the same kitchen setup, where the only gluten was cereal and bread for his wife and kids.

When his two kids were younger, one of the very important things he recognized was “separation of their food and separation of my own food,” he says. “I was definitely conscious of the fact that when I was involved in any of those activities [involving feeding my children or helping them with food], that I wouldn’t also be eating at the same time so as not to contaminate my own food and [I washed] my hands very frequently in the middle and when we were done,” he explains. Bosworth was also very aware if food fell on tables and counters to assume there might be crumbs.

Over time, the Bosworth family has really found a routine. He emphasizes how important it is for the whole family to participate. “Our decision to make the entire kitchen gluten free,” he explains, as “opposed to making it a regular kitchen and trying to carve out a little gluten-free area was very helpful [for the entire family]. It wasn’t a way of segregating myself and the rest of the family as much as this is how we function as a family.” he says, which has worked very well for them. This inclusiveness is something they continue when traveling, always having a gluten-free snack that everyone can enjoy. This way there is no concern about someone cross-contaminating the bag.

For Bosworth, this support extends beyond how the family eats. This includes his kids understanding why their dad must be gluten free. “We started taking them out to restaurants when they were really young,” he says. They would hear him explain celiac to servers, as well as to others when they went to people’s homes, and through these experiences they began to understand celiac. “So it was just part of a normalized process. This is what daddy can eat, this is what he can’t and we all have to be very careful.”

Bosworth and his wife have been upfront with their kids that if they make an error in the kitchen and cross-contaminate anything, just to let them know. “They were very good about coming to one of us if they made a mistake and put [a] knife in the wrong thing or used the gluten-free cream cheese on a bagel. We said, ‘That’s OK, thank you for telling me.’ It was always very positive reinforcement,” he notes.

Moller is already thinking ahead about how the kitchen setup might have to change now that her son is in kindergarten. “My son is starting to get to that stage [when he is starting to engage with the kitchen a bit more independently],” she explains. While before, “I didn’t have to worry about [my son or daughter] grabbing the wrong peanut butter, [this is something that I have now started to think about].”

However, just as all families make changes as the kids grow, she, too, will do the same. Moller is already thinking about moving the designated gluten-free peanut butter to a higher shelf. 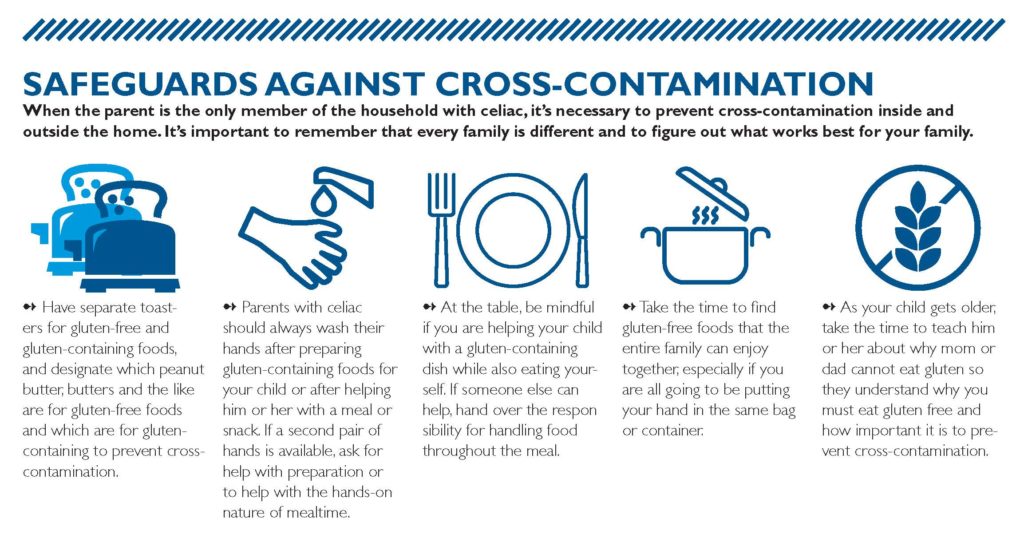