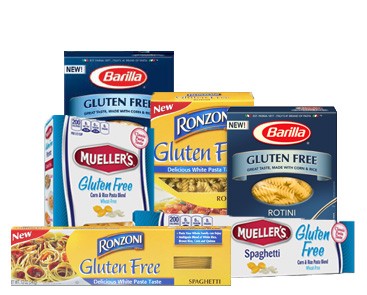 Three mainstream pasta companies, Ronzoni, Barilla and Mueller’s, each added gluten-free pastas to their lineups this summer. The products were launched just as the Food and Drug Administration approved a new standard for gluten-free labeling.

Ronzoni set the wheels in motion with its four-ingredient blend of white rice, brown rice, corn and quinoa. Its gluten-free spaghetti, penne rigate and rotini each contain 19 grams of whole grain and 200 calories per serving. The pasta is low in fat and sodium- and cholesterol-free. It’s produced in a dedicated gluten-free facility and is available at select U.S. grocery stores. Check out the Ronzoni pasta locator online to find a distributor near you.

Mueller’s followed close behind with its gluten-free pasta blend of corn and rice, now available in select grocery stores. The sodium-free spaghetti, penne and fusilli are 200 calories per serving. Although the company does not use separate equipment to produce gluten-free products, its website says that Mueller’s has “a very detailed protocol in place to prevent cross-contamination and ensure safety for consumption. The gluten level of the product is verified to ensure that it does not exceed 20 parts per million.” The new gluten-free standard is less than 20 ppm.

Barilla’s gluten-free line launches in select U.S. grocery stores in September, with national availability starting in 2014. Barilla offers the most gluten-free options of the three brands: spaghetti, penne, rotini and elbows. Made with a combination of non-GMO corn and rice, the pastas are produced in a dedicated gluten-free facility in Italy.

“We felt it was important to invest in developing a pasta line for the ever-increasing number of people who are adopting gluten-free lifestyles, ensuring that it delivers the taste and texture pasta lovers expect from Barilla,” Claudio Colzani, Barilla’s chief executive officer, said in a statement.

The three pasta brands expand gluten-free consumer choice, and that’s worth celebrating with a glass of Italian wine and a healthy helping of spaghetti. Buon appetito!