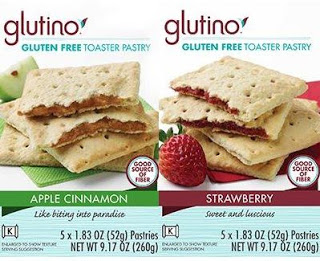 There are some products that gluten-free consumers have been longing for a quite awhile. Sometimes it doesn’t really make sense that these particular items end up on the what-I-want-most list (such as gluten free pop tarts). Often they’re not gourmet foods, but basic things fondly recalled from gluten-eating days or foods that gluten-free kids want because other kids have them.

Pretzels were on the list for a long time until several companies came up with palatable packaged gluten-free products. Even if you don’t eat them very often, it’s nice to know you can if you want to.

I put Pop Tarts in this category. Surely they’re not the tastiest of pastries, nor the healthiest of snacks or breakfast choices. But somehow none of the gluten-free breakfast bars could quite take the place of an occasional warm and toasty Pop Tart.

Now comes word via our friend Michael Savett at Gluten Free Philly that Glutino is launching a gluten-free toaster pastry. At first they will be sold at Whole Foods and will eventually be carried in other stores, the company says. They are not yet listed on the Glutino website, but are being advertised on the facebook page.

Consumer reaction was pretty quick, with some writing “Yes, finally,” and “Thank you, Jesus.”

“Living gluten free is not always easy, but this helps,” another said.

Some did question what happened to the icing found on some varieties of regular Pop Tarts. The toaster pastries come in two flavors, Apple Cinnamon and Strawberry. They are also dairy and casein free according to Glutino’s facebook page.

Echo Planet was the first company to make a gluten-free toaster pastry, but they were never easy to find. Then the company said demand was so high that online ordering was suspended until inventory could be built up. The Echo Planet website says that was supposed to happen today, but so far you still can’t order the toaster pastries.

With Glutino’s introduction of toaster pastries, it looks like another food can be crossed off that list of things we want but are not so sure we’ll ever see.