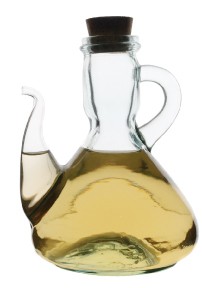 When I was diagnosed with celiac disease nearly 20 years ago, vinegar was a big issue.

Worrying about vinegar complicates the gluten-free diet considerably because vinegar is in a lot of foods. Salad dressings took the brunt of the fear and many of those diagnosed with celiac disease carried packets of “safe” salad dressing around in their pockets or purses, just in case.

A few years after I was diagnosed, I launched Gluten-Free Living as a newsletter and gradually gained a reputation for publishing reliable information. Readers asked us to use our journalism skills to look into the vinegar question. I resisted. It was a powder keg of an issue that I was reluctant to face.

But the requests kept coming, wore down my resistance, and, in late 1999, I decided to take the plunge and begin an investigation of the question, “Does vinegar contain gluten?”

Five minutes after I started, I realized that the question should not have been asked in the first place. Consider this:

Most distilled white vinegar is made from corn, a safe ingredient.

Distillation, one of the oldest scientific processes on earth, successfully removes gluten from the final product.

The only place in the world where vinegar was questioned was the US.

Knowing the hold fear of vinegar had on those who follow a gluten-free diet, I continued my investigation. I spoke with scientists, all of whom said distillation was a reliable process. Donald Kasarda, a respected American grain scientist, who provided scientific- and research-based guidance to American celiacs for many years, said, “There is no scientific evidence for gluten peptides in alcohol or vinegar that I am aware of. I have never encountered a single chemist who thinks there are gluten peptides in distilled alcohol from wheat grain. I have not personally researched this matter because it is such an unlikely possibility, and to prove the absence of gluten peptides that might be present in minute amounts is likely to be a major, costly undertaking and not at all easy.”

Carrying that fear to a logical conclusion is not possible and suggests we need to be concerned about a lot of things we take for granted. It’s a bit like questioning whether an entire cup of water in a single teapot put on the stove to boil does in fact boil or does some minuscule portion of water not reach the boiling point.
Here is what I wrote nine years ago in the article that resulted from all my investigating:

“Of course things go wrong in the real world. But in this case, what is being distilled is most likely not wheat and whatever the original material is, by the time it’s fermented (the first step in distillation) it’s alcohol, not the original material. Although a small percentage of the original material could remain in the alcohol, in the unlikely event that the starting material was wheat, scientists say any gluten peptides that survived fermentation would not survive distillation. Furthermore, they indicate that should something go wrong during distillation, even the wrongest wrong would still produce a product that is safe for celiacs.”

Despite the impossibility, groups of people, to this day, continue to say they “react” to distilled vinegar and conclude it must contain gluten. Never mind that reactions are an imprecise way of determining whether something contains gluten. Never mind that it’s hard to understand how they know the reaction comes from vinegar since they are not consuming straight vinegar, but a product that contains vinegar and other things. Never mind that if we avoided all the foods that give some celiacs a reaction, we would never eat anything. Those who think they react to distilled white vinegar can choose to avoid it, but the problem does not stem from any gluten content.

As it happens, fear of vinegar persisted despite the existence of pertinent research conducted in the late 1980s by J.A. Campbell, PhD, then chairman of the Nutrition Advisory Board for the Canadian Celiac Association. Campbell was interested in determining the effectiveness of distillation in eliminating residual solids from alcoholic beverages. Whatever he found would be even more true for vinegar since vinegar would use a smaller amount of distillate.

Campbell did find a tiny residue but concluded: “To expose a celiac patient to this level of gliadin would require the consumption of at least 20 liters (21.2 quarts) potable spirits a day. The patient would undoubtedly be more at risk from alcohol than from gluten toxicity. When distilled grain alcohol is used in the production of white vinegar, the dilution factor is still greater and the possible concentration of gluten-like substances even less.”

Our original article on vinegar concluded: “Since there seems to be no firm basis for avoiding vinegar, it would be best for all celiacs if the controversy about this product was laid to rest. Then we can get on to more important things and help celiacs feel more confident about their diet and their health.”

The original article was published nine years ago. In my naïveté, I imagined that news about the safety of distilled vinegar would hit the celiac community and cause people across the country to cheer. No more fear of vinegar.

But, alas, that didn’t happen. The national support groups ignored the article, which was well-circulated. One year after Gluten-Free Living published the vinegar article, the American Dietetic Association, which had previously said distilled vinegar was not safe for those who followed a diet should stick to Balsamic, apple cider and wine vinegars.

Part of the reason fear of vinegar persists is the Internet. Information is posted and stays there, right or wrong, year after year. That means you don’t have to search very hard to f ind someone who will tell you distilled vinegar is not safe for those who follow a gluten-free diet.

But the persistence of fear of vinegar is more than that. Misinformation about vinegar is like the Energizer bunny. It keeps going and going and going. While the national support groups clearly work for the good of those who follow a gluten-free diet, getting out reliable information about the safety of distilled vinegar has not been a priority. Why doctors and dietitians got on the “vinegar is not safe” bandwagon given their science background eludes me. Dietitians have mended their ways but you will still read ingredient misinformation from the medical community.

This is definitely my last word on vinegar, which is safe except for malt vinegar. We stand by what we publish.

Ann Whelan is founder and editor/publisher of Gluten-Free Living.