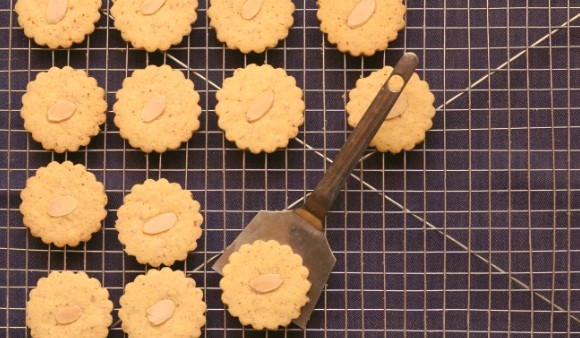 When I first settled in San Francisco,one of the many new foods I came across and loved was fresh, sweet corn on the cob. This sun-loving plant doesn’t thrive in my native rainy Scotland.

I also fell in love with California wines, fresh Dungeness crab and San Francisco’s fabulous crusty sourdough bread. Of course, back then I didn’t know I had celiac disease, so some of my New World discoveries did tend to bite me back. Thankfully, naturally gluten-free corn was not one of them.

Still, I’m one of those lucky people who manage to be in the right place at the right time. I had just spent 18 months traveling around Spain, France and Italy, and now that I had a kitchen again, I went hunting for European cookware. I found what I needed at an unusually elegant kitchenware shop on Sutter Street, not far from the financial ad agency where I toiled over ads for stock offerings.

One food-related chat led to another, and before long the owner asked me if I could possibly design and write a mail-order catalog for the store. I had absolutely no experience in this field but promptly said yes. I continued writing their cookware catalog copy for the next several decades. The company, of course, was Williams-Sonoma.

Chuck Williams was a gifted intuitive cook with a passion for fresh, simple food. (At 98, he doesn’t do much cooking these days, but still appreciates a well-cooked meal.) He was invariably busy in those days but could be coaxed into reminiscing about his former life in Sonoma and the menus he prepared for friends using locally grown and raised ingredients. He always was ahead of the crowd.

One of my favorite stories concerned what he called “Bicycle Corn.” It seems that years ago there was a large field next to the Sonoma high school where an old man with two sons raised corn. You told them how many ears you wanted and one of the sons would jump on his bicycle and race off down the field to pick them for you. It doesn’t get any fresher than that.

The fresh corn we buy today, whether from a farm stand or a supermarket, doesn’t resemble its wild ancestor much. Teosinte (Zea mays) is a species of grass, now threatened or endangered, native to Central America that has short cobs about 5 inches long with a single row of just a few kernels encased in tough hulls.

Ancient farmers in what is now Mexico took the first steps in actually breeding and improving this plant by noticing which ones had the best and biggest kernels (seeds) and planting them for the next season’s harvest.

Many thousands of years later, thanks to human selection, spontaneous plant mutations, and, more recently, genetic engineering, modern corncobs are enormous and have hundreds of tender, sweet kernels in multiple rows. It’s a hugely successful, high- yield grain crop that now sustains millions of people and their livestock around the globe.

About 90 percent of the corn grown in the United States today is now genetically engineered. (The other two leading genetically modified organism (GMO) crops are soybeans and cotton, the seeds of which can be processed to make cooking oil. )

In the name of progress, the majority of the corn-based products you see on American supermarket shelves today — think of corn flakes, cornmeal and cornbread mixes — are made with refined corn flour. However, when genetically engineered or naturally grown corn is refined, the healthful germ, bran and corn oil are removed, leaving just the starchy endosperm. This practice extends product shelf life immeasurably but might not do the same for our longevity.

As certified organic foods have to be GMO-free, it makes a strong case for buying organic or sustainably farmed products (not all small producers can afford the costly certification process) whenever possible.

Pesticide-free organic grains and produce are not only richer in antioxidants and therefore better for your long-term health, but also have far more flavor. Sometimes it’s worth paying a bit extra for these attributes. The proof is not only in the proverbial pudding but also in the tender gluten-free corn pound cake, golden corn muffins and corn flour shortbread cookies.

What’s Gluten-Free at Whole Foods Market? Here are Some of Our Favorites
Share This