Are you ever out to eat, wondering if there’s gluten in those French fries or curious whether a sauce has sneaky traces of gluten in it? A new portable sensor, Nima, allows you to test your food on the go—anytime, anywhere. Instead of having to take a server’s word for it, you now have an extra data point before you take a bite.

Nima detects 20 parts per million of gluten in liquids and solid foods in just a few minutes. You can also share and search test results with people who have similar dietary habits in a Yelp-like community on the Nima iOS app. 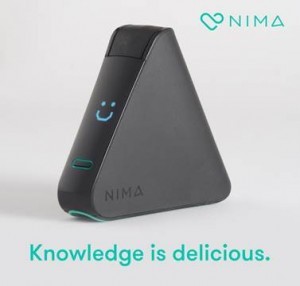 Nima has two components: an electronic sensor and a one-time-use capsule, which contains proprietary chemistry to run the test. First, you take a pea-sized amount of food or liquid and put it into one of the capsules. Screw on the cap, and insert the capsule into the sensor. After pressing start, you’ll wait about two to three minutes. If Nima detects any gluten, it will display a wheat symbol. If Nima shows a smiley face, the sample contains less than 20 parts per million of gluten, the FDA guideline for gluten-free foods.

After testing, Nima syncs with your iPhone via Bluetooth and shares the results with other Nima users across the country in the mobile app, creating a crowdsourced database of gluten-free-friendly foods. You’ll also be able to search for restaurants, see previous test results and find new recommendations nearby.

The technology behind Nima fuses cutting edge chemistry with best-in-class engineering to make an easy-to-use product you can take anywhere, such as to restaurants, to a family member or friend’s house or to a business function.

Nima Starter Kits, which contain the sensor, three one-time-use capsules, a charging cable and a carrying pouch, are sold online for $279. Refill capsules are available in packs of 12 on a discounted subscription basis or as needed. You can subscribe to receive two packs per month, one pack per month or one pack every other month, starting at $59.95.

Shireen Yates and Scott Sundvor founded Nima in 2013 to help people trust their food. Both have dealt with various food allergies and sensitivities and were tired of having anxiety at meal time. Born out of MIT, they founded Nima to focus on enabling people to be their healthiest selves by giving them the power to know what’s in their food. Because knowledge is delicious.