Jenna Drew describes her childhood as a “revolving door” of chronic illness. Whether she was sick with bronchitis, a fever, migraine, stomach ailment or just plain tired, one thing always made her feel better: chicken soup.

Drew, a certified fitness coach and personal chef in New York City, was diagnosed with celiac disease as a young adult. Now one of her go-to foods—both for herself and her clients—is bone broth, a souped-up version of the piping hot cup of comfort that never failed to soothe her as a child.

Bone broth is the nutrient-rich liquid that results from slow-cooking or simmering animal bones in water for up to 24 to 48 hours. A growing number of fans, including chefs, nutritionists and professional athletes, say bone broth contains minerals and protein that promote digestive health, bolster the immune system and strengthen joints, among other benefits. It’s also naturally gluten free.

As cold and flu season approaches, Drew isn’t the only believer in bone broth’s ability to heal. Melinda Dennis, R.D., nutrition coordinator of the Celiac Center, Beth Israel Deaconess Medical Center, Boston, features bone broth prominently at her Delete the Wheat gluten-free wellness retreats. Consuming bone broth is a nourishing way to offer a nutrient-packed food source to the small intestine and the body, she says.

“Bone broth offers many minerals—calcium, phosphorus, magnesium, silicon and sulfur and trace minerals in a way the body can easily use,” Dennis says. “It is also high in glycine, a protein, which is very soothing to the brain.”

Home cooks can assemble bone broth quickly in a slow cooker with just a few basic ingredients: the animal carcass, water, vegetables and seasonings. The broth can serve as a base for soups, stews and gravies, but Drew and many other broth believers sip steaming mugs unadorned, as a meal, snack or a.m. eye-opener.

Bone broth has been called “the new coffee” by Epicurious.com. Restaurants in larger metropolitan areas sell the hearty hot beverage to go, much like a standard cup of Joe. Fans who line up at Brodo’s New York City takeout window pay up to $9 for a cup of bone broth, which the restaurant bills as “the world’s first comfort food.” Brodo notes that all of its broths are gluten free. Other companies, including The Brothery in California—the lucky owner of the domain name bonebroth.com—deliver bone broth straight to regular customers’ doors. 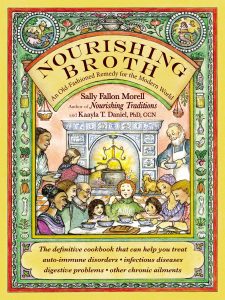 Kaayla T. Daniel, co-author of Nourishing Broth: An Old-Fashioned Remedy for the Modern World, says bone broth isn’t just a fad. Daniel, who has a doctorate in nutritional sciences and certification from the International and American Associations of Clinical Nutritionists, says people all over the world have used similar techniques and ingredients to make broth literally since the Stone Age. The use of soups and “meat teas” for health and healing also is universal, she says, with historical figures from Hippocrates to Florence Nightingale espousing broth’s healing powers.

“The news media is calling broth ‘the new kale’ and ‘the new juice,’ but…if it’s a fad, it’s the oldest ‘fad’ ever,” Daniel says. “[Broth] went out of fashion for a while, with the advent of processed, packaged and fast foods. [But] it’s always been valued by gourmet cooks. Julia Child, for example, always kept her stockpot going.”

Now broth is back, in a big way. Daniel chalks up bone broth’s current moment in the sun to the “real food,” “whole food” and “slow food” movements, as well as “nose-to-tail eating,” popularized by Fergus Henderson in London.  Bone broth is a staple of the popular Paleo diet, whose creators consider it a “nutrient-rich superfood.”

“People who go gluten free because of celiac disease or gluten sensitivity are almost always in need of gut healing,” Daniel says. “I can’t think of any food more healing to the gut than old-fashioned bone broth.”

Depending on the circumstances, Dennis says she might recommend that people with celiac disease start with a few tablespoons of bone broth, increasing as tolerated to several cups per day. Like anything else, bone broth is best consumed in moderation, she adds.

“When one of my patients is ill—losing weight, not tolerating many foods and finding it difficult to stomach solid foods in general—I may suggest the short-term use of bone broth…to help them over the rough patch,” Dennis says. “In some cases, it is one of the few foods someone can tolerate, and they build up their diet from there with well-cooked rice, vegetables and small amounts of protein.”

All it’s cooked up to be?

Amy Jones, R.D., who chairs the Dietitians in Gluten Intolerance Diseases practice group for the Academy of Nutrition and Dietetics, generally takes a more cautious approach to bone broth.

“There’s no hard evidence that it helps leaky gut or inflammation,” she says. “There just isn’t a lot of research behind it.”

A moderate amount of bone broth is probably safe, she says, but she’s uncomfortable recommending it to clients without more information on the nutritional benefits and lead content.

On the positive side, Jones says athletes in particular may benefit from the extra hydration, protein and small amount of sodium in bone broth. It’s also a nutritionally superior choice when compared to a high-calorie beverage, such as a full-fat latte. Making bone broth brings people back into the kitchen, which is always a good thing, she says, and adding vegetables can pump up its nutritional value.

“Bone broth is certainly a gluten-free choice, and we always want more of those,” Jones says. “If a person with celiac disease asked me, I would say it’s probably not going to hurt you. …But don’t expect it to cure your immune system or heal your knee pain.”

Make it yourself. Store-bought broths usually contain higher amounts of sodium and other added ingredients. Plus, most people agree that homemade broth tastes better.

Follow a recipe. Making bone broth takes hours, so don’t wing it. To reap the most nutritional benefits, be sure to do it right.

Go natural. For the “cleanest” broth, start with organic vegetables and meat and bones from animals that are grass-fed and raised without antibiotics and hormones.

Take a hands-off approach. Whip up a batch of bone broth with a slow cooker. Just add a few basic ingredients, turn it on and you’re done.

Skim, strain and chill. Skim off the impurities that rise to the surface after the broth boils. Strain the finished broth, chill and remove excess fat from the top.

Think ahead. Save time by making one big batch of bone broth. Freeze small portions in ice-cube trays for later use.

Use the right proportions. If your broth lacks flavor, you may have added too few bones and too much water.