Gluten-free consumers have gotten used to a growing variety of pastas, made from corn, rice, quinoa, chickpeas or a combination of products, some from mainstream pasta makers.

But who would have predicted that pasta made from vegetables would become the hot new trend and fit so nicely in the gluten-free diet? Thanks to a few ingenious kitchen tools everything from zucchini to carrots and beets is being turned into a new kind of noodle.

Noodles made out of vegetables are often called spiralized vegetables because of the way they are made. When zucchini is used, the end result is referred to as zoodles. This healthy new kind of pasta is popping up in recipes all over the Internet, from Instagram to Facebook and Twitter.

A number of companies offer products to turn produce into pasta, but they come in two basic types—a simpler hourglass-shaped spiralizer or a spiralizer with a crank and several blades.

If you’re looking to save storage space and like simpler kitchen tools, a julienne vegetable peeler  such as the Precision Kitchenware tool for about $9 at Amazon.com, creates thin vegetable sticks that can also be used as pasta.

In addition to being fun to make, spiralized vegetables have a nutritional advantage over most pasta. “The nutrition benefits of any noodles made out of vegetables will be the same as a steamed or cooked version of the vegetable,” says Lauren Slayton, a register dietitian who is director of Foodtrainers in New York City.

Greta Breskin, a registered dietitian based in North Carolina, says it’s important to pick vegetables that pack a strong nutrition punch. “I recommend using a variety of bright-colored vegetables like beets, carrots and purple potatoes to increase the variety of phytonutrients on your plate,” says Breskin.

Plus, they’re an excellent way to get kids eating veggies. “Letting kids help out with transforming vegetables into noodles can be an effective way to expose them to new foods. If they are involved with making it, they are more likely to try it,” Breskin says. 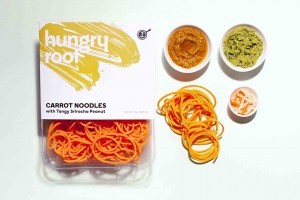 If this new kind of pasta seems intriguing but sounds like too much work, consider Hungryroot, a newly launched gluten-free, vegetable-centric company that offers vegetable noodles with accompanying sauces that can be prepared in 7 minutes.

Chef Franklin Becker of the gluten-free restaurants The Little Beet and The Little Beet Table in New York is a partner in Hungryroot. He says inspiration for the company came from a desire to “combine vegetables with our need for comfort food.”  The company currently ships throughout the Northeast, Mid-Atlantic and most of the Midwest and Southern states.