The chances of finding a gluten-free beer other than Redbridge at your favorite restaurant, neighborhood beer shop or big-league ballpark have grown in recent years thanks to the boom in craft breweries. And there’s no end in sight: The global gluten-free beer market is expected to increase at a compound annual rate of 17 percent between 2018 and 2022, according to a recent industry report.

Other than Anheuser-Busch InBev’s widely available Redbridge, which has been sold since 2006, other gluten-free efforts by larger beer companies, such as Coors Peak and Dogfish Head’s Tweason’ale, have been discontinued. Instead, the gluten-free beer market primarily is supported by microbreweries, which produce fewer than 15,000 barrels a year, and even smaller nanobreweries, which manufacture several thousand or fewer barrels annually. (See sidebar for a list of bottled and canned gluten-free beers sold throughout the United States and Canada.)

From the Pacific Northwest 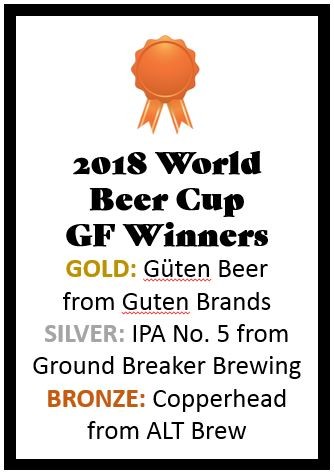 Americans comprise the largest group of gluten-free beer drinkers in the world—a 45 percent share, reports market research firm Technavio. Much of the gluten-free beer production in the United States is concentrated west of the Mississippi; Oregon alone is the home to four gluten-free breweries. The oldest and most acclaimed of the group is Portland’s Ground Breaker Brewing, whose beers are certified gluten free by the Gluten-Free Certification Organization. Opened in 2011 as the first dedicated gluten-free brewery in the country, Ground Breaker has medaled at the prestigious Great American Beer Festival every year since 2012, with its Dark Ale winning gold in the gluten-free beer category in 2014, 2016 and 2017. Dark Ale is one of Ground Breaker’s four year-round beers, though the brewery is also known for seasonal and experimental varieties, such as Imperial Darkness and Cascadian Dark Ale. (Many are available for online ordering.) Ground Breaker’s beers are distinctive for the use of locally grown roasted chestnuts and lentils. The brewery also runs an adjacent all-gluten-free gastropub, offering the likes of pork belly tacos, pizzas, sandwiches and brownie sundaes.

An hour southwest of Portland is Evasion Brewing, whose core bottled beers include an IPA, stout and blonde ale and a seasonal Belgian dark strong ale brewed for autumn. Other styles, like Peanut Butter Vibes stout and Commit to the Funk farmhouse ale, are served at Evasion’s taproom in McMinnville. Evasion’s offerings are not made with sorghum—a mainstay of many gluten-free beers—but, instead, with rice and millet.

Oregon isn’t the only state in the Pacific Northwest that’s home to a gluten-free brewery. In Seattle, Ghostfish Brewing Company produces some of the most unconventional beers around—the limited-release Ghost Pepper Saison and Gosefish Hibiscus-Cranberry Gose, for example. Ghostfish’s flagship craft beers include traditional and grapefruit IPAs, an American pale ale and a Belgian white ale. Its Meteor Shower Blonde Ale, brewed with malted millet, California-grown brown rice and Noble German Perle hops (adding a light bitterness and floral aroma), won a silver medal at last year’s Great American Beer Festival. Like Ground Breaker, Ghostfish also has a taproom and entirely gluten-free gastropub in its hometown, though its beers are also sold in five other states, British Columbia and online.

Other out-of-the-ordinary gluten-free beers come from Burning Brothers Brewing, based in St. Paul, Minnesota. The dedicated brewery, which distributes throughout its home state as well as in Wisconsin and North Dakota, gives the summer seasonal category an unusual twist with its “PARCHED” Lime Shandy and counts a roasted coffee ale among its year-round beers.

Brewing in smaller batches allows dedicated gluten-free breweries like ALT Brew of Madison, Wisconsin, the flexibility to offer a more diverse range of beer styles. ALT Brew bottles a Kölsch, a light top-fermented German beer that’s a rarity in the gluten-free beer space, as well as several ales year-round. (The brewery’s winter seasonal Ravenswood Imperial Brown Ale was among the best-tasting beers sampled for this story.)

In Golden, Colorado, Karen Hertz started Holidaily Brewing Company in 2016 in the shadow of the mighty Coors after discovering she was gluten intolerant. Holidaily, which has a taproom and sells its beer in restaurants and stores throughout the Centennial State, started out canning a blonde ale and IPA but has since branched out with varieties such as the Blue Moon-like Buckwit Belgian wit-style ale.

While most of the gluten-free beers in the U.S. are made domestically, a few imported brands have made inroads. Glutenberg, which was founded in Montreal in 2010, distributes its beers in 24 states as well as all of Canada and even parts of Europe. The brewery has won five medals at the biennial World Beer Cup, including top honors in the gluten-free beer category for its IPA in 2016. Glutenberg’s newest styles are a year-round witbier and a seasonal stout, which was popular among our taste-testing panel.

Another World Beer Cup winner is Green’s, whose gluten-free beers are brewed in Belgium. In 2004, the Enterprise Dry-Hopped Lager and Endeavour Dubbel Ale were awarded gold and silver, respectively. Green’s uses a combination of millet, sorghum, buckwheat and rice in all five of its beers.

*Top pick of the tasting team

Want information and tips for eating out gluten free? Visit our Eating Out section!