The holidays are just around the corner, but happily being gluten free doesn’t have to mean going without traditional holiday desserts.

Old-world classics like fruit-studded stollen or a decadent chocolate Bûche de Noël can be just as delicious — if not more so — without using wheat flour. And they offer more than glorious flavors and textures. These gluten-free Christmas desserts can bestow a comforting sense of continuity, too. 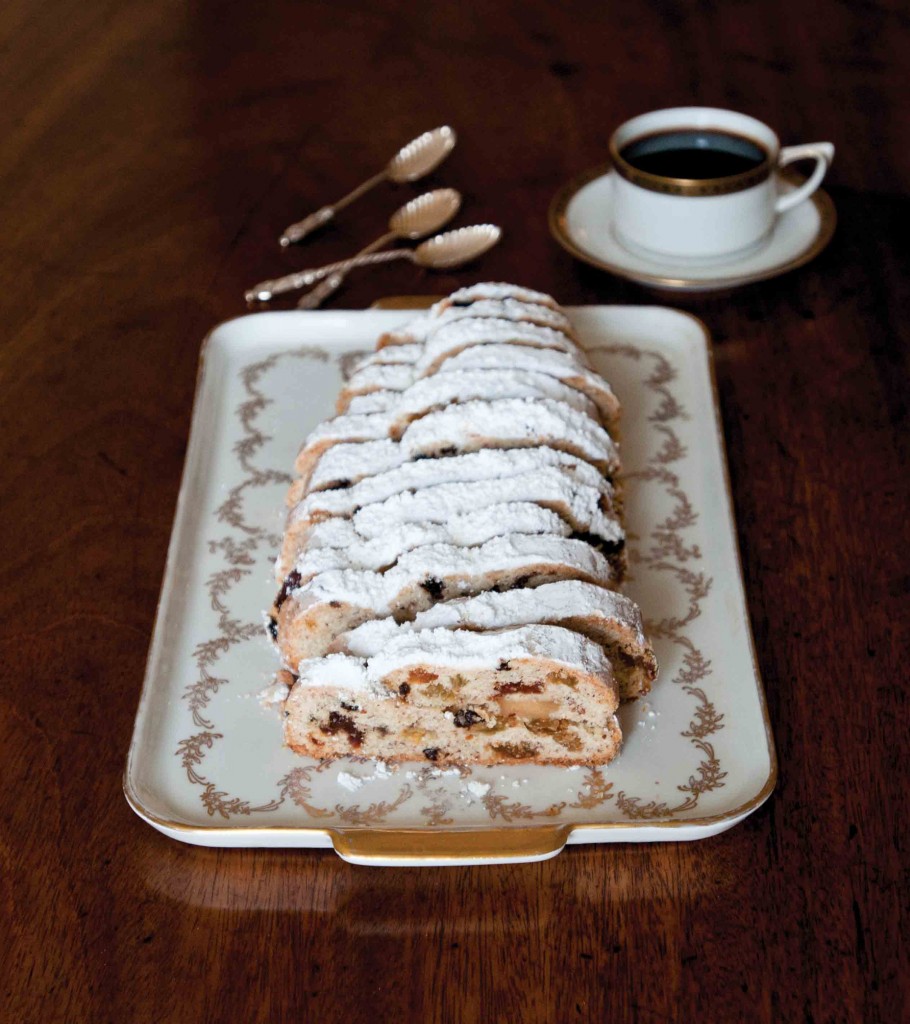 Stollen was first made in the German city of Dresden in the 1400s. In that devoutly religious age, Christians made stollen in a very plain oval loaf shaped to represent the baby Jesus in swaddling clothes. No butter or other rich ingredients could be used during Advent, the period leading up to Christmas, because it was a time of fasting. Consequently, stollen was served for its religious significance, not its flavor.

Over the centuries, stollen ingredients gradually became more numerous and delicious. Today, it’s a buttery confection rich with dried and candied fruits, nuts and marzipan, cloaked in a snowfall of confectioners’ sugar. When I baked the gluten-free stollen for this story, photographer Michael Grassia sampled a slice and said, “Wow, this is the taste of the holidays.” 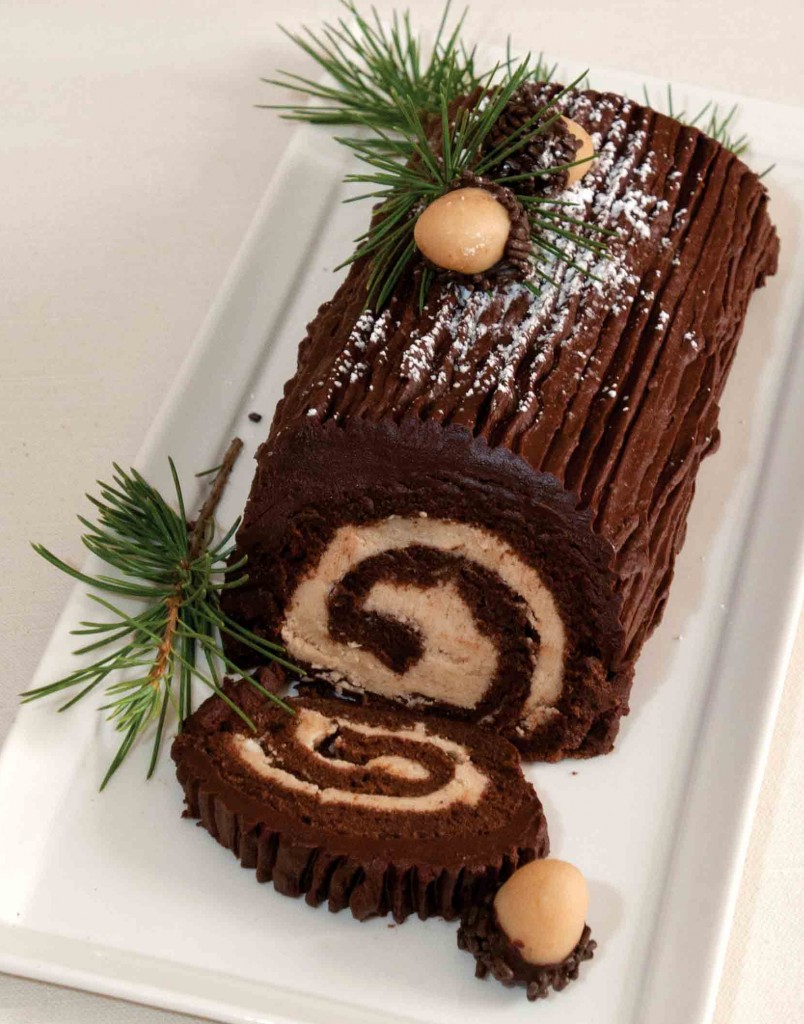 The origins of Bûche de Noël, or Yule Log Cake, date back about three millennia, to Europe’s Iron Age. At the end of the year, pagan people would gather to celebrate the winter solstice, which marked the end of winter and the start of longer days. To welcome the new year, a sacred log was ceremoniously garnished with greenery and burned in the fireplace.

The logs of old are now represented by a rolled cake filled with butter cream, covered with chocolate “bark” and decorated with woodsy trimmings like crisp meringue mushrooms or acorns fashioned from marzipan and chocolate sprinkles.

Marzipan seems to have originated in the Middle East and was possibly introduced into Europe by returning Crusaders in the 13th century. Basically a mixture of finely ground almonds and sugar, which was scarce and costly at that time, this delicious paste lends itself to being modeled into shapes that have been delighting people ever since.

I was intrigued when I came across an 18th-century English recipe for a marzipan hedgehog in The Art of Cookery Made Plain & Easy by Hannah Glasse, who was the Julia Child of her day. Her recipe was labor intensive to say the least — the reader was instructed to start by pounding 2 pounds of almonds to a paste using a mortar and pestle —  but it’s wonderfully easy to make today. All you need is ready-made marzipan, pre-slivered blanched almonds and a couple of whole cloves for the eyes.

At first marzipan appeared only on the tables of royalty and the very wealthy, but today it can be found at specialty food stores and most large supermarkets. Just be sure to check the ingredients; some brands contain wheat starch.

Marzipan also stars in a popular German confection called Kartoffeln: tiny irregular balls dusted with cocoa that look amazingly like real baby potatoes. I use them as decorations for a fabulous German almond torte with a secret ingredient that lends an extra moist texture: a Russet potato.

Filled with a luscious almond-flavored butter cream and cloaked in dark chocolate, this cake is ideal for any time a special occasion calls for a very special cake. 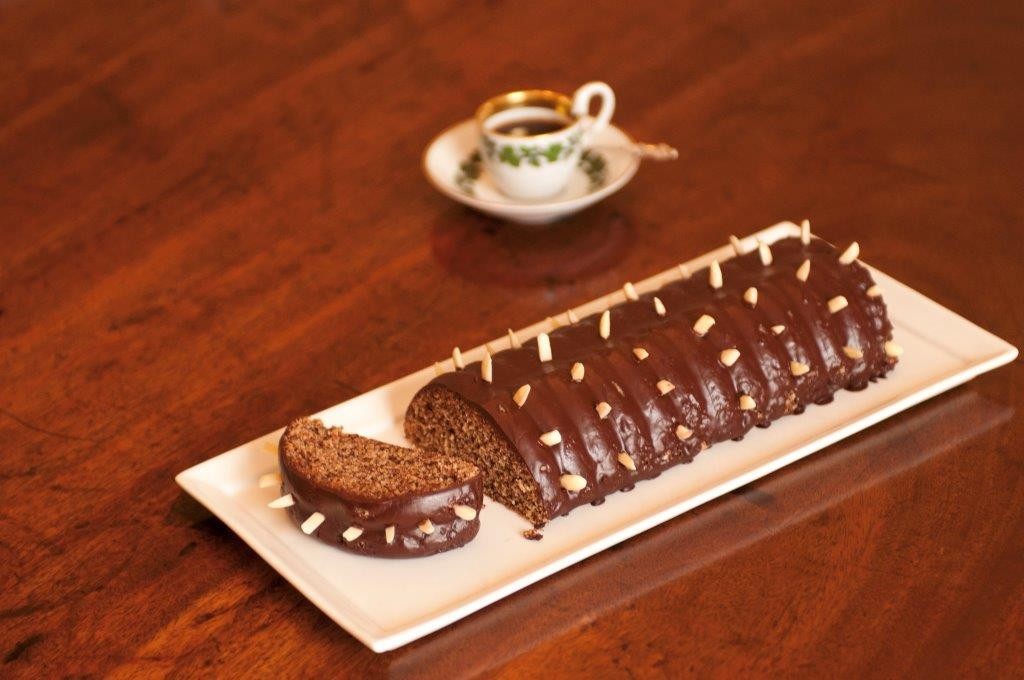 Extravagant desserts are essential to year-end celebrations around the world. And perhaps nowhere in the world are they more delicious than in Vienna, home to Strauss waltzes, luxurious coffee shops and elegant cakes and pastries.

The vast Austrian-Hungarian Empire once ruled by the Hapsburgs is long gone, but Viennese cuisine survives. And as it happens, the Viennese have a particular fondness for flourless tortes, which are naturally gluten free.

One of my all-time favorites is rehrücken, a fanciful almond flour and grated chocolate creation made in a special ribbed mold. Coated with dark chocolate and decorated with slivered almonds, it’s supposed to resemble a roasted saddle, or double loin, of venison. The almond spikes mimic the tiny strips of salt pork inserted into lean deer meat to baste it during cooking.

As with cocoa-dusted chocolate truffles, which mimic wild truffles that sometimes grow underground near oak trees, both treats are culinary jokes. Amusement aside, this elegant chocolate cake looks festive on the holiday table and tastes even better.

Recipes for rehrücken abound on the Internet. However, they’re often altered and rarely attributed to the obvious source: a cookbook written by Viennese-born Lilly Joss Reich. First published here in 1970, The Viennese Pastry Cookbook is a delight.

This rehrücken recipe that follows is true to the Reich original but is cut in half. However, I did add a tablespoon of potato starch to ensure an even rise because all-nut-flour cakes have a tendency to sink in the middle.

Cheesecakes are also popular in Vienna. These cheesecake recipes are easier to make and possibly more familiar than the traditional Viennese variety. This simple recipe doesn’t even require baking: An ethereal orange-flavored cream cheese filling nests in thin chocolate cups and simply gets refrigerated. For edible luxury, it’s hard to top these. 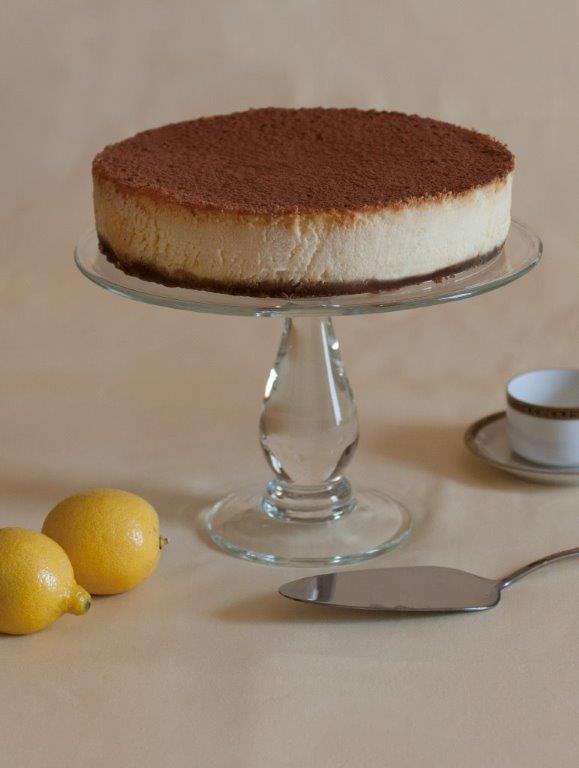 Finally, this elegant full-size cheesecake has a gluten-free graham cracker base with a light but lovely lemon-ricotta topping. Exceptionally airy and luscious, this ricotta cheesecake makes a graceful ending for an extra-special dinner.

Family and friends will be delighted if you make all six during the holiday season. It is, after all, a time for feasting.

Gluten-Free Living Food Editor Jackie Mallorca has more than a dozen cookbooks to her credit. Her latest titles include The Wheat-Free Cook and Gluten-Free Italian.