Boston has been the site of many revolutions. From the one that made the United States an independent nation to the one that got our nation’s industry humming, the City of Champions has been the hub of many major movements.

Nowhere is this more true than in the food industry, where the “home of the bean and the cod” has also become the home of the chocolate chip cookie, the Parker House roll, Boston cream pie, clam chowder and of course, Dunkin’. As MA is also the world’s leader in per capita consumption of ice cream, it may be no surprise that some of the best ice cream toppings (which just so happen to be gluten free!) come from here. What may be a surprise, however, is who is producing them. 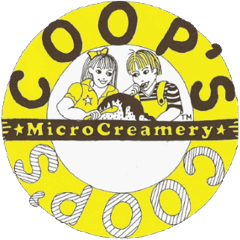 Though he started his career as an engineer, Marc “Coop” Cooper moved into electronics production management and then hospital administration before he decided to take off his white collar, put on a white apron, and dig into the world he truly loved — ice cream! Learning the ropes from local legend Steve Herrell — the man behind both Steve’s and Herrell’s ice cream — Cooper opened a few of his own stores in 1984. He immediately developed a following that resulted in being named the best in Boston a record 12 times and also being asked to produce over 2 million ice cream bon bons for another MA food magnate — Legal Sea Foods’ CEO Roger Berkowitz.

Though he eventually parted ways with Herrell’s, Cooper was not ready to throw in the chocolate-soaked towel completely. Since 2008, he has been producing his own line of gluten-free, preservative-free, GMO-free and corn syrup-free toppings under the banner of Coop’s MicroCreamery.

While he credits his wife with a great deal of support, Cooper has seen fit to find other strong women to support his ice cream topping habits.

Fortunately he did not have to look far from his South End apartment to find a team of talented women who were eager to contribute.

Just a few blocks from Cooper’s home is Project Place, a social service agency that provides resources to people who want to find meaningful work and a place to call home.

“First Project Place’s clients complete a full career assessment of their job experience, create a resume, and learn interviewing skills. Each client works with a case manager to create a plan tailored to the student’s individual needs. We offer computer training and a variety of industry-recognized certificates like Serve Safe, customer service, and OSHA. If our clients are interested in working in one of our social enterprises, they participate in an enterprise-specific internship. Then they are hired by one of our enterprises and gain transitional employment that helps them secure on-the-job experience, gain additional skills, and strengthen their resume. Our clients use their new skills and experience to secure permanent employment. Our case managers support our clients throughout their time at Project Place and for two years after they graduate,” explains Director of Finance and Social Enterprises Alan Lehman.

Among Project Place’s many ingenious initiatives is Working Opportunities for Women (WOW), which focuses on supporting women in the Greater Boston area. In addition to providing shelter and support, WOW offers work training and strives to transition its members from public assistance to financial independence. “WOW hires and trains women experiencing homelessness and joblessness,” Lehman explains, noting that the program is “focused on helping single mothers.”

When WOW launched in 2016, the administrators at Project Place began to seek partners who could train the women and provide them with meaningful work opportunities. As soon as they found Cooper, they knew it would be a sweet pairing!

“About four years ago,” Cooper recalls, “I approached a friend and neighbor who founded Haley House — a 50+-year-old Boston nonprofit that trains disadvantaged and operated two restaurants. They had a kitchen that supplied their and other restaurants. We explored the idea that I would license them to make and distribute Coop’s MicroCreamery [products].”

Despite their valiant efforts, however, the Haley House kitchen could not accommodate all of Cooper’s creations. Fortunately, the folks at Haley had friends in the neighborhood, including Project Place Executive Director Suzanne Kenney. After a brief meeting with the Project Place team, Cooper realized that it was a match made in hot fudge heaven!

“Project Place hires and trains women who…have no or poor work experience,” Cooper explains, citing these among the many benefits of his production partner. “There is constant training of new women who thus receive hands-on work experience.”

In addition to being advantageous to WOW, the agreement works well for Cooper as well.

“I reimburse Project Place for labor costs,” Cooper notes, “[but] I am freed from hiring/firing and supervision, allowing me to concentrate on the facility, testing and buying ingredients, selling products and developing new products.”

Speaking of new products, in addition to his original hot fudge, Coop’s now offers also a vegan variety, and a salted caramel sauce — all three of which have won coveted sofi™ awards (essentially the Oscars of the food industry) from the Specialty Food Association. The latest additions to the family are a cold brew mocha sauce and a non-dairy hot chocolate mix called Cocoa Felice that is named after Marc’s wife.

When asked why he got into the toppings business, Cooper cites the obvious — New England’s changeable weather. As ice cream is not as popular when it can be stored outside, Cooper wanted to offer products that would allow his employees a more steady work cycle and income. By partnering with Project Place, Cooper has not only been able to expand his business but to also expand the horizons for women and families in need.

“Project Place is focused on increasing the skills we teach and serving more people,” Lehman maintains. “Increasing sales of Coop’s products will enable us to train more women in production, inventory management, sales, customer service, shipping and computer skills…. Our relationship is truly a win-win!”

Matt Robinson has been writing, editing, and teaching writing for over 20 years and has published pieces on a wide range of topics. Read some of his writing at www.TheRobinsonReporter.com. He also talks about food (gluten-free and otherwise) on WBZ radio. Listen to some of his conversations at www.Matts-Meals.com).