From the most bizarre foods to the very basic–and if the food is on a stick that’s even better–you can find everything at the Minnesota State Fair.

I remember attending the fair 14 years ago with my 2-year-old daughter Emma, who was newly diagnosed with celiac disease. Except for the corn on the cob at the Corn Roast, there was nothing I  dared feed her. As fair-goers know, almost everything is battered and deep fried.

But the gluten-free scene has changed drastically, starting about 10 years ago. “Gluten free has certainly grown within the fair,” says Dennis Larson, licensed administration manager at the Minnesota State Fair. Part of his job is to oversee the food and beverages for the 12 days of the fair., which concluded on Labor Day. His daughter also has celiac disease. 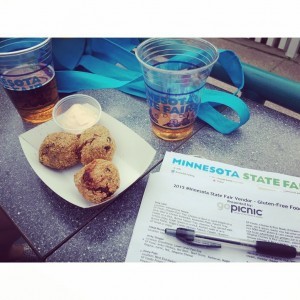 “The first few years it was a learning curve for vendors. They learned being gluten   free isn’t as simple as taking the bun off a burger,” Larson says. Once the fair organizers started keeping a list of gluten-free options, they also started scrutinizing ingredients and preparation. The first year there were only a few vendors. At the 2015 fair, it grew to 48; the most in Minnesota State Fair history.

Each year creation of the list begins with a mass mailing to roughly 250 food vendors, who then detail the ingredients they’ll use and the steps in the preparation process. To be safe, fair-goers are advised to still ask the gluten-free questions they would ask at any restaurant to ensure they are comfortable eating the food. But the list is a great  starting place.

Sampling the Gluten-free Food
Sarah Nielsen has celiac disease and grew up in Minnesota, but now lives just outside Milwaukee, Wisconsin. She says the gluten-free food list was one of the reasons she came to the fair this year.

“My uncle performed with his band most of the day…I would have been there regardless. But the idea of pages of gluten-free fair food was enticing and helped make the decision [to come] an easy one,” Nielsen says.

Items on the list included Falafel on a Stick, Potato Skins with Cheese and Bacon, Maple Glazed Bacon on a Stick, Bee Nice Blueberry Chipotle Swe 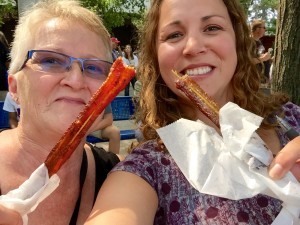 Falafel on a Stick was among Nielsen’s favorites. She says this was a treat, compared to when she came  before the gluten-free list was available.

“I have [been to the fair before], but it wasn’t pretty. It was early in my diagnosis. I think I ended up with frozen grapes,” she says.

State Fair Vendors
Vendors are buying into the gluten-free idea, and the Blueberry Chipotle Sweet Corn Muffin made by the Minnesota Farmer’s Union was a hot new item. Writers from Minneapolis/St. Paul Magazine told readers to “Get It” in an article that summarized and critiqued the new 2015 fair foods.I thought it was very moist and tasty. And if you like that extra chipotle kick, you’ll really be a fan.

Some vendors made changes to create a better gluten-free environment at the fair. This year, French Meadow Bakery and Café created a gluten-free sandwich section, complete 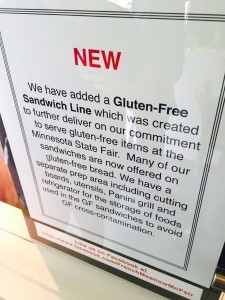 with separate area, ingredients, utensils and a Panini press. Others made ingredient changes to reduce the chance of cross-contamination mistakes. Sonny’s Gluten-free Beer-battered Brat, which is deep fried in a dedicated fryer, was back for a second year

The success of the gluten-free list is also creating awareness of other food allergens. Larson says he got questions about why there aren’t dairy-free, peanut-free or sugar-free lists. He says the fair is open to adding these lists if someone is willing to do the legwork, as was the case with the gluten-free list.

The Minnesota State Fair wrapped up on Labor Day, but before you know it fair will be here again. So if you want to check out the gluten-free fair food in 2016, just reserve some travel time the 12 days before Labor Day.

Amy Leger is the family editor of Gluten-Free Living. This is her second year organizing the Gluten-Free Awareness booth and creating the gluten-free food list at the Minnesota State Fair.