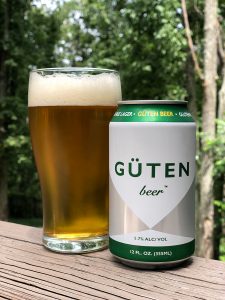 In less than a year in business, Güten Beer has taken the gluten-free beer industry by storm after winning top honors in its first-ever World Beer Cup in May at Music City Center in Nashville, Tennessee. The veteran-owned and -operated company uses 100 percent gluten-free ingredients to create a complex and rich flavored lager that is light and refreshing.

It took Güten Beer years to perfect the recipe for its full-bodied lager and succeed where other companies, despite being in business for years, have failed. How did the company do it? We sat down with Chris Schneider, one of the managing members of Güten Brands LLC, to learn more about this award-winning brand.

Gluten-Free Living: What is the inspiration behind this world-class beer?

Chris Schneider: The inspiration came from founder Todd Ehrlich, who is a very successful entrepreneur with multiple businesses. He founded the recovery drink Kill Cliff, which is also gluten free, and Güten Brands LLC, owner of Güten Beer. He thought it would be cool to start a beer company that produced gluten-free—not gluten-removed—beer that tasted amazingly refreshing.

GFL: Did the World Beer Cup win come as a shock? How many other gluten-free beers were you up against?

CS: I would say the actual award came to us not as a shock but more of an awakening that we do in fact have an amazing beer. We all knew through the trial process that once we dialed in the right formula, we had an amazing gluten-free beer on our hands. There were, I believe, 28 entries from around the world in our category. We were going up against others who have been doing this for years, and it was a great feeling to learn that our beer won gold having been in the market for less than seven months.

GFL: What ingredients are used?

CS: The main flavor profile you or anyone is tasting are the actual base ingredients that we use in the brewing process, which are all 100 percent gluten-free grains. We use millet, buckwheat and sorghum in its unique proprietary formula to dial in the flavor. We aren’t starting with grains that contain gluten then reducing the amount of gluten traces in our final product.

GFL: Why a lager and not an ale or an IPA?

CS: We at Güten Brands LLC set out to create a beer that was light, easy to drink and something that was cooler/fridge/party ready.

GFL: Güten Beer is made by Sleeping Giant Brewing Company in the Rocky Mountains, but distributed only in Georgia—why?

CS: We established our company in Georgia and wanted to bring our product to our backyard after our first production run. We brew through a contract brewery that was specifically capable to handle our needs of producing a 100 percent gluten-free beer.

GFL: When will you expand beyond Georgia?

CS: Since we won the gold award for best gluten-free beer in the world, we are taking a hard look at expanding our operations and distribution. The exposure is great, and it’s awesome to see where this brand can and will go, but we will need to ensure we take the necessary steps to best grow the brand and the business.

GFL: Are there any new flavors on the way?

CS: We are looking to grow Güten Beer’s lineup moving forward but don’t have any details to share at this point.

GFL: The beer is currently only available in cans. Are you considering kegs for serving in bars and restaurants?

CS: We have discussed the idea of kegging Güten Beer, which would be sweet! Who knows, that’s part of our short- and long-term plans as we continue to ride this gold award and look to expand the brand.