Find out how our resident gluten-free baking expert adjusts his recipes to cut down on calories and fat.

As the weather begins to turn to warmer, sunnier days, I often get asked about how to make baked goods with fewer kilocalories (k/cal) or less overall fat. Sometimes I prefer to reply by saying, “just eat less, and savor the moment for longer” or “go for a longer walk” or, as in my case, extra miles on the bicycle. 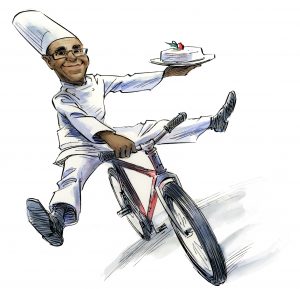 Okay, back to baking. There are various ways to consider reducing the amount of fat and/or k/cals in baked goods. First, realize that the suggested strategies will affect the texture and flavor of the product to some degree. Second, do not attempt to remove all of the fat! It was included in the recipe for a reason, so keep as much as possible. Third, when using a fat replacer, it is best to replace the fat based on a weight perspective. The more precise you are in the replacement strategy, the easier it is to understand and accept the final results.

Baking involves a fair amount of carbohydrates, especially from sugars, and, of course, fat. As I’ve said to my students, “fat is fat, and that’s that!” It serves a purpose, and unfortunately provides the most kilocalories in what we consume.

Fat replacers are used to replace some of the fat in a formula but not all of it. Some of the most common examples are unsweetened applesauce, apple butter, fat-free Greek-style yogurt, silken tofu, plain-baked or cooked potatoes, or sweet potatoes. Each of these examples is either a carbohydrate or protein, so you’ll be saving at least 5 k/cals per gram versus the fat being replaced. There may be additional savings because these products contain some water, which is, of course, calorie free. Because of the natural water content, use caution when mixing. The main thing to understand is that these examples provide good binding properties within a product and can help the product remain moist and/or softer. Apple butter or applesauce contain a fair amount of natural sugar, which will liquefy in the product during baking.

You more or less have to choose your battles, meaning that you have to decide which part of the recipe is best to replace some fat and which is best to keep the fat. For example, in a cake recipe I would keep all of the fat in the icing/frosting because it’s necessary for texture and taste. I’d replace at least half, if not all of the fat, in the cake batter. Depending on which fat replacer I choose, the cake will still have a tender—if not more tender—texture, but will probably lose some density (I can learn to live with that!). If you have ever purchased a boxed cake or muffin mix, you may have noticed some suggestions for substituting the measured amount of oil with unsweetened applesauce. That’s an example of using a fat replacer.

In a product like pie, that’s difficult. The fat in a pie crust is essential for tenderness, flakiness and flavor. I might change the top crust to a crumb-type topping, for which I would replace no more than half of the fat content. You could also try using a crumb crust on the bottom—or eat the regular pie after a longer bicycle ride!