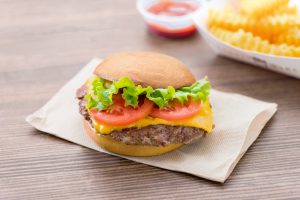 Shake Shack’s newest location has touched down in one of the busiest airports in the U.S., Hartsfield-Jackson International Airport. Stop by Concourse A near Gate A28 to sample the new Rise and Shack! fare plus classic Shack offerings. Even better—everything can be served on one of their soft and delicious gluten-free buns!

The bold move of adding gluten-free burger buns to the menus at all 67 of its U.S. locations (not stadiums or ballparks) in 2016 expanded their ability to serve gluten-free patrons a hearty burger and, now, breakfast sandwiches too!

Bellyrite Foods, Inc., supplies the burger buns to Shake Shack, which are available for a dollar up-charge—a small price to pay for a convenient and scrumptious breakfast sammie with a cup of joe before hopping on a flight. Now, if we could just get them to use gluten-free breadcrumbs on the ‘Shroom Burger.

This is Shake Shack’s third location in Atlanta, with the first opening in Buckhead in 2014 and the second in Perimeter Mall in 2016. And plans are underway to open a fourth location in the Old Fourth Ward in 2019.

Check out our blog for gluten-free news, product roundups, recipe ideas and more!

Learn more about recent headlines and research in This Week in Gluten-Free News!