Red Lobster has announced it will now sell a gluten-free version of its Cheddar Bay Biscuit Mix, so lovers of the cheesy, crumbly biscuits can enjoy them safely at home!

Beginning in August, the mix can be purchased at Walmart stores in the United States.

The biscuits offered at the Red Lobster restaurant will still contain gluten, but fans can now buy a gluten-free version of the mix. Red Lobster has a “food allergy wizard” on its website that allows you to easily find menu options without allergens. 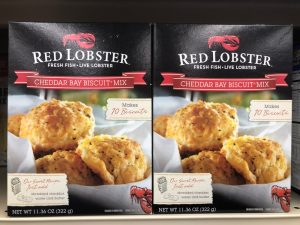 Red Lobster’s iconic Cheddar Bay Biscuits were first introduced in 1992 and, after more than two decades, a gluten-free version will finally be available of these savory biscuits.

Subscribe to our free weekly newsletter to be the first to receive gluten-free news, tips and recipes.

Stay tuned at GlutenFreeLiving.com, where our editors will be conducting a taste test of Red Lobster’s Gluten-Free Cheddar Bay Biscuit Mix soon. When you get your hands on the gluten-free biscuits, send us a picture on Twitter or Instagram and let us know what you think!

Gluten is a name for the proteins found in wheat, rye and barley. According to the Celiac Disease Foundation, gluten helps foods maintain their shape, acting as a glue that holds food together. It is found in many types of foods, even ones that would not be expected.

Many people choose to follow a gluten-free diet because of celiac disease. Celiac disease is an autoimmune disorder in which the body mistakenly reacts to gluten as if it were a poison. When someone with celiac consumes gluten, the immune system reacts by destroying the part of the small intestine that absorbs vital nutrients. This malabsorption can lead to serious illness. Learn more about celiac disease here.