England-based pizza chain Papa Gino’s announced today that they have partnered with Udi’s in order to offer a gluten-free pizza option.

Though the partnership was formally announced today, the company reportedly began serving the pizzas last Monday, February 16th in all Papa Gino’s locations. Like Pizza Hut, Papa Gino’s will use Udi’s Gluten-Free Pizza Crusts, which will be stored in a separate, designated location. The pizzas start at $9.99.

Though Papa Gino’s does not have a designated gluten-free preparation area, the pizzas are built on parchment paper with a protective “pizza screen” to guard against cross-contamination. Employees are trained to put on a new pair of gloves before building a gluten-free pizza.

Though every pizza will be topped with the standard Papa Gino’s tomato sauce, the gluten-free pies will only be topped with sauce from a designated gluten-free container. Each pizza station will also have a color-coded ladle and pizza cutter. 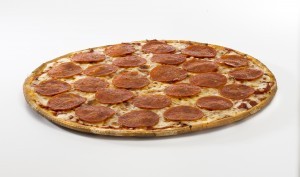 Though the company says most toppings are naturally gluten free, three ingredients on the toppings menu do contain gluten: chicken tenders, meatballs, and mac and cheese.

“We take the needs of the gluten free community seriously and are passionate about providing a high quality gluten free pizza,” said Philip Smith, Director of Culinary for Papa Gino’s, in a press release.