Based on the eating habits of our hunter-gatherer ancestors of the Paleolithic period, the Paleo diet generally includes vegetables, fruits, meat, seafood, nuts and seeds. It does not allow grains, dairy, legumes and certain vegetable oils (such as soy, cottonseed and corn). The diet is based on the idea that the human body may not have adapted over time to process the crops grown through “modern” agriculture.

Although whole grains—including gluten-free whole grains—provide nutritional benefits, some people, both with celiac disease and without, feel better when they avoid whole grains. The Paleo diet presents an alternative for those who continue to deal with symptoms in spite of adopting the gluten-free diet. 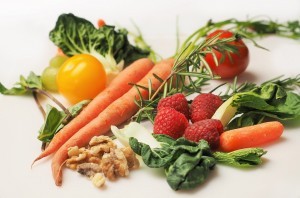 You may have heard about concerns that the Paleo diet lacks in fiber, calcium and vitamin D while containing too much fat. Rest assured, you can take steps to address these issues. Vegetables provide fiber and protein, and almonds along with leafy greens such as broccoli and cooked kale can supply the calcium and vitamin D typically supplied by dairy foods. With its emphasis on healthy lean meats and non-starchy vegetables, the diet differs from other low-carb plans that include too much fat and not enough protein.

Even within the Paleo community, debate rages on  about which foods are Paleo and which are not. In his book The Paleo Diet—considered the bible of Paleo eating—Loren Cordain, Ph.D., labels bacon a food to avoid, but most Paleo chefs use it often in their dishes. Cordain also advises staying away from starchy vegetables such as potatoes, sweet potatoes, yams and tapioca, yet most Paleo followers eat these foods and consider tubers a part of the Paleo diet.

While the name “Paleo diet” indicates a single way of eating, there are actually many versions, and you have to decide whether or not to eat certain foods as you go along. But there’s universal agreement that vegetables, fruits and lean meats are indeed Paleo. Many Paleo followers begin simply with a diet of vegetables and animal protein—the version recommended by Cordain.

As you well know, there’s no one-size-fits-all diet. Everyone has to figure out which foods work best for their body.