This summer, an online pharmacy will become the first to test its prescription medications for gluten before dispensing.

According to a study by MIT and Boston Brigham and Women’s Hospital, 25% of patients with celiac disease and gluten sensitivity reported gluten-related symptoms from medications. Inactive ingredients in medications, like gluten, lactose and food dyes can trigger reactions.

Valisure, an online analytic pharmacy, is committed to transparency about allergens contained in prescription medications.

“You wouldn’t buy food without a nutrition label on it,” said David Light, CEO of Valisure, and he believes the same standards should apply for medicine.

Valisure, co-founded by two scientists, chemically analyzes every batch of drugs that comes through their pharmacy using both FDA technologies and their own testing systems. They already test medications for contamination and dose content, protecting consumers from bad generics, but believe the move to protect Americans who are allergic or sensitive to gluten is an important next step. 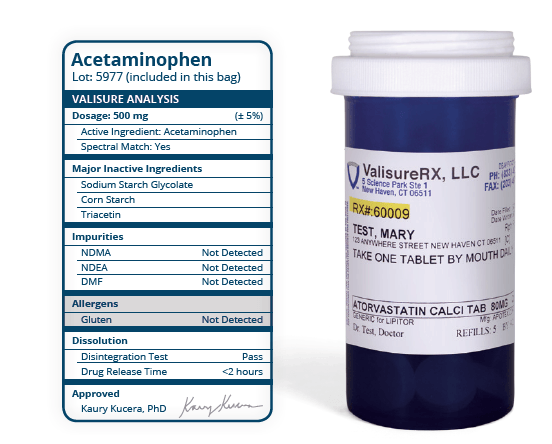 Light said 80 percent of pharmaceuticals are manufactured in India and China, so he believes it’s necessary to test them for potential contamination. “18% of manufacturers have said that their medications contain gluten,” said Light. As many people who avoid gluten know, it can be difficult to find a list of ingredients for prescription medications. Light said many customers told him they are very concerned about their medications containing gluten.

“We are focused on bringing quality, transparency and consistency to consumers,” Light said. The testing Valisure provides adds no additional cost to the consumer.

To test medications, Valisure conducts an inactive ingredient screen. In medications that contain starch, they use ELISA, an analytic technology that tests for food allergens. They test for gliadins, a component of gluten. Products that contain less than 20 ppm of gluten are labeled gluten free.

Light said the goal is to offer certified gluten-free prescription drugs in 2019. He is currently working with the Celiac Disease Foundation to get feedback on creating a service that is effective and useful for the gluten-free community. “This is meant to be a solution and a comfort and to give added transparency in an area where there really isn’t much right now,” he said.

“This has always been on our minds, to get into the space of allergen testing,” Light said. “It really seems that there is a lot of concern around the gluten side and we’re very excited to be the first pharmacy to offer this screening testing and transparency and do something about this problem that we keep hearing more about.”

Valisure expects to have gluten analysis on thousands of products, which should cover “the vast majority of drugs people take,” Light said. The company currently dispenses in 36 states.

Visit valisure.com/gluten for updates and to take a brief survey on how you want to see gluten analysis information.