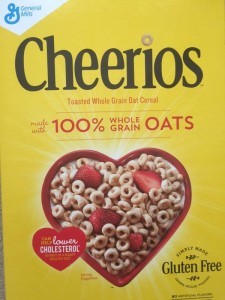 are named as plaintiffs in the complaint, which also seeks to include all other consumers who purchased gluten-free Cheerios that did not meet the U.S. Food and Drug Administration standard for products labeled gluten free.

The complaint maintains the plaintiffs and the class members “have suffered harm and will continue to suffer harm and damages.” Specifically, the complaint notes the “losses related to the purchase of Cheerios labeled as gluten-free.”

In addition to seeking Class certification and a variety of damages, the plaintiffs are asking for an order for General Mills to desist from further distribution, marketing and sales of non-compliant gluten-free Cheerios.

As a standing practice, General Mills does not comment on pending litigation.

“By labeling products ‘gluten-free’ defendants created the misimpression that their products do not contain gluten and are therefore safe for those persons who may be sensitive to gluten to eat,” the lawsuit alleges.

The lawsuit, filed in California Eastern District Court in Sacramento on Oct. 30, relates to the 1.8 million boxes of Cheerios that General Mills recalled nationwide after discovering that they contained more than the 20 parts per million of gluten FDA standard.

Cheerios and Honey Nut Cheerios made at the company’s Lodi, California, plant were exposed to gluten cross-contamination when oat flour used to make them was transported in trucks that had previously been used to transport wheat flour, according to General Mills.

An FDA investigation of the cereal, prompted by consumer reports of illness, found that one sample of Cheerios from the Lodi plant contained more than double the amount of gluten allowed in products labeled gluten free. Tests of 35 other samples of Cheerios from other plants around the country met the FDA standard.

The plaintiffs are seeking compensatory, exemplary, punitive and statutory damages, plus interest, a refund of the purchase price, disgorgement of profits and restitution. The suit maintains General Mills violated the Unfair Business Practices Act, the Unfair Competition Law, the Consumer Legal Remedies Act, Unjust Enrichment and Breech of Express Warranty. The plaintiffs are also seeking a jury trial, and the lawsuit notes they have retained counsel “with substantial experience in prosecuting consumer class actions, including actions involving false advertising.” Cutter Law, P.C., of Sacramento, is representing the plaintiffs.

The complaint maintains that while the exact number of members of the class is unknown, it could be estimated with “reasonable precision” and would be “numerous”. The complaint notes that the recalled boxes “represented approximately 1 percent of Defendants’ production of Cheerios advertised as Gluten Free.”

Controversy has plagued gluten-free Cheerios since their launch because the cereal is made with oats, a grain that is naturally gluten free, but highly likely to be cross-contaminated by gluten from farm to factory. General Mills uses a mechanical process to clean the oats instead of using specialty gluten-free oats, which are grown, handled and processed in a way that helps prevent cross contamination.

As part of the recall, General Mills offered consumers a refund and apologized for the manufacturing error, saying the company was “embarrassed and truly sorry.”