Kate McNamara had just started her dream job when she received a diagnosis of celiac disease. It would have been a challenge for anyone, but McNamara faced an additional complication. She had to figure out how to eat gluten free in West Africa.

McNamara, who lives in New York City, works for a foundation that does charitable investing around the world, and her job requires her to travel to urban and rural areas of West Africa every month or two.

Although she describes celiac disease as “overwhelming for all aspects of your life,” McNamara was determined not to let it interfere with her career.

“[Celiac disease] isn’t a thing that is going to stop me from doing what I’ve dreamt of,” she says. When she accepted her job, she made a point to learn about the local cuisine in the areas she would visit, including whether there were any gluten-free options. 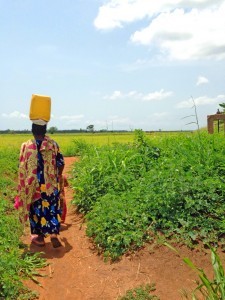 McNamara discovered that wheat flour is not commonly used in West African cooking, good news when you’re gluten free. But Maggi bouillon cubes, which contain wheat, are a recipe staple there, so gluten-free options can be hard to come by. McNamara realized she’d have to bring gluten-free items in her suitcase.

Now seasoned at traveling to West Africa, McNamara has a routine before and during each trip. She packs plenty of food for the 12- to 20-hour flights, which often include getting on multiple planes. Her go-to staples focus on foods high in protein and include StarKist tuna packets, Krave jerky and EPIC protein bars. Over time she has developed relationships with local restaurants and has begun dining out.

“I have restaurants that I got to know, and they will cook me plantains in new oil [that’s not cross-contaminated] and a clean pan, or grill me a piece of fish on foil,” McNamara explains. She makes sure to spell out her exact needs when eating in a restaurant.

“I physically write out a note each time, just to make sure I am safe,” McNamara says. She has high praise for Zane “Zato” Abraw, a server at the Coconut Grove Regency Hotel in Accra, Ghana, who “goes above and beyond to make me safe meals,” she explains.

Like many who are diagnosed with celiac disease, McNamara relies on and credits her support system. “I have amazing family and a great medical team and a really supportive employer,” she says.

McNamara hopes that her story can help others who might think celiac disease limits what they can do. “I think you have to not be afraid, to be willing to hustle and fight each minute of every day to do your dream job,” she says. Then she was off to West Africa again.