These casserole stuffing dishes travel well to the home of a friend or relative.

For a fairly simple dish made mainly with bread, vegetables, seasonings and egg, stuffing causes a lot of grief for gluten-free diners, especially around the holidays.

Those newly diagnosed with celiac disease or gluten intolerance often worry weeks before Thanksgiving about how they’ll cope with having to sacrifice this favorite side dish.

When stuffing is made with wheat-flour bread, as is usually the case, it’s clearly off limits for anyone who is gluten free. And when the stuffing is literally “stuffed” in the turkey, the otherwise gluten-free bird is not safe either.

Many cooks are particularly proud of their family stuffing recipe and stick to time-tested ingredients and methods of making this special dish. That means they are unlikely to embrace a new gluten-free recipe or agree to bake the stuffing in a casserole dish.

Still, there’s been some movement away from baking stuffing inside the turkey in recent years. The push to bake stuffing outside the bird is based on food safety issues as well as concern that cooking the turkey long enough to properly cook the stuffing results in dry turkey meat. But if you are a gluten-free holiday guest, the biggest plus is that stuffing made in a casserole eliminates the worry about cross contamination of the turkey.

When we asked a cross-section of bread companies large and small for their best stuffing recipes, all recommended making the stuffing outside the turkey.

The recipes from bread companies are easy to make because they rely on ready-made bread. As ready-made bread has improved dramatically in the last few years, so has the stuffing made with it.

The recipes from bread companies range from rosemary and thyme stuffing made with Canyon Bakehouse Focaccia to mushroom, green apple, cherry and pecan stuffing from Rudi’s Gluten-Free Bakery.

Canyon Bakehouse is a dedicated gluten-free bakery in Loveland, Colo., that sells its products online and in over 3,500 stores nationwide, including many Whole Foods and Target stores.

Rudi’s produces its bread in Boulder, Colo., and sells it nationwide in major supermarkets and health food stores. The company recently opened a dedicated gluten-free facility, and its products are certified by the Gluten Free Certification Organization. The  stuffing recipe was made in collaboration with Justin Cucci, the chef and owner of Root Down, a Denver restaurant.

Free Bread, a Brooklyn, N.Y.-based company, supplied a recipe using the bakery’s MOXY Flop croutons, named for the millet, oats and flax they contain. Specialty gluten-free oats are used and the croutons, like all the company’s products, are certified gluten free by the Gluten Free Certification Organization.

If you are wondering about the Flop portion of the name, Karen Freer, company founder, says it refers to the fact that the croutons are made from bread that “didn’t look quite as pretty as the other loaves.” Free Bread is served in restaurants throughout New York City and it and the croutons are available online and at select Whole Foods stores.

Leah Foreman of Julian Bakery, located in La Jolla, Calif., focused on a  stuffing recipe that fits the gluten-free and Paleo diets. It contains no grains and uses ingredients that native hunters and gathers ate many years ago. The bread used in the recipe is made from almond flour and other ingredients include sausage, bacon, mushrooms, dates and pecans. It is made in a dedicated gluten-free bakery.

If you are looking for innovative, easy stuffing for this year’s holiday meals, you’re sure to find one here. 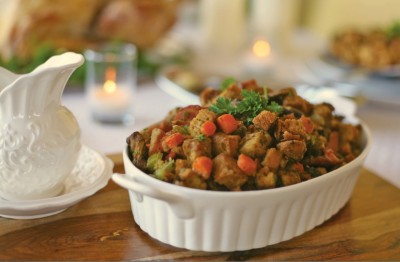 3 . Cut the focaccia into cubes and bake on a baking sheet at 400 degrees F until golden brown, or for approximately 15- 20 minutes to toast. Cool the focaccia cubes before using.

5. Melt 2 tablespoons of butter in a large skillet over medium heat. Add the pancetta and sauté until crisp, about 10 minutes. Remove pancetta and place on a dish lined with a paper towel.

6. Add the remaining butter to same pan over medium heat and add the onions, carrots, celery, garlic and mushrooms. Season to taste with salt and pepper. Sauté until tender about 12 minutes. 7. In large bowl add the sautéed vegetables, parmesan cheese and focaccia cubes. Add the chicken broth to moisten.

8. Beat 2 eggs and add the eggs and pancetta to vegetables, cheese and focaccia. Season with salt and pepper to taste and add the parsley.

9. Mix well to combine all the ingredients.

10. Transfer the stuffing to the baking dish. Bake for approximately 40 minutes at 350 degrees F or until the stuffing is golden brown.

1. In a large mixing bowl toss the mushrooms and shallots, celery, and green apple with the oil and salt. Place the vegetables on a sheet pan and roast for 35 minutes. During the last 10 minutes of cooking, spread the Rudi’s gluten-free bread over the vegetables, return to the oven, and continue cooking.

2. Place vegetables and bread, chicken stock, cherries, pecans, egg, sage, parsley and black pepper in a large bowl. Stir well in order to break up pieces of bread. Use your hands to combine, if necessary. Heat the stuffing in the oven to warm up.

You can also make this recipe using dried porcini mushrooms instead of the seasonal mushrooms. Also replace the chicken stock with vegetable stock.

1. Heat 2 cups of vegetable stock in saucepan to simmer; remove from heat. Place mushrooms in bowl and pour heated broth over them. Cover and allow to sit for 35 minutes.

2. Drain dried mushrooms, reserving 1 cup of liquid only. Chop the mushrooms and place in a large oven proof bowl with the vegetables and bread, reserved stock, cherries, pecans, eggs, sage, parsley and black pepper. Stir well in order to break up pieces of bread. Use your hands to combine, if necessary. Heat the stuffing in the oven to warm up. 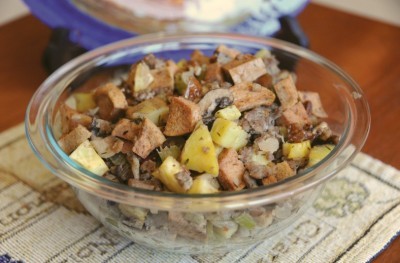 2. While bread and sweet potatoes are baking, place diced bacon in a skillet on medium-high heat and let the fat seep.

3. Once bacon has cooked down, add celery and onions. Let the onions becomes translucent, then add the pork sausage, mushrooms, chicken broth and white wine vinegar. Cook until the pork is just brown/cooked through. Add in sage, thyme and salt and pepper to taste.

5. Switch oven to 375 degrees F and transfer contents from large bowl into a 9- x 13-inch baking dish. Bake for 15-20 minutes, or until the stuffing is lightly browned.

(Note: There is no butter or oil in this recipe.) 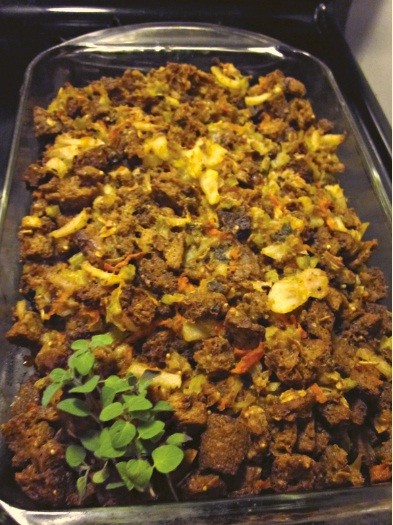 1. In a Dutch oven, melt two sticks of butter.

3. Add the MOXY Flops crouton (all of them — no snacking!) and stir until well coated.

5. Add the beaten egg while stirring constantly. The mixture will begin to thicken.

6. Add the water chestnuts and stir again until all the ingredients are well coated.

7. Let mixture rest for about 10 minutes, then transfer to a baking dish. Bake for 45-55 minutes at 350 degrees. Garnish with parsley.