If you’ve been including Greek yogurt in your gluten-free diet, you might have noticed that it often is not fortified with Vitamin D.

That’s one significant way it differs from regular yogurt. Greek yogurt also has a thicker texture and more protein than other types of yogurt.

Vitamin D is an important nutrient because it contributes to healthy bones, so you might wonder why it’s absent from Greek yogurt, which is gaining in popularity and the amount of shelf space it’s given in supermarket refrigerated cases. 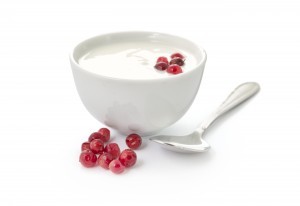 Greek yogurt is often produced in a traditional way that focuses on straightforward ingredients. FAGE, for example, starts with milk that does not contain Vitamin D.

“Our milk is not fortified with anything, including Vitamin D. FAGE Total is made with a family recipe that dates back to 1926; it contains no added sweeteners, thickeners, preservatives, powdered milk, powdered cream or powdered protein,” says Russell Evans, director of marketing for FAGE USA. “Just milk, cream and live active cultures to create all-natural FAGE yogurt.”

Chobani also focuses on producing traditional Greek yogurt. But there is a slight difference between these two brands. Chobani begins production with milk that contains Vitamin D but reduces the amount during processing. The end product contains twice as much protein as regular yogurt and also provides calcium, potassium and other vitamins and minerals.

“Chobani Greek Yogurt is a real food made with only natural, non-GMO [genetically modified] ingredients. Because increasing the Vitamin D content would require the addition of synthetic Vitamin D, we choose not to fortify our products in an effort to provide a nutritious, delicious yogurt consisting of just a few, natural, simple and easily-recognizable ingredients that people can trust,” the company says.

“The big bonus of Greek yogurt is the protein factor. I don’t find it to be the most wonderful calcium and Vitamin D source. And that’s OK. That’s probably not really the intention,” explains Amy Jones, R.D., of Bellefontaine, Ohio.

In fact the best source of Vitamin D is cod liver oil. “Most people are not going to eat cod liver oil,” says Jones.

If you are looking for a brand of Greek yogurt that does fortify with Vitamin D, consider General Mills’ Yoplait. “Unlike some other Greek yogurts, Yoplait Greek, Greek 100, Greek 100 Whips! and Plenti provide an excellent source of Vitamin D,” says Mike Siemienas, General Mills manager of brand media relations. He notes the yogurts provide 20 percent of the daily value of Vitamin D recommended for adults.

But Rachel Begun, R.D., of Boulder, Colorado, says you have to consider the entire nutritional profile of any yogurt.

Greek yogurt raises the same nutritional concerns. “The problem is Greek yogurt has gotten a little bit of a ‘health halo’ where everybody assumes every Greek yogurt is a healthy choice, and it’s just not,” notes Jones. “Unfortunately, a lot of the Greek yogurt makers…have turned these Greek yogurts into more dessert-type yogurts.”

She pointed out that unflavored plain yogurt does not present these worries.