A diploma from the University of Pennsylvania can take people far, but sometimes they do not end up where they planned to be.

After graduating from UPenn, Diana Levy worked for CBS News, then went into the realm of political public relations. After that, Levy tried her talented hand at options trading on the Chicago Board Options Exchange and then went to law school. As is so often the case, parenthood focused her attentions and led her to her current (and potentially most satisfying) venture — the revelation of Undercover Chocolate.

“Once I found myself with three kids in diapers,” Levy recalls, “I became a stay-at-home mom…and ultimately started a small chocolate business.”

Though she admits that Undercover started as “something between a business and a hobby,” when two of her daughters were diagnosed with celiac, Levy knew she had found her calling.

“I decided I wanted to develop a better-for-you gluten-free, allergy-friendly snack,” Levy explains. 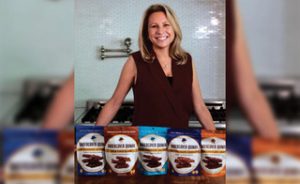 As her daughters had been diagnosed when they were already teenagers, Levy understood that it would be difficult for them to change their eating habits. She therefore made it her business to create something they could enjoy that was not too far different (and in many cases tastier) than what they had been enjoying to that point.

With inspiration from her daughters and support from her husband (who had worked with food companies for most of his career), Levy decided to combine their needs, his expertise, and her own love of food (especially chocolate) to make a product that would be more than just another sub-standard gluten-free snack. 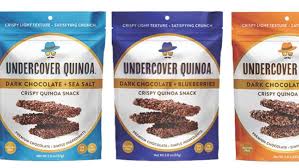 “At that time,” Levy remembers, “there were growing options in the gluten-free category, but they were mainly regular foods which were altered to have a ‘gluten-free’ variety…. I wanted to create a line of snacks…that were truly better than anything else on the market, but just happened to also be gluten-free.”

The result is a line of delicious snacks that combine quinoa goodness with the tasty addition of premium chocolate sprinkled with currants, seeds, sea salts and other flavorful fixins.

“This is still the absolute go-to, favorite snack not only for both of my daughters,” Levy says proudly, “but for all of their friends who have no dietary restrictions.”

While Undercover started small, Levy soon realized that, in order to maintain the quality and integrity of the product, she would have to build her own factory.

“I went from mixing by myself on the weekends in a rented commercial kitchen to my own tiny commercial kitchen in six months,” she recalls, noting that she had moved again to a 12,000-square-foot space within a year and is now looking for even more space to keep up with demand from gluten-free and unrestricted fans alike.

“We can currently run 40,000 bags per day,” Levy explains, “and project needing to double that relatively soon!”

In addition to offering more chocolate snacks, Levy also hopes to expand Undercover to other flavors so she can satisfy even more people.

“We want to offer additional snacks… that are better-for-you [and] actually taste better then anything else you might already be snacking on,” Levy explains. “We want to make better-for-you snacking fun, silly, part of every day life with products that you choose not only because the ingredients and nutritional information is better, but because they tasted better!”

Matt Robinson has been writing, editing, and teaching writing for over 20 years and has published pieces on a wide range of topics. Read some of his writing at www.TheRobinsonReporter.com. He also talks about food (gluten-free and otherwise) on WBZ radio. Listen to some of his conversations at www.Matts-Meals.com).