From new gluten-free snack options to improved rates of diagnosis and increased awareness, 2018 was a year chock full of change for those eating gluten free. This year is bringing with it many new trends and exciting innovations to keep an eye on.

For that population, eating just a crumb of bread can cause intestinal damage and pain because their bodies launch an immune response to gluten, a protein found in wheat, barley and rye.

Laura Boone, a development manager for The Celiac Foundation, knows the pain of celiac disease. When she was first diagnosed at age 21 in 2011, it was hard. But life has become easier with more and better-tasting gluten-free snack options, she said.

Carol-Anne Parker, 45, of Stafford, Virginia, was also diagnosed with celiac disease in 2011.

She attributes the “widening our choices” to the “trendiness” of being gluten free and she is thankful, she said. People are going gluten-free more and more often for non-medical reasons, such as adhering to a certain diet like the ketogenic diet (which restricts all grains) or the paleo diet (which typically includes lean meats, fish, fruits, vegetables, nuts and seeds). Or, they just feel better when they pass on gluten.

One example of how the choices have widened involves macaroni and cheese, which Parker was not able to eat it until Annie’s brand introduced a gluten-free version a few years ago. Eating out has also gotten easier. “You see more and more gluten-free kitchens,” she said, “so cross contamination is lesser.”

And then there is gluten-free beer, a cherished change. An avid runner, now while Parker is out on the trail, she doesn’t have to go without.

Of her peers with celiac: “We should be able to crack a cold one,” she said.

More foods had the “gluten-free” label on them in 2018, and that number is continuing to grow, Boone said. These are products that have always been gluten-free, like water and grapes, but the marketing catches people’s eyes.

The same is true for restaurant menus. Items that have always been gluten-free are now marked that way, Boone said.

This labeling could be useful for people who voluntarily choose gluten-free because they feel better, or they are on a certain diet, but for those with celiac disease, new labels are not a fail safe.

The food item may be marked “gluten free” on a menu, but still have contact with gluten, Ceizler said. Or the kitchen staff may not be trained in how to properly handle items to ensure they stay gluten free.  “People with celiac disease need to be very careful,” she stressed.

Eating out requires “a lot of due diligence,” Boone added. Do they even claim to have “gluten free” options? What precautions are they taking in the kitchen? For example, would they use the same knife on your meal that they used to cut bread with gluten? Despite labeling, the onus still rests with individuals to ask the right questions, Boone said. She looks for small signs. If she asks about gluten-free options and the server responds: “sure we have low-glycemic foods,” she stops there and doesn’t order anything. A staff’s response and how seriously they take questions can serve as a guide to the precautions that kitchen staff take, Boone said.

Apps that help people find gluten-free food options have helped Parker. One allows her to scan the food’s UPC code, which reveals whether it is gluten free or not. The nice thing about her apps is that, like the app Waze Navigation & Live Traffic, they are user-driven, meaning somebody will find the food item, do research, scan and add it. The apps make navigating grocery stores easier for people with celiac disease, Parker said.

If you’re gluten free, must you be nut free?

Another trend last year was the lumping of gluten-free products with common foods people are allergic to such as dairy, soy, eggs and nuts. This might contribute to the “trendiness” of going gluten free, but not everybody is happy about it.

“That is my biggest lament right now,” said Marilyn Geller, CEO of The Celiac Foundation. “Life is tough when you have to eat gluten-free for medical reasons,” she said. “There is no reason that people with celiac disease need to ban these other foods too.”

I can raise money

More individuals than ever before took finding a treatment and cure for celiac disease into their own hands last year. There was a 44 percent increase in individual fundraising efforts since 2017, Geller said.

Parker is one such person. She wanted to raise money for celiac disease research, so she can live a more “normal” life— one where she doesn’t develop rashes, one of the effects of the disease for her. She’s also tired of searching for gluten-free foods.

“I would like to not have to think about, every time I go to grocery store, what’s in this,” said Parker.

So last spring, for the month leading up to Parker’s 45th birthday, she and her friend Nikee Harris put their heads together. If they could raise at least $500, they promised to shave their heads. The $4,300 they ultimately raised far exceeded their goal. A subsequent Facebook Live video profiled the head shaving. 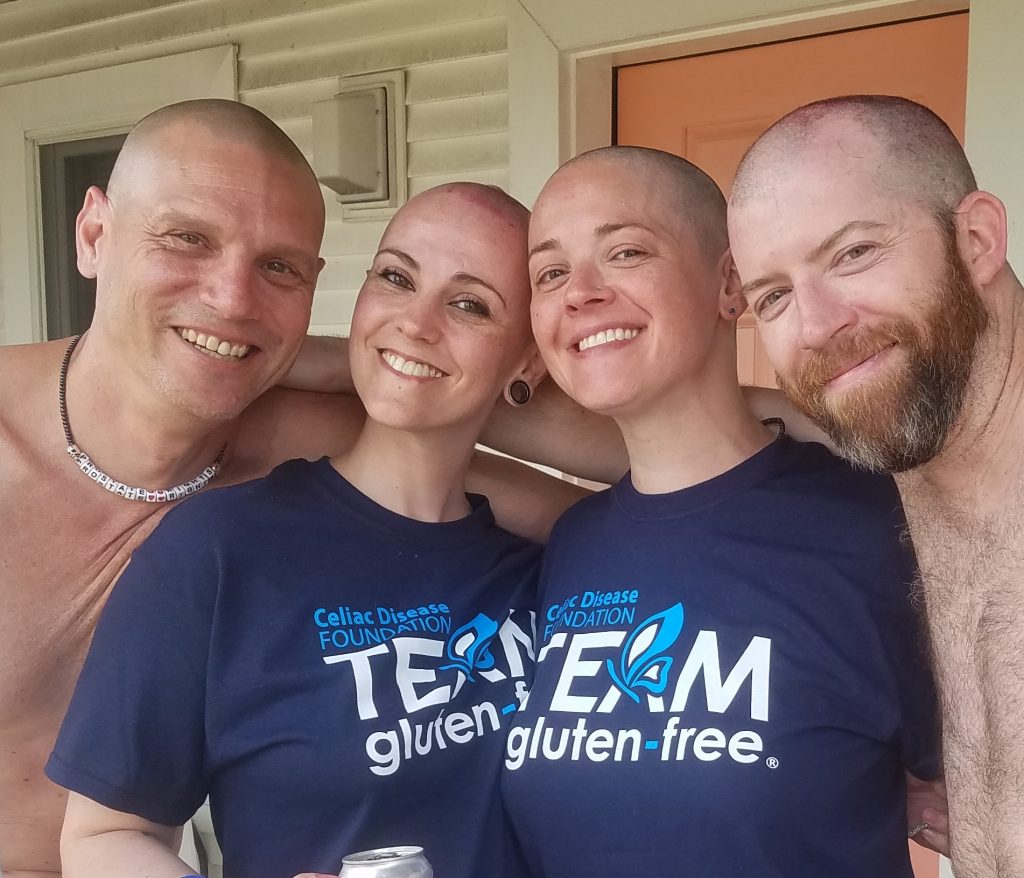 Parker is comfortable with a shaved head, which she is known for adorning with tiaras. Of the people who she encounters when wearing a tiara, she said, “Once the shock wears off, they ask about the hair and the tiara and it’s a great opportunity to talk to them about celiac.”

Physicians are not required to report celiac disease, so the exact number of Americans with it is not known, Geller said.

A blood test for celiac disease did not even exist before 1998, she said, and physicians were taught that it was a very rare, pediatric disease, so the vast majority of cases went undiagnosed. In 2004, the National Institutes of Health recognized celiac disease as a common genetic autoimmune disorder found in both children and adults.

Due to better education, available testing, and the gluten-free food rage, more physicians and patients are now aware of celiac disease, resulting in more physicians diagnosing it. There is also an increase in the number of trials examining celiac drugs, Geller said. This is important because current research shows that the inflammatory damage caused by celiac disease increases the risk of developing some bowel cancers and other long-term health complications, despite adherence to a gluten-free diet.