Since there are a lot of questions about the possibility of gluten-free Rice Krispies in the future, I thought I’d post a quick note here about what Kellogg’s has to say about it. 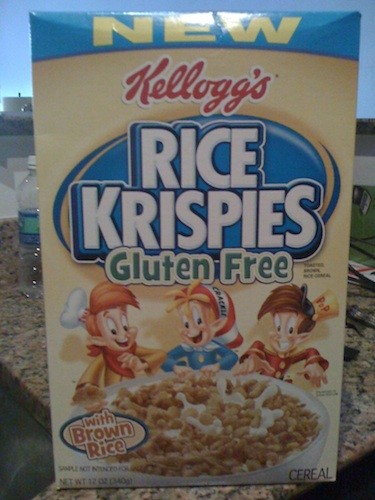 As you may already now, Ashley at Gluten Free Appetite somehow got a photo of a box for Rice Krispies that clearly shows a gluten-free label. On her blog she says Kellogg’s plans to debut a new line of gluten-free products within the next six months.

When I got in touch Kellogg’s for more information, Mike Morrissey, manager of brand public relations, said only that the company has not announced any new expansion to the Rice Krispies line-up.

“Our next batch of product news is expected to be released in May, and if we have any gluten-related news at that time, I will let you know,” he wrote in an email.

Morrissey did not deny that the company has plans to make Rice Krispies, other cereals and other products gluten free. So we’ll have to see what happens when the product news comes out in about three months.

I won’t be surprised if Ashley is correct and Kellogg’s is moving into the gluten-free market. It’s always seemed a natural to make Rice Krispies, in particular, gluten free. The only ingredient that stands in the way is barley malt flavoring.

When General Mills made several of its Chex cereals gluten free, the company removed barley malt and replaced it with molasses. The general public has not seemed to notice the change and most gluten-free consumers have been happy to be able to eat the cereals. We can’t say for sure if that kind of change would be part of any move Kellogg’s makes to produce gluten-free products.

On its website, Kellogg’s says at this time it does not make “any cereal, waffle, cookie, cracker, or vegetarian products suitable for consumers on a gluten-free diet.”

Reaction to Ashley’s news that Rice Krispies might finally be gluten-free has been overwhelming positive. Let’s hope Kellogg’s is listening.

One thought on “Gluten-Free Rice Krispies?”